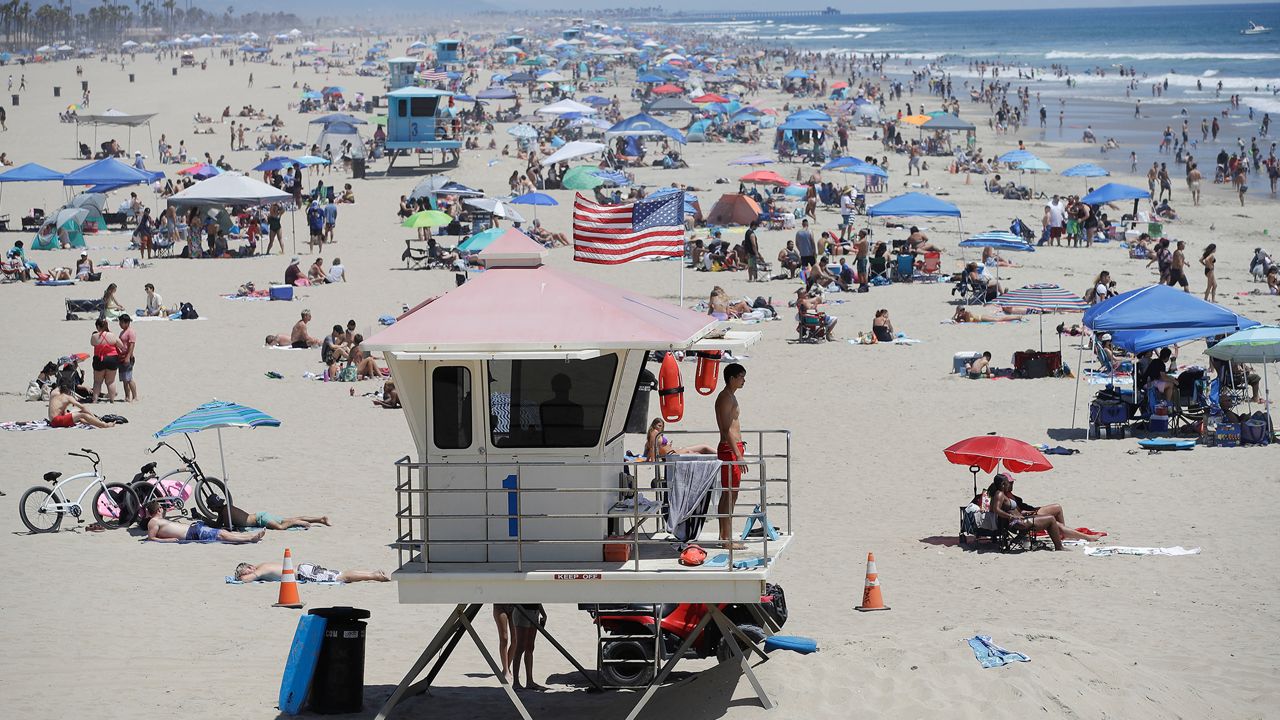 In this file photo from June 27, 2020, a lifeguard keeps watch over a packed beach in Huntington Beach, Calif. The Los Angeles County Department of Public Health is ordering L.A. County beaches closed from July 3 through July 6 at 5:00 a.m. to prevent dangerous crowding that results in the spread of deadly COVID-19. (AP Photo/Marcio Jose Sanchez)

Heal the Bay, an environmental advocacy group based in Santa Monica, released its annual beach report card to tell Southern Californians, Oregonians, and Washingtonians which beaches on the West Coast are safe and which ones aren’t.

“California beaches had excellent water quality during the summer months of 2019. Out of over 500 beaches across the state, 92% earned good marks (A’s & B’s) in the summer," the report states. "The past year saw lower than average rainfall, which led to an improvement in wet weather water quality grades. Less rain means fewer pollutants such as bacteria were washed into the ocean, which resulted in higher grades.”

One of the report’s authors, Luke Ginger, is a water quality scientist at Heal the Bay.

“Most beaches that suffer from poor water quality have a storm drain, which flows into the beach, or a river or stream,” Ginger said. “So if you go out to the beach, you should avoid any storm drains or rivers and streams.”

While some beaches get good grades, others make the “Beach Bummer” list.

“Every year we do identify the 10 beaches that received the lowest scores over the last year, and those go on our Beach Bummer list,” he said. “And the idea behind this list is to point out where potential water quality problems are so that local governments can focus on those issues and hopefully resolve them.”

“A lot of these water quality issues that we have at the beach are a result of our sewage infrastructure,” he said.

The stay-at-home order during the novel coronavirus pandemic did not positively impact California beaches.

“You might say the number of people at the beach impacts water quality the most. That does have a little impact, but the biggest impact is leaky sewer pipes, sewage main breaks, sewage spills,” Ginger said. “Things like that really impact water quality, and since we're all still at home, still using the restroom, those problems still persist.”

Ginger said there’s also a potential for coronavirus to be in ocean water.

“Coronavirus has been detected in sewage and has been detected in sewage-contaminated water; however, there haven't been any cases of people catching the virus in those ways,” Ginger said. “And it's probably mainly due to the virus just being diluted once it gets in the ocean. So the risk of getting infected from swimming in water like that is probably low. I'll just add on top of it, you shouldn't be swimming in sewage-contaminated water to begin with.”

Heal the Bay had to cancel its group beach cleanups during the pandemic.

“There have been less people out on the beach, so you think that there would be less trash; however, most of the trash ends up at the beach because it comes from more inland areas through the storm drain system,” Ginger said. “So even though there’s nobody physically on the beach, or there wasn’t for a few months, all of the trash that was being deposited on the ground inland was still making its way out there. So I'm sorry to say that it didn't have a positive impact on trash likely.”

There’s an increase in trash on the beaches as people litter disposable gloves and masks, Ginger said. He added that gloves “look like a nice, tasty jellyfish to a sea turtle, and these items contain a lot of plastic and break down into small, tiny bits, which all the critters in the ocean try to eat.”

“I've done some cleaning up around my neighborhood, and instead of picking up plastic bottles or coffee cups, I’m picking up a lot of gloves and masks that have been discarded on the ground,” Ginger said. “So there seems to be a situation where we just traded one type of litter for another. I would be hesitant to celebrate the positive impacts that the pandemic has had on the environment, and that's because a lot of this pollution, plastic or bacteria just comes from inland, which we're still living here, so it’s still a problem.”