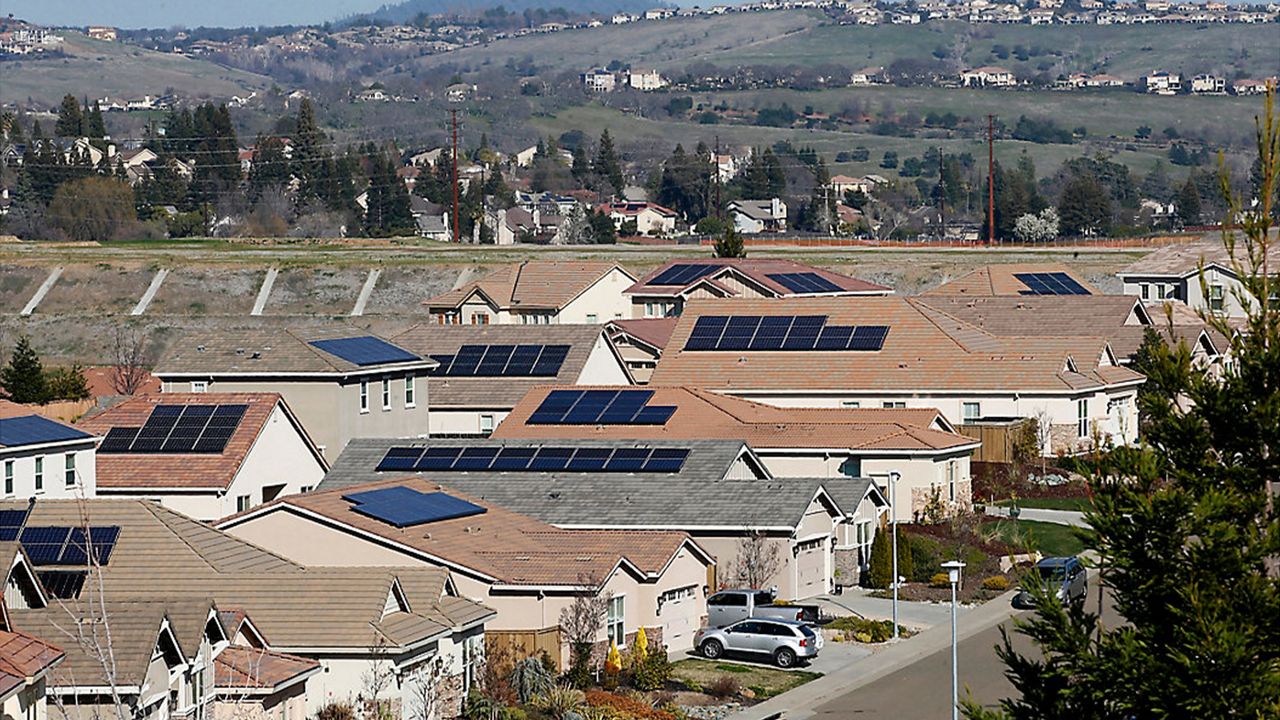 This Feb. 12, 2020, file photo, shows a housing development in El Dorado Hills, Calif. The coronavirus outbreak has delayed income taxes, mortgage payments and even evictions in California. But Gov. Gavin Newsom did not delay the property tax deadline for the state's homeowners to pay their property taxes without a penalty. Some counties did delay the deadline, while others say they will on a case-by-case basis. (AP Photo/Rich Pedroncelli, File)

“There’s about six million rental units in the State of California. Approximately three million of those rental units are in buildings that are between one and five units, and clearly those particular landlords -- we sort of call them mom and pops, which are really independent rental owners -- are probably more impacted than anybody,” he said.

If two residents in a four unit building cannot pay rent, that means 50% of the landlord’s monthly revenue is gone. That makes paying the mortgage, insurance, and other expenses difficult.

85% of renters in CA will not be able to pay their rent this month due to the COVID-19 pandemic, according to Tom Bannon of @caanet.

This will greatly impact small landlords with less than 6 units. A landlord with 4 units loses 50% of his/her revenue if 2 renters can't pay rent. pic.twitter.com/SS77OhKDPL

Unfortunately, federal funding wasn’t given to mom and pop landlords. Smaller landlords could have benefited from stimulus money to help makeup for lost rent.

“All the federal programs really excluded those smaller independent rental owners. It’s all based upon an IRS definition of that investment, and so there was no ability for them to access those federal funds even when they were available,” Bannon said. “Additionally, there just are not any resources that are currently available for landlords.”

Bannon said landlords are reflective of the general population.

“You have some landlords that are financially stable, and they could probably weather the storm for a while like two to four months. Then you have a number of landlords who are basically sort of living almost paycheck-to-paycheck and mortgage payment to rent payments, so there's really not a whole lot that can be done other than they are trying to get to their banks to see if the banks will grab them some type of forbearance.”

In this case, banks have the option to help landlords. Banks have no obligation to bail landlords out at this time.

“There's no regulations that require the banks to grant forbearance or forgiveness on these mortgages,” Bannon said.

Independent rental owners might have to foreclose on their properties if they cannot pay their mortgages.

“One is a non-judicial foreclosure, which is the vast majority of the mortgages, which basically means you don't have to go to court to start a foreclosure procedure. There is about 120 days where there is a time where the owner has to begin to make up those mortgage payments,” Bannon said.

“If they don't, the banks can basically foreclose and literally put the property up for sale. And there's really no court interaction at that point in time. That's just because the mortgage specifically states that if you don't pay the mortgage, the bank can sell the property out from underneath you.”

Some landlords bought their properties as investments.

“A number of your smaller independent rental owners, a lot of folks basically put their life savings into their property, and it is their retirement. Is it a gamble? Sure,” Bannon said. “But the reality is, housing is an important component of our society, and if in fact it's that important, we are hopeful that the state government will step in and do something about it and provide some sort of housing vouchers so that everybody wins, both the residents and landlords.”