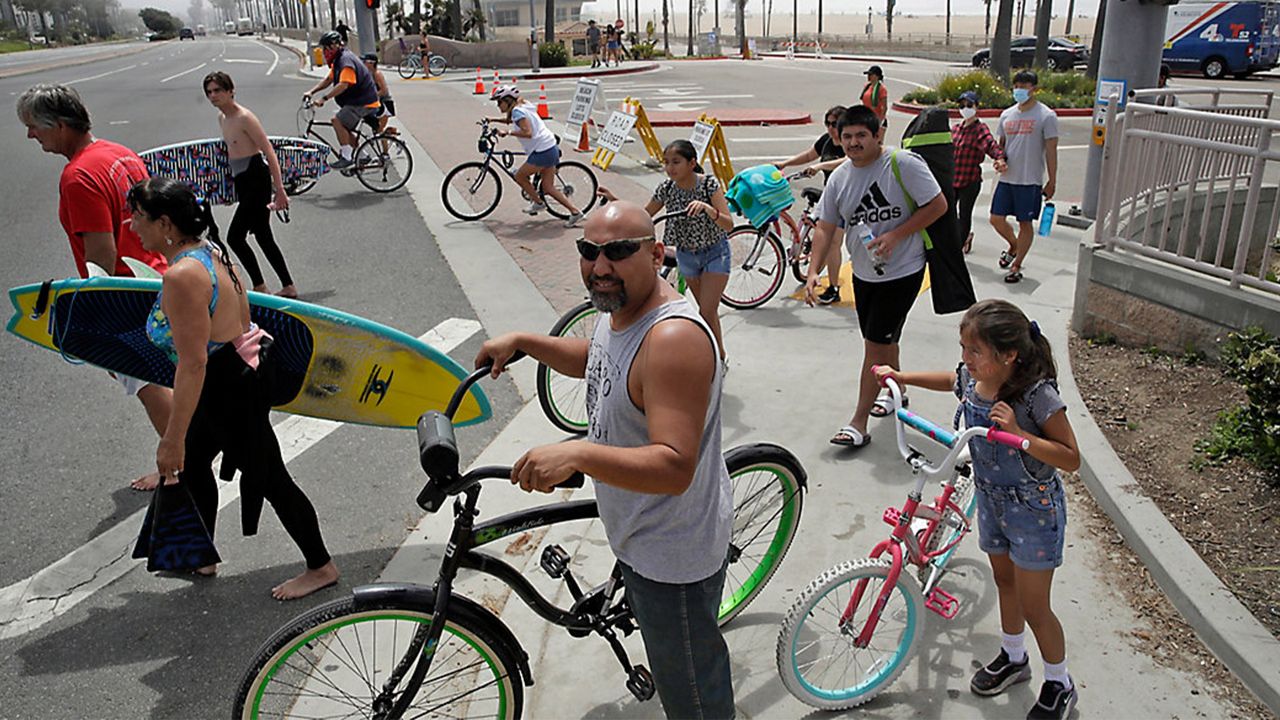 California’s COVID-19 Cases Decline, But Could Spike in Early May

"Emergency departments are not overrun. ICUs are less than 100 percent capacity. We have bent the curve, believe it or not."

Andrew Noymer, Associate Professor of Population Health and Disease Prevention at the University of California, Irvine, has been tracking the number of novel coronavirus cases and fatalities in the U.S.

California COVID-19, By The Numbers:

“We have seen the death numbers for all causes in Orange County more or less holding steady,” he said.

"Emergency departments are not overrun. ICUs are less than 100 percent capacity. We have bent the curve, believe it or not."@AndrewNoymer of @UCIPublicHealth said Southern Californians have bent the curve and limited the COVID-19 mortality by adhering to the stay-at-home order. pic.twitter.com/oJLagL5dog

As of Tuesday, Orange County Public Health had reported 42 deaths related to COVID-19.

“I’ve analyzed the data of Orange County deaths for other causes, and we aren’t seeing any increases that mystify us,” Noymer said. “We’re not seeing what New York City is seeing, so that's really good news. I think in Southern California, because we’ve bent the curve, we have actually done a pretty good job of limiting the COVID mortality so far to that which has been reported.”

RELATED | Coronavirus Updates: What to Know in SoCal

Noymer said he’s “apprehensive” about lifting social distancing orders because there’s a possibility for a second wave of novel coronavirus cases. He says we might see a spike of cases in May that would be a result of Easter gatherings.

“If there were cases generated on Easter, we’re going to start seeing them now. And if those cases generate cases, we’ll see them around May 1st or May 2nd, so coming up,” Noymer said.

While Noymer said he’s seeing a lot of people wearing masks, he’s also seeing more people out in public. Thousands of people flocked to Newport Beach last weekend for some fun in the sun. Newport Beach City Council decided to keep beaches open for the next three weekends despite the large crowds.

⤴️ This is in the realm of speculation, but when I see photos of people in Southern California at the #beach, I see lots of SARS-CoV-2 transmission.

BUT... I also see lots of UV from sunlight... possibly reducing inoculum size... which can reduce severity...

Noymer predicts that over the next three years, there could be 1.2 million deaths caused by COVID-19 in the U.S. He says some deaths that have been recorded this year have been miscategorized, which means the number of deaths related to the novel coronavirus are higher than what we’re even seeing now.

“There's a lot of deaths in a country the size of the United States. In a normal year, there would be about three million deaths. That’s a lot of death certificates to sort,” he said. “In New York City, we've already seen that the deaths that were recorded as COVID-related were about three-quarters of the total that we now think were COVID-related.”

Noymer said when New York City officials looked through the death certificates that they’ve issued in the last several weeks, they realized that they’re issuing far more than normal. Several deaths have been attributed to pneumonia.

“Pneumonia death is not particularly unusual. There are 75,000 pneumonia deaths potentially every year in the United States, so it’s not an unusual cause of death, and certainly people who are in the hospital with COVID-19 do have pneumonia as their final symptom,” he said.

If no test was performed on a patient who had all of the typical novel coronavirus symptoms, COVID-19 will not be recorded as the cause of death.

“If there was no test done, the hospital may err on the side of being more vague and just record the death as pneumonia,” he said. “We have to wait until all the numbers are in before we can really say how many people have died of COVID, and the New York City numbers have already been revised upward in a significant fashion.”

In the long run, Noymer said winter will probably evolve from “flu season” to “flu and COVID season.” He said COVID will not vanish anytime soon because it’s too ingrained in the human population.

“When the virus first emerges, it’s so novel, and it has the power to sort of push through any seasonal effects. But in the long run, these respiratory viruses are much less transmissible in the summertime, and so we could see a ‘flu and COVID season’ every winter instead of just the flu.”

Noymer said we will eventually treat COVID-19 like we do the flu.

“We don’t go into social distancing every winter because of the flu. If we did, we would have no flu season, but we would also have kids whose school year is interrupted and we make the decision that we’re not going to do that,” he said. “COVID’s just going to become part of the epidemiological background. People most sensitive to it will get a severe infection; some of them will die. But then in the long run, it’ll just be part of life and it won’t be as big a deal.”

For the time being, Noymer said the best thing for people to do is wear a mask.

RELATED | COVID-19: Pediatrician Gives Tips on What to Look Out For in Children

He said it takes 1,000 viral particles to make an infection. Masks serve as a barrier between people and particles.

“A droplet that you inhale might have 10,000 or 100,000 viral particles, and so that bandana over your face could reduce it to 2,000,” he said. “So it’s still enough to make you sick, but it gives your body a better head start. That’s what makes for a milder syndrome.”