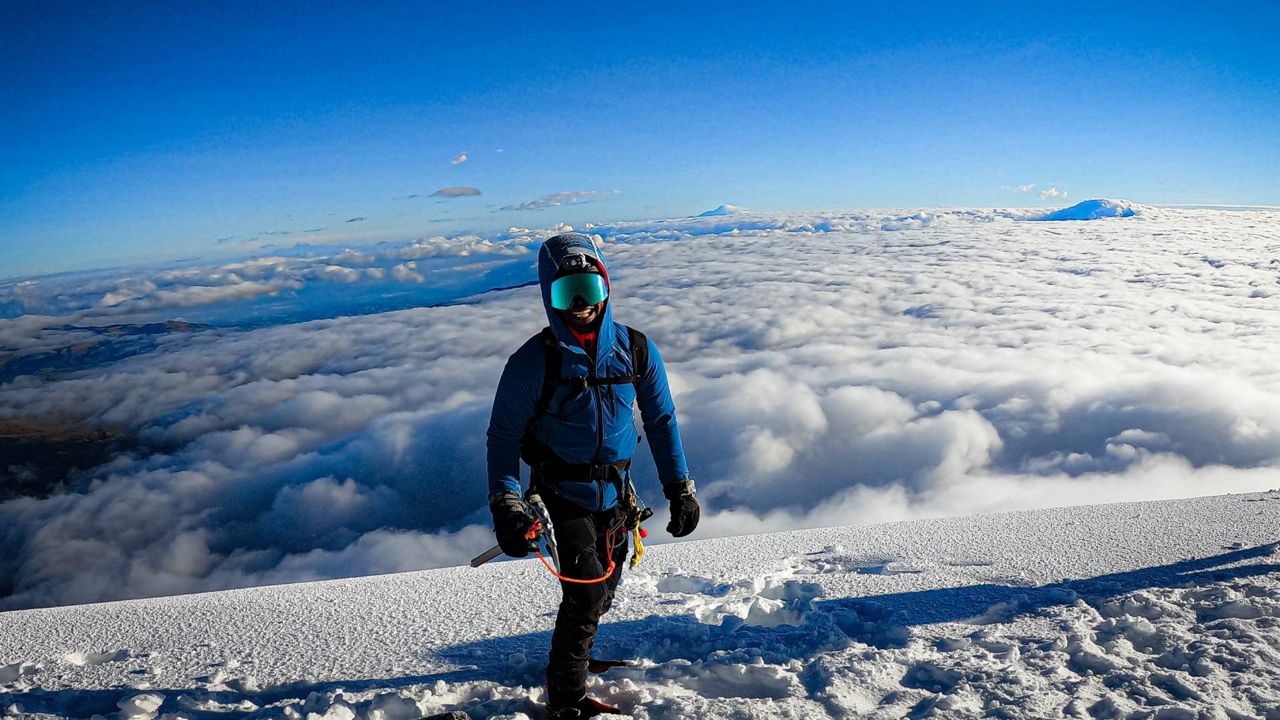 Climbing 14 of the world's highest peaks with a purpose

LOS ANGELES — Andrew Alexander King is the first person in his family to get into climbing.

And now, the 34-year-old who lives in Los Angeles is trying to set another first in the mountaineering world.


King has been training all over the world and climbing indoor walls to get prepared to climb the 14 highest peaks on each continent — both mountains and volcanoes. He has already climbed 50 peaks around the world in preparation.

King explained that the first time he climbed a wall was when he was about 6 or 7 years old at Camp Snoopy at Mall of America. He said it wasn’t until he was a teen when he was adopted by his grandparents and moved to Hawaii that he first climbed something in nature.

And you could say it was true love.

"It makes me feel connected with the earth and the people," he said.

King added that when he started climbing more, including international destinations, something became very clear to him.

"I didn’t see anyone that looked like me," he said. "Everyone would stop me and be like, 'You’re the first Black climber I’ve seen on a volcano or mountaineering.'"

Now, King is trying to become the first African American to climb the highest peaks on each continent.

“How hard it is? Um, very hard,” King said while laughing, adding that “having a full-time job and training 30 hours a week,” it’s not going to easy.

King works in technology, and his job allows him to work remotely. While it will be a difficult physical journey, King noted that the more difficult challenge will be to climb with a purpose.

"Being the first African American means nothing if I’m the first and only. It’s more about not being the last," he said.

King added that he hopes to show future generations they can do anything they want, even if they may not see many people who look like them doing what they strive to do. He said he hopes his journey encourages more inclusion in the outdoor space, “not just color, but cognitive representation, diversity, gender diversity.”


King's next stop will be Mount Kilimanjaro. Before he took off for his journey, King made a stop at Sender One, an indoor climbing gym in LA where King does some of his training.

Katie Bay Woodbury is the gym’s community manager and, like King, works to create programs to make climbing more inclusive. She said her goal is “to make everyone feel comfortable when they come in here.”

Woodbury also said she is excited to see King taking a mission of inclusivity global.

"He’s determined, and he’s gonna do it," she said.

King’s goal will take about eight to 10 years to complete because he plans to spend time at each location to work with local nonprofits.

“You can be more than a climber," he said. "You can help people climb their own initiatives and combat their own issues, if you so choose."

It’s what drives King to climb a path that he hopes inspires others to follow.

After Mount Kilimanjaro, King is headed to Europe. You can follow along his journey on his Instagram or at The Between Worlds Project.