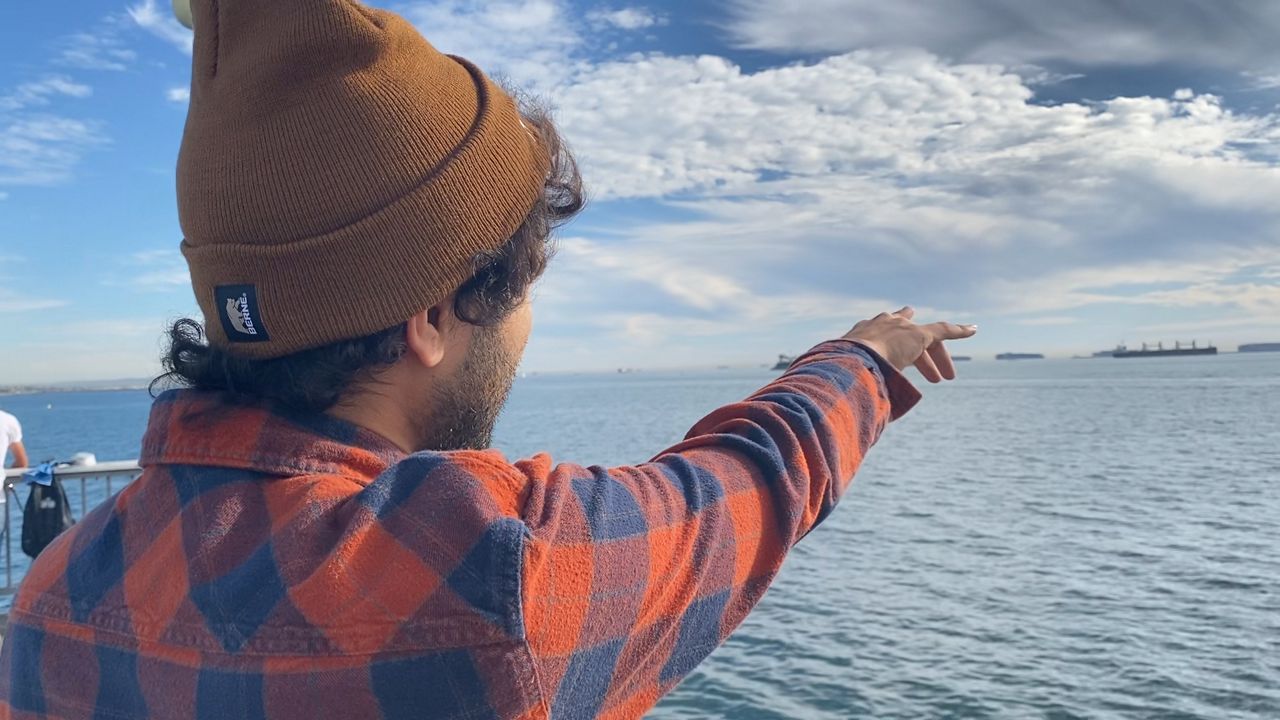 Dawny-all Heydari works full-time as the campaign lead for Ship It Zero, which is dedicated to reducing carbon emissions at ports. (Spectrum News 1/Chace Beech)

Ship It Zero aims to set sail on low-carbon cargo

The 25-year-old environmental activist works full time as the campaign lead for a new organization called Ship It Zero, which is dedicated to reducing carbon emissions at ports.

Cargo ships have been idling at the port of Los Angeles for months due to the backlog caused by labor shortages, supply chain problems and the ongoing ripple effects of COVID-19. And according to Heydari, the ships are polluting the sea and air, particularly in neighborhoods adjacent to the ports.

Pacific Environment, the parent organization for Ship It Zero, focuses on protecting communities in the Pacific Rim from pollution and climate change.

For years, as Heydari explained, shipping hasn’t been at the top of environmentalists’ priority lists.

"They travel the seas and dock at ports. Most people don’t realize just how harmful fossil-fueled shipping is for our future," she said.

According to the International Maritime Organization, cargo vessels emits close to 1 billion tons of CO2 globally each year. Shipping typically use a low-grade oil called bunker fuel, a residual fuel that is a byproduct from refineries.

“It’s the cheapest, most dirty oil on the market," said Heydari. "When these ships near the ports of Long Beach and Los Angeles emit fossil fuels in these port adjacent communities, they’re dumping toxic chemicals into these neighborhoods."

But thanks to a globalized economy and even more reliance on shipping due to the pandemic, Heydari and other Ship It Zero activists are pushing Ikea, Target, Walmart and Amazon to commit to moving to zero-carbon ships, which are currently in development.

"Amazon, Ikea, Walmart and Target can commit to setting sail on these ships, to send the market signal in the direction of research and development," she said.

Turning to zero-carbon shipping would impact global greenhouse gas emissions, but it could also have a major impact in West Long Beach.

Chris Chavez, the deputy policy director at the Coalition for Clean Air, said the neighborhoods of West Long Beach are battered with pollution from the ports, oil rigs and the continual stream of trucks that move through the area. And the backlog of ships has made matters worse.


The smog and chemicals have already had dire consequences.

"We have a six-to-eight-year shorter life span in West Long Beach than we do on the shorter side of the city," Chavez said. "A big part of that is the pollution."

Despite the grim data, Chavez remains optimistic about the future of shipping and industry at the ports.

"Everyone wants to see zero emissions, but the desire to get to zero emission shouldn’t abrogate what the ports can do now to clean the air," he said. "They can deploy technology now that’s gets us to that goal…cleaning up cargo handling and overall operations."

As the ships have lingered off the coast, city officials have begun to put pressure on the ports of LA and Long Beach. In October, the LA City Council passed a resolution calling for 100% zero emission shipping at the ports by 2030.

Heydari is grateful for the city’s action but said the real power is in the hands of consumers.

“These companies are reliant on our purchases. If enough of us come together and say enough is enough, the climate emergency is upon us, people are dying near ports, we need change, these companies will act.”