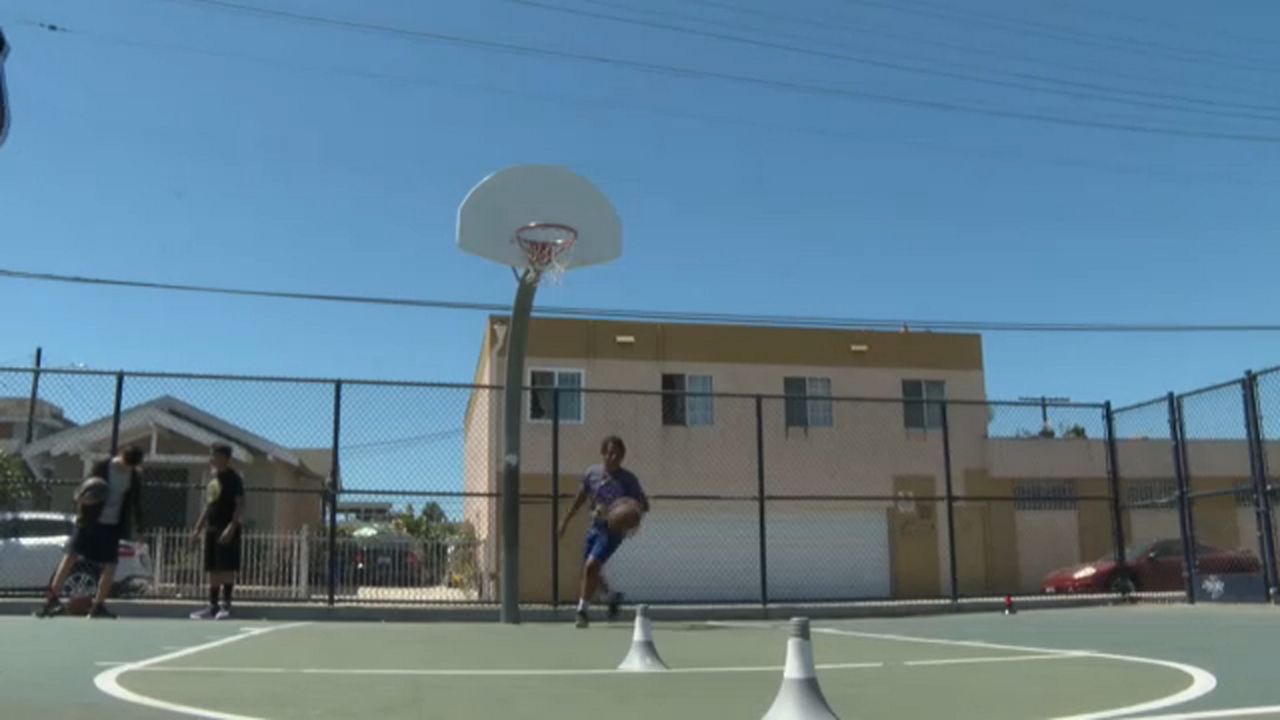 LONG BEACH, Calif. — Twelve-year-old Steven Sheppard has been playing on the 14th Courts in the Washington neighborhood of Long Beach since he was a young kid.

"I’ve been playing since I was three with my grandpa in this court right here," he said. "[Now] almost every day, we’re either in this park or in Lynwood just hooping around."


Steven can often be found dribbling, passing or shooting with his friends from the neighborhood or as part of a unique summer program called Books and Buckets. The youth sports academy was started by another kid from the Washington neighborhood, David McGill-Soriano, who — like Sheppard — also used to spend the majority of his free time out on the basketball courts.

"It came when I was growing up right here in the Washington neighborhood," McGill-Soriano said. "There were no youth programs, no youth center, no leagues, and I wanted to be a part of something."

Back then, McGill-Soriano used to take an hourlong bus ride out of the city to participate in a youth academy. It's something he says changed his life for the better that he wanted to bring back to his neighborhood.

"When I got older I was thinking, man, what if our neighborhood had that?" he said. "What if I didn’t have to take that bus ride and all of that?"

Years later, McGill-Soriano did just that. Once he graduated from college, he returned to the neighborhood and brought some of his peers along with him.

In 2021, Books and Buckets was born. The program combines an academic component complete with group discussions, assigned readings and guest speakers, with a unique basketball academy in partnership with QuickSand Mindset.

"It’s a great program with lots of responsibility because you have to practice but also read, so you can educate yourself in life," Steven said.


But more so than just developing for their futures, it's also a means to keep the kids safe in the present. The Washington neighborhood is a place where McGill-Soriano says gang culture is unavoidable. Kids like Steven have already experienced it.

"We had neighbors that were bloods," Steven said. "There’s a lot of gang violence, and they wanna influence you to do bad things."

It's that fact that keeps McGill-Soriano motivated every single day.

“Our youth were watching and our youth know them," he said. "They go to school with them. So if this program wasn’t here, they might be a part of that.”

By being back on the courts together, they gain more than just basketball knowledge. They gain community.

"We’ll pass them the ball and they can take a shot," McGill-Soriano said. "We give them the tools so they can help solve some of the problems in this neighborhood."