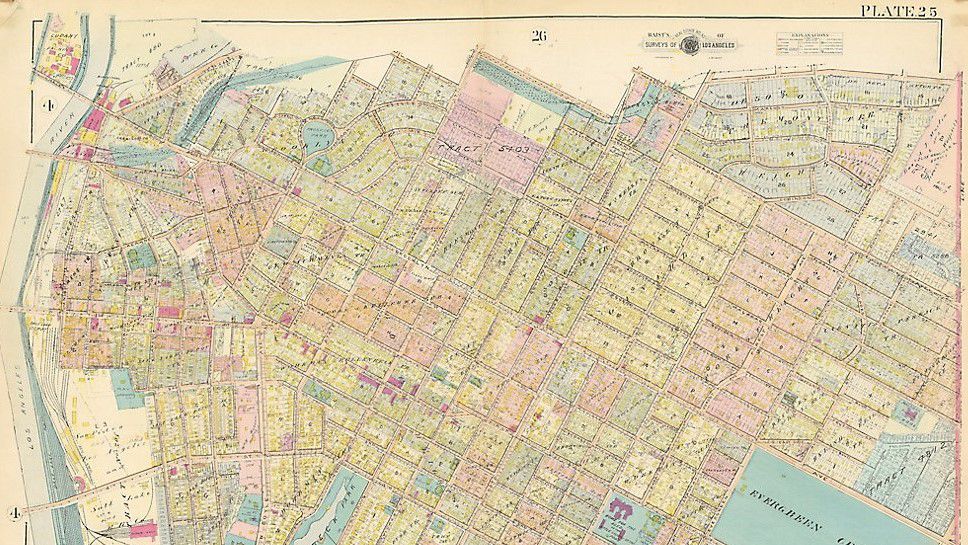 EDITOR'S NOTE: The story has been updated with video by multimedia journalist Chace Beech. Click the arrow above to watch the video. (June 14, 2021)

The history of Boyle Heights is wild and varied, multi-layered and multi-faceted. Although now it's known largely for its significant Chicano population, the neighborhood has long been an enclave for immigrants and minority groups — including, for much of its early history, Los Angeles's Jewish population.

In May, UCLA's Leve Center for Jewish Studies launched an exhibit exploring the "Jewish Histories in Multiethnic Boyle Heights" — curated by historian Caroline Luce, Associate Director of UCLA's Alan D. Leve Center for Jewish Studies. The exhibit is part of the Mapping Jewish LA project, a partnership between the Leve Center, UCLA Libraries and Special Collections, the University of Southern California, and community archives across the city.

Physically, the exhibit is installed at Boyle Heights History Studios, on First and South St. Louis streets, blocks away from Mariachi Plaza. But a dense and expansive digital exhibit lives online, as an effort to "remix" the physical exhibit, to explore it in different ways, Luce said.

"Unlike a [physical] space, where you set things side by side, you have to rethink how to navigate through the material," Luce said. The digital exhibit lays out the history in various ways, including an introductory essay that provides an overarching history of Boyle Heights and a multi-layered map that allows viewers to explore the space of the neighborhood.

The idea, Luce said, is to point out that many of these structures are existing, repurposed, and serving the community in other ways.

"The hope is that maybe by reminding people of these interconnections of these institutions that we might facilitate a kind of solidarity building and coalition building," Luce said.

Almost every historic site in Boyle Heights has more than one layer of cultural history, said Shmuel Gonzales, the founder of Boyle Heights History Studios. The Paramount Ballroom, for instance, was once the hall of the Jewish Bakers Union. Over the years, it evolved as a space for organizing laborers and immigrant rights activists, well before it became a music venue and home of the neighborhood art conservancy.

"I think we take for granted that this neighborhood in Boyle Heights and South LA, during the time of Jim Crow, had this amazing diversity that happened in these communities," Gonzales said.

The story of Boyle Heights is one of community strength: the collective action of people — Chicanos, Japanese immigrants, Ashkenazi and Sephardic Jewish people — who found their way to the East LA neighborhood and found common goals. It's a story of how communities are cultivated and how people find their place among people who aren't always like them.

"Not just Mexican Americans — though we're proud of our Chicano history — but I think it's profound that we're able to tell not just our immigrant story, but also our coming of age in terms of political and civil rights organizing that really gets done in Boyle Heights," Gonzales said.

The key to this exhibit was collecting stories from across the community — the kinds of stories that lived tucked away in basements and in peoples' memories.

"My hope is that, as people work through the exhibit, they will see or be impressed by the many community leaders within their neighborhood — and without — who were pursuing similar goals," Luce said.

The "Jewish Histories in Multiethnic Boyle Heights" digital exhibit can be found here. The physical exhibit may be seen at Boyle Heights History Studios, 2026 E. 1st Street, Los Angeles, which is open Tuesday through Sunday.