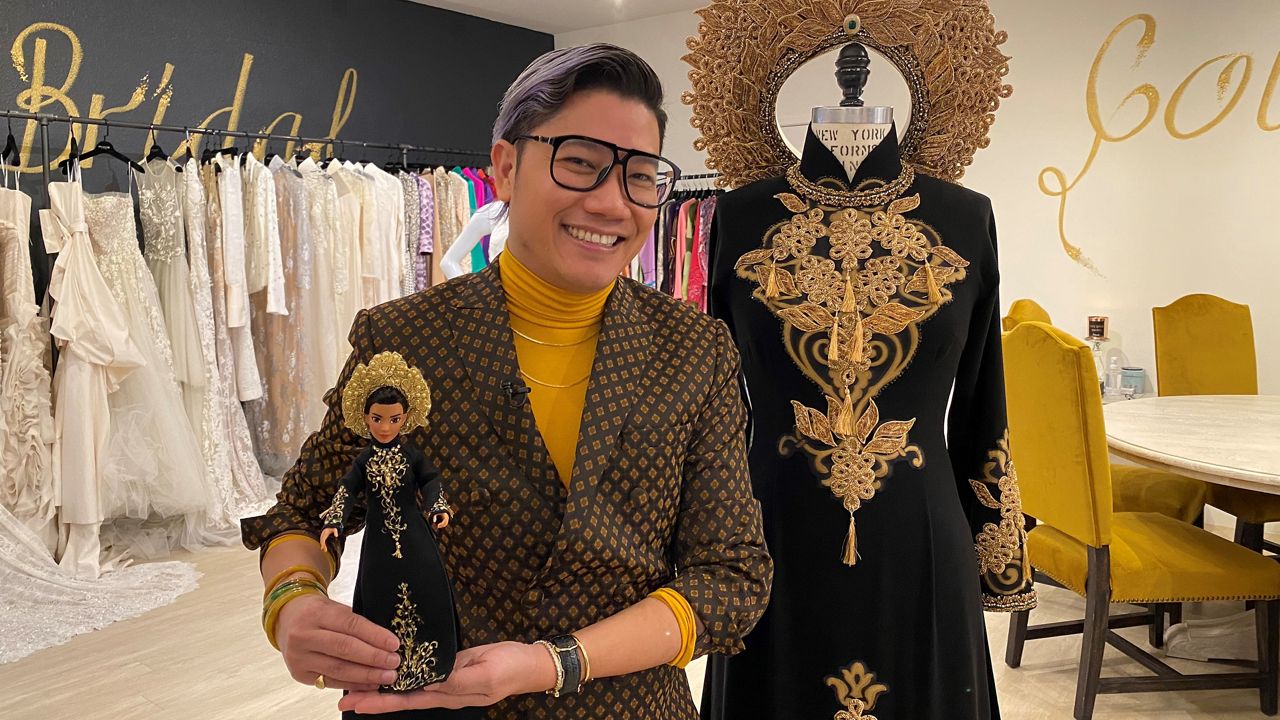 COSTA MESA, Calif. — He learned how to sew at the age of 9, but it still took Thai Nguyen some time to find his place in the world of fashion.

"As a Vietnamese American designer, it's really hard to survive, have a business or build a brand in the fashion industry in the mainstream," Nguyen said.

The fashion designer said he knew he was meant to become an artist. But, despite having success dressing the stars in the Vietnamese community, it was hard to break into the American mainstream.

"All the other publicists were like your name was too Vietnamese. You need an American first name," Nguyen said.

Connections led Nguyen to meet actress Kelly Marie Tran who catapulted to stardom in two Star Wars films and was most recently the leading voice in Disney's "Raya and the Last Dragon," where she plays Disney's first Southeast Asian princess.

Nguyen said the actress texted him three days before the virtual premiere of "Raya," asking him to make her an áo dài, a traditional Vietnamese dress.

"I literally woke up and jumped out of bed, and I was like, 'What is this? Are you serious?' It's been my dream, my biggest dream to put the authentic áo dài on the mainstream red carpet," Nguyen said.

As soon as Nguyen hung up the phone, he and his assistants got to work. Hours and hours spent hand-stitching metallic appliqués and bedazzling the áo dài with black Swarovski crystals. To top the elegant dress off, Nguyen created a bold headpiece that featured an emerald. Nguyen said he made a dress fit for a queen for an actress who was playing a princess.

Nguyen recalls the moment when Tran wore the dress for the first time before the premiere. The two were holding hands.

The fashion designer is raising money to create what he calls a tiny áo dài doll to celebrate this moment with the AAPI community.

"Vietnam has a rich history that deserves to be recognized and represented within our social fabric. Vietnamese girls and boys deserve to see their culture being celebrated and to exist as a standard of beauty. Help me send a powerful message to Vietnamese children that their moment will come because of who they are and where they come from, not in spite of it," Nguyen said.

He has raised about $35,000. His Kickstarter campaign has until June 1 to reach a goal of $55,000. Nguyen said the more money he raises, the less the dolls would cost to be produced.

"This is for the future generation. This is for our kids or maybe for our younger self because we didn't grow up with this. We didn't have this," Nguyen said.

Nguyen is promising to donate any leftover funds to Amanda Ngoc Nguyen's organization called RISE. While a student at Harvard University, Amanda Nguyen became a victim of rape and a broken criminal justice system. Determined to fight for the civil rights of sexual violence survivors, she wrote and advocated for the Sexual Assault Survivor Bill of Rights.

It took decades, but Thai Nguyen finally found his identity in the world of fashion. He hopes his tiny áo dài dolls will help future generations find themselves in the beauty of their culture. To support Thai Nguyen, visit his website.