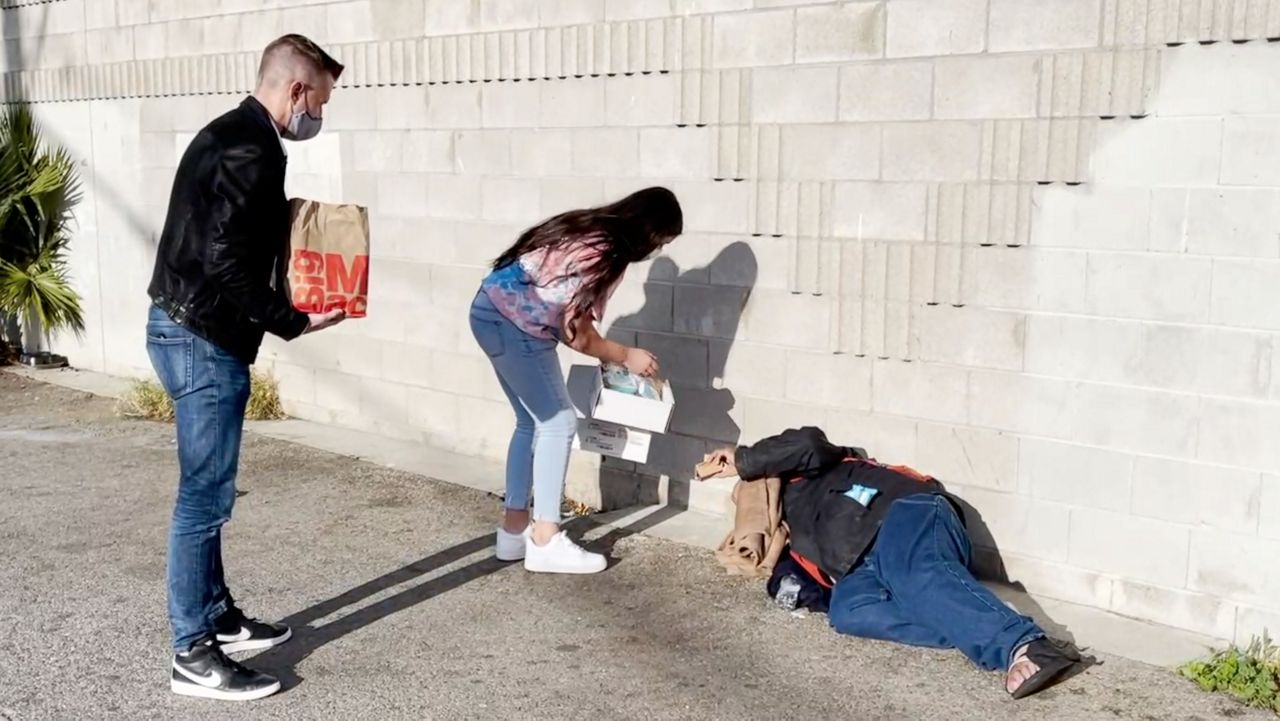 OXNARD, Calif. — While most of her friends are busy being kids, 12-year-old Emily Magaña is laser-focused on one thing.

For months, she's been knocking on doors all over her neighborhood, hoping to make a little extra cash.

"I bake cupcakes. I wash cars. I do chores around the house. I go to my friends and family, even my neighbors," she said.

On this particular chilly afternoon, she scored a lucrative gig washing her uncle's car for $10.

"If you've ever done something, and you're like, 'Yes, I'm finished, and it looks so good.' I'm proud of myself!" she said as she put her final touches on the car.

But Emily isn't planning on keeping any of her hard-earned cash. Instead, she's giving it away to strangers.

"I was originally going to do Disneyland, but my teacher, Ms. Lopez, inspired me to do something I most love," she explained.

The thing that Emily most loves is helping people. After all, she's been doing it for almost a decade. And so, when it came time for her sixth-grade passion project, she decided to ditch Mickey and Minnie and instead spend all her money on 100 self-care kits for the less fortunate.

This past year has been challenging for Emily, as her entire family got sick with COVID-19. Her dad had it particularly hard. Thankfully they all got through it. Her mom, Rocia, said it was rough, but there was at least one silver lining.

"Sometimes, as a mom, we can doubt ourselves," Rocio said. "But by me seeing her help others, it makes me feel like I'm doing a good job as a mom."

In less than two months, Emily managed to save a total of $300, enough to complete her project. Her mom drove her to the Ventura Country Rescue Mission to deliver the goods.

Emily's only request was a quick stop at McDonald's on the way — not as a reward for a job well done, but to buy 20 six-piece chicken nugget meals to hand out along with her kits.

For Emily, it's a matter of acknowledging those who are rarely seen.

"I put hygiene and cough drops and things like that for them to care for themselves and to know that they're not invisible," she said with the maturity of someone four times her age.

The gifts are accepted with open arms at the rescue mission. The pandemic has exacerbated an already unprecedented homelessness crisis, and so everything bit helps.

And if you thought for a second that Emily was just dropping things off, think again. This 5-foot-3-inch tween took her box and her nuggets and personally delivered as many of them as she could.

"She's great. She's going to make an amazing woman," said Shante Parsons, who said she's been living in an encampment near the rescue mission for two years.

At the end of the long hard day, Emily heads home. And even though her school project is over, she's already planning ahead.