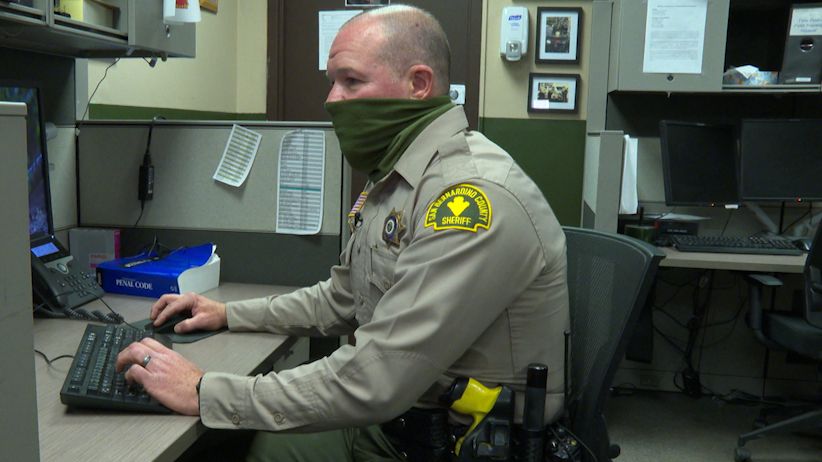 SAN BERNARDINO COUNTY, Calif. — Snow was still on the ground outside of the San Bernardino County Sheriff station in Twin Peaks, but for Deputy Sheriff Chad Zerbe, the smell of spring is in the air.

“Usually, I start to get antsy in the middle of the February because that’s when I’d report, or the beginning of March,” Zerbe said.

That’s because for years, right about now, he’d be getting ready to report to spring training and wearing a different kind of uniform. For four seasons, Zerbe was a Major League Baseball pitcher. He played on a Giants team that lost to the then-Anaheim Angels in the 2002 World Series.

He made three appearances (Games 2, 5, and 7) and in Game 2 went four innings, allowing four hits and only one earned run; a clutch performance that kept the Giants in the game.

"Electrifying," Zerbe said. "It’s difficult to put that kind of environment into words, but it was an incredible environment to be in and something incredible to be part of."

The adrenaline rush he used to get coming in to keep his team in the game has been replaced by, up to this point, an 8-year career of saving his community from difficult real-life situations.

“You have to understand how to play as a team player and not as an individual. Even though many times you’re out on calls by yourself, you’re still part of a team and doing what’s in the best interest of the victim and the sheriff’s department,” Zerbe said.

But Zerbe’s love for the game has never left him. He’s taking what he learned in a nearly 15-year career that began when the Dodgers drafted him in 1991 and giving back. He coaches local, young pitchers hoping to make it to the next level. So far, he’s helped about 100 high school players go on to pitch in college and beyond.

“It brings great pleasure to me, I mean, great enjoyment watching someone take what I was able to give them, to help them reach a level that they’re trying to get to,” Zerbe said.

And while he loves serving his community on the streets and the diamond, if he had his choice, he still might be reporting for spring training right about now, he said.

“A lot of great things I’ve done in law enforcement, but my true passion in life is baseball. And if I could don a uniform again one day, that’s where I would like to be is wearing a baseball uniform,” Zerbe said.