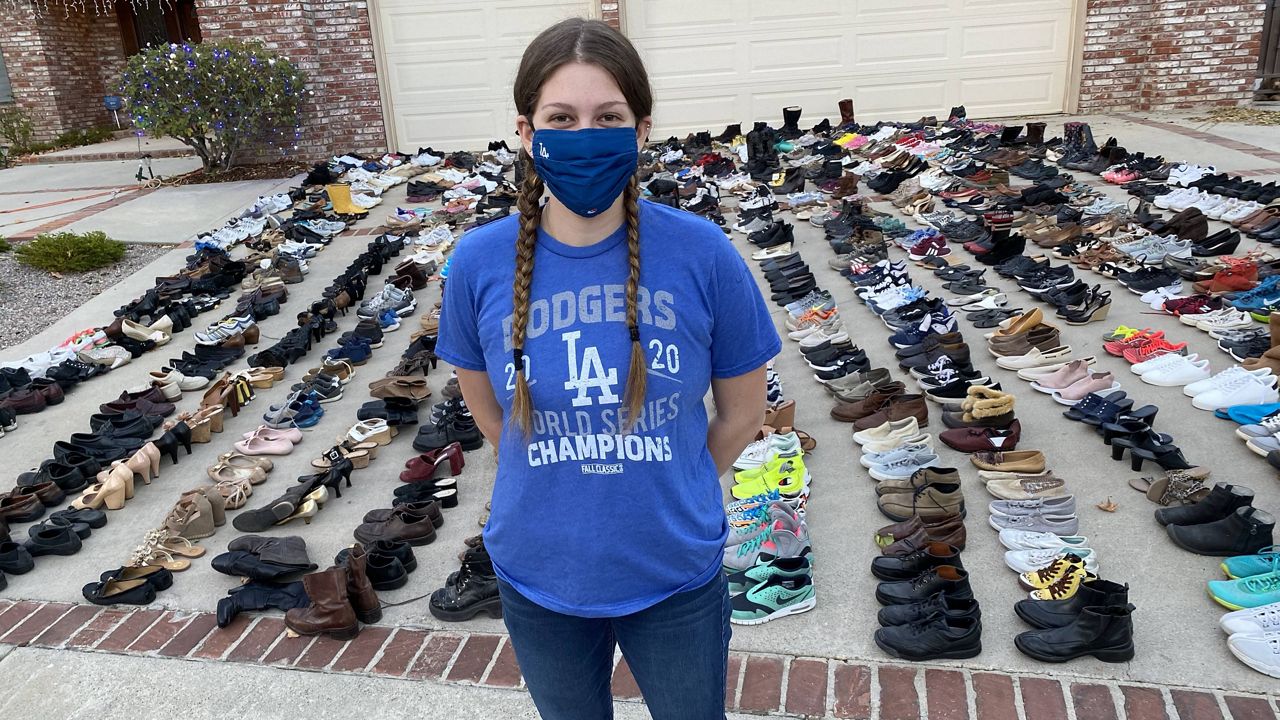 Lindsay Sobel has donated over 30,000 pairs of shoes to people experiencing homelessness.


Sobel, who is a junior at Sierra Canyon School, sorts the shoes – all of different kinds, colors, brands, and sizes – into neat lines, and then eventually places them into large trash bags for donation. The shoes all different kinds of colors, brands and of course sizes.

"I've got some men's size 22 Nikes, and I didn't even know people had feet that big!" Sobel said.

It all started with a trip to a Kings game four years ago, when Sobel saw the widespread homelessness around Staples Center and her eyes were opened to another world.

Sobel took action by starting a charity and called it, appropriately, Shoes for Souls.

It began as her Mitzvah project when she was 13, part of the ritual of a Bat Mitzvah – or religious initiation ceremony for a Jewish girl that has now grown into a movement.

Sobel’s charity donates new and gently worn shoes, given by the community, to those experiencing homelessness.

“It makes me full of joy because of the fact that I’m able to help people out,” Sobel said.

Most recently, her charity stepped up at a time people need it most. Two Los Angeles City Council members approached her when the pandemic hit and asked Sobel to collect as many shoes as possible.

She and Shoes for Souls answered the call.

Sobel got her family, volleyball team, school, and entire community involved through the Nextdoor app. Together they donating four thousand pairs of shoes directly to homeless shelters.

“I was so honored they thought of me to help. It was really great being able to see my work pay off,” Sobel said.

If you were wondering just how many miles she has walked in other people’s shoes, all 30,000 pairs she has donated lined up, one by one, would stretch about 12 miles.

Pandemic job losses are only expected to heighten the homeless crisis, and Sobel is continuing to grow her charity. She’s got one more year of high school after this one and said she will keep running the charity if she stays local or pass it down to her younger brother and sister if she goes away to school.

For now, she continues to collaborate with organizations like Shoes For The Homeless, Hav A Sole and 92.3 The Beat, dropping shoes off every two months.

“You know a fresh, new pair of shoes can really brighten someone’s day, brighten their attitude and their outlook on life. I wanted to help as many people as possible and I knew if I continued this onto my fifth year, I could help even more people,” Sobel said.

Good for the soul.