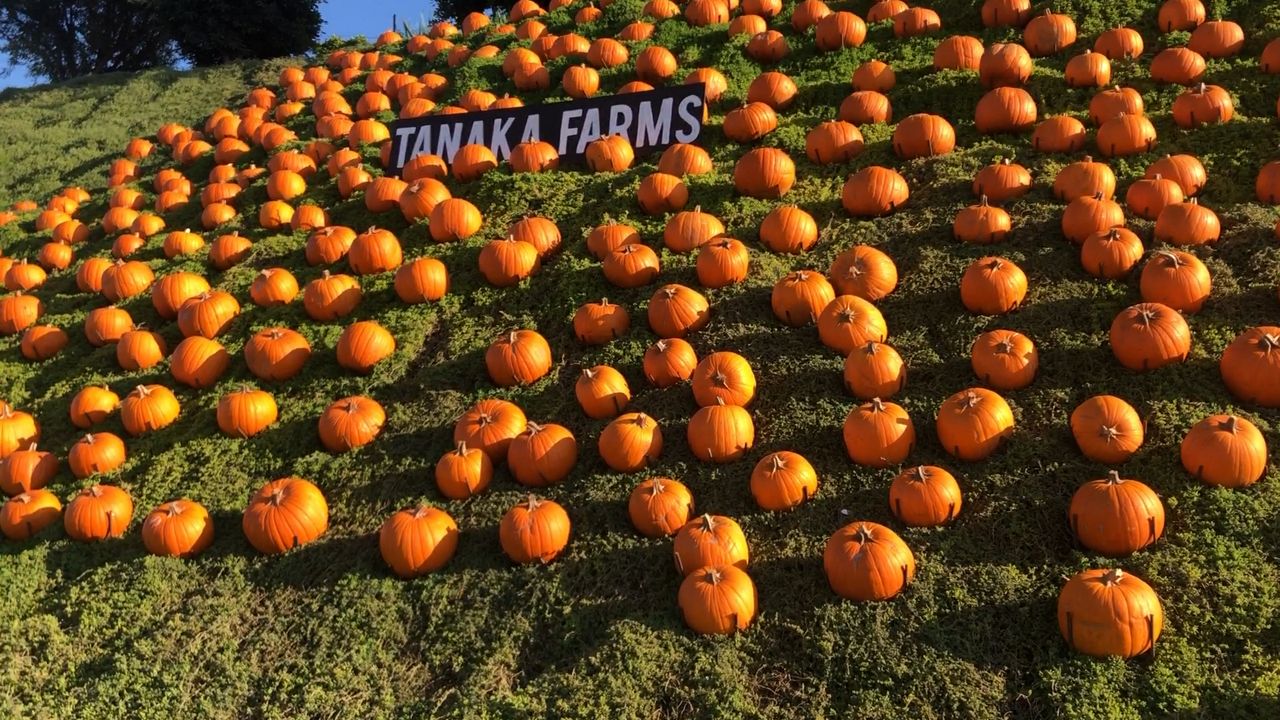 IRVINE, Calif. — It’s fall! That means it is time for all the Halloween time traditions, including pumpkin patches.

A farm in Orange County has pivoted due to the pandemic to keep the family-friendly tradition alive while keeping its guests safe.

Tanaka Farms has transformed its 30-acre farm into a pumpkin patch.

The entrance to Tanaka Farm's drive-thru pumpkin patch is, of course, a giant pumpkin. It's the beginning of a one-mile route around the farm that includes all-things-pumpkin, fun facts about farming, and things grown on the farm. Visitors are given a scavenger hunt to fill in as they go through the course.

Those who complete the scavenger hunt and turn in their sheets are in the running for prizes.

The pumpkin patch tradition is something the Carl family does every year around this time.

"We love coming. We've been coming since the kids were little," Jason Carl said.

Jason and Remy Carl's kids are now 4, 7, and 9-years-old. Halloween is 4-year-old Lincoln's favorite time of year. He confirmed that by yelling, "Yes!!!!"

His favorite part of the season is, "Dressing up!" The Carl family is serious about Halloween and have worn coordinated family costumes every year.

Lincoln also said he likes their annual visit to the pumpkin patch at Tanaka Farms. It's a visit Jason Carl said he was unsure would happen this year because of the pandemic.

"I was worried, so I was pretty excited when I heard they were going to open up this year," he said. "It's a little different but kind of fun."

What stayed the same is the farm-grown pumpkins in all shapes and sizes. Some things have changed this fall due to the pandemic, such as having a drive-thru pumpkin patch this year.

The drive-thru option is only available on weekends through October 31.

Glen Tanaka, also known as "Farmer Glen," said they surveyed customers on what they'd like to see this year at the pumpkin patch that has been going on for decades at the farm.

Tanaka said, "40 percent said they'd really want to stay in their car. The other 60 percent said they would really like to be able to get out. So, we're trying to figure out the best way to help make everyone feel safe and comfortable."

They came up with options and got to work at least one month ago to create the pumpkin patch and fall festivities. On weekdays, the farm offers socially-distanced wagon rides with reservations. The U-Pick wagon weekday option includes a pumpkin and the opportunity to pick a couple of vegetables growing on the farm.

Visitors are required to have their temperature taken and wear masks. On weekends, the drive-thru option also requires a reservation. But even in cars, customers have a choice, Tanaka said.

"At the halfway point, you do get to get out and pick your pumpkin. And you also do have the option of staying in your car and driving through and getting your pumpkin at the very end."

The Carl family opted for the get out and pick your pumpkin option. Lincoln, Addy, and Jameson each picked one out while wearing masks in the pumpkin patch.

"It's just fun to be out here, and we usually come away with a good one," Jason Carl said.

His wife, Remy, said they're able to come away with a good time while feeling safe during a pandemic.

"From the mask, to a drive-thru pumpkin tour, I mean they've really thought of everything," she said.

The farm even thought about keeping another part of the pumpkin patch tradition around during a pandemic – the animals. As guests end their drive through the farm, the exit includes a drive-thru way to see animals.

Guests can say goodbye to the animals, including Kunekune pigs, goats, mini donkeys, and alpacas, as they drive off the farm.

Farmer Kenny said while it's hard work putting the pumpkin patch together, the effort is worth it to see families with smiles on their faces.