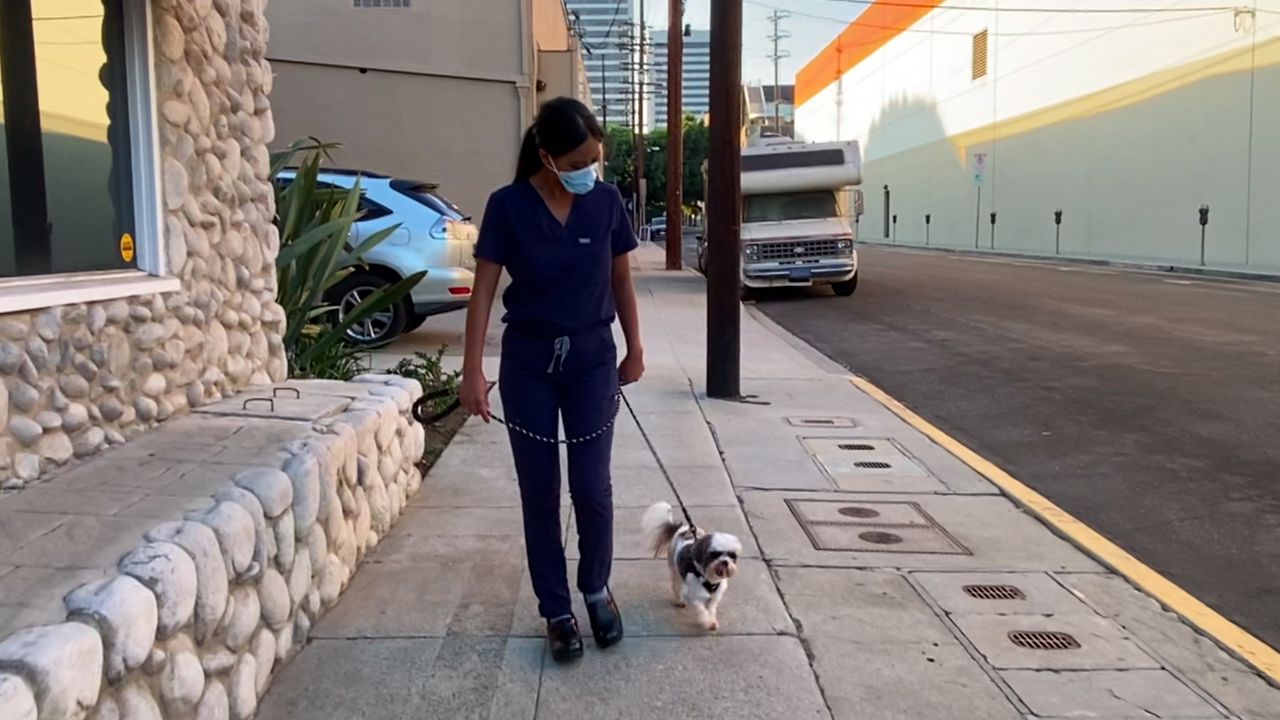 LOS ANGELES, Calif. – The pandemic demands a lot of front-line workers as many work long hours and face increased exposure to the coronavirus. For those who have pets, especially dogs, it also means worrying about who is going to take care of them while they work long hours.

For Kylie Nishida, a nurse who treats COVID-19 patients, it means leaving her Shih Tzu, Milo, at home for long stretches of time.

“He is, you know, a rescue, so he doesn’t so do well by himself,” Nishida said. “He always needs some company, some love.”

The pandemic has kept Nishida busy as she’s doubled her hours, working 12 hours for five or six days a week. In the past, her roommate would watch Milo but then she moved and her new roommate can’t do the same. She took to Yelp and found a doggy day care facility called Puparazzi L.A.

We are offering FREE Dog Boarding to all frontline healthcare workers as well as all first responders in Los Angeles ... giving back to our community is so important to us. Take a look at one of our #dogboarding suites today - If you have more than one pup we have the perfect place for your #dogfamily Dog Hotel Luxe Suites: Our opulent Los Angeles dog hotel Luxe Suites feature capacious accommodations, private cabinets for storage of personal belongings, and fresh linens daily while they stay with us. Four 48-square-foot suites all named after some of our favorite musicians. Each Luxe Suite can accommodate up to 3 dogs from a single household depending on the size of the dogs. The Luxe Suites allow plenty of room for your precious pooch! Watch your dog snoozing from our Puppy Peek Cams. At Puparazzi, we believe in privacy for our guests, so to watch your dogs sleep while they stay with us, you receive private access to one of our Puppy Peek Cams with a personal login. Book now and have your dogs vacation in either the Natalie Borkman Suite, the Bill Furry Suite, the Will Sniff Suite, or the Brad Pitt-Bull Suite. . . . . #dogsleepover #doglife #petlife #petlifeisgood #doglifeisgood #petowners #dogowners #happypups #welovedogs ##healthcareworkers #medicalworkers #lafd #lapd #lasd #community #losangeles #welovela #puparazzila #dogresort #dogspa #doghotel

Puparazzi L.A. opened four months before the pandemic when co-founder Lusine Abikzer wanted to create a place where dogs can be treated like celebrities. But as more people work from home these days, she hasn’t seen as many dogs come through the doors. Instead of letting boarding rooms sit empty, Abikzer wants to give back to nurses, firefighters, police officers – all front-line workers and their canines.

“They have been working and literally risking their lives to be at the front lines to be able to take care of people who have COVID and who are affected by COVID,” Abikzer said. “And it occurred to us that their dogs are literally being affected by this at home. These long-hour shifts are keeping their dogs alone at home.”

With boarding rooms named 'Marilyn Monruff' and 'Leonardo Diwagglio,' the daycare facility is made for the stars. Pups spend the day in the lap of luxury in private rooms, spa services and three large exercise areas. Abikzer says they offer contactless drop off and workers can bring their pups for as long as they need.

“If they are working late shifts, they don’t have to worry about picking their dogs back up because it’s complimentary. They can leave their dogs until they are ready to come back and pick them up,” she said.

It’s a service Nishida has been using since August. “The relief to find a place who has been really awesome toward me and Milo has been a huge relief off my shoulders,” she said. “I’m able to put in more hours at work knowing that he’s safe and having a lot of fun.”

The free dog boarding for front-line workers runs until the end of the year.