A backyard pool in Aliso Viejo, available for rent on Swimply. (Photo courtesy of Swimply)

Can't Find a Pool This Summer? Try Renting One From a Stranger

VALLEY VILLAGE, Calif. — When Steve and Hedy Katz bought their home in Valley Village last fall, one of the main selling points was its pool. But there’s only so much time a couple can spend swimming around in their own backyard, so the Katzes started renting it out on an app called Swimply.

Think of it like Airbnb, only for swimming pools. For about $50 an hour, strangers can book and use another person’s private pool, which, for the Katz property, includes an attached spa, barbecue, bar, shaded seating, a private entrance, and complete privacy from the main house.

“We don’t use the pool all the time. It sits there. It was a no brainer for us to try it,” said Katz, who signed up with Swimply in March and now makes about $1,000 per month renting his pool to people he doesn't know. Over the Fourth of July weekend, the Katzes had three reservations on a single day, including a couple, a pair of families with kids, and a small group celebrating a 21st birthday party.

The Katz pool is one of about 325 private pools listed on Swimply in Southern California. Statewide, the app has about 650 pools, but that number is growing daily, with new listings in Granada Hills, Murrieta, Burbank, and other SoCal homes in a single day last week. The L.A. area is its biggest market.

“They’re finding us,” said Swimply co-founder Asher Weinberger. “All of it is word of mouth. We’ve done no marketing.”

Swimply was born out of a problem Weinberger was personally experiencing after he bought a house with a pool in Long Island three years ago and was flooded with requests from “every friend, neighbor, and family member reaching out to use it. I wanted a scheduling app. I just didn’t want to deal with all the reach outs,” he said.

And then he met Bunim Laskin, a 21-year-old from New Jersey. The oldest of 11 children, he was looking for a way to get his siblings out of his parents’ hair and noticed out of his bedroom window that an elderly neighbor had a pool that was almost always empty. So he knocked on her door and offered to pay her a couple hundred dollars a week for a few hours of pool time each day. It wasn’t long before word got out, and the entire neighborhood had cut the same deal.

The two decided to start a business together. They found four more pools in Laskin’s neighborhood and signed them up for rentals. Then they built a website, raised $1.2 million, and built an app that officially launched last summer and is now used throughout the country, as well as in Canada and Australia. Swimply makes its money by taking a 15 percent fee from the host and charging swimmers a 10 percent fee. 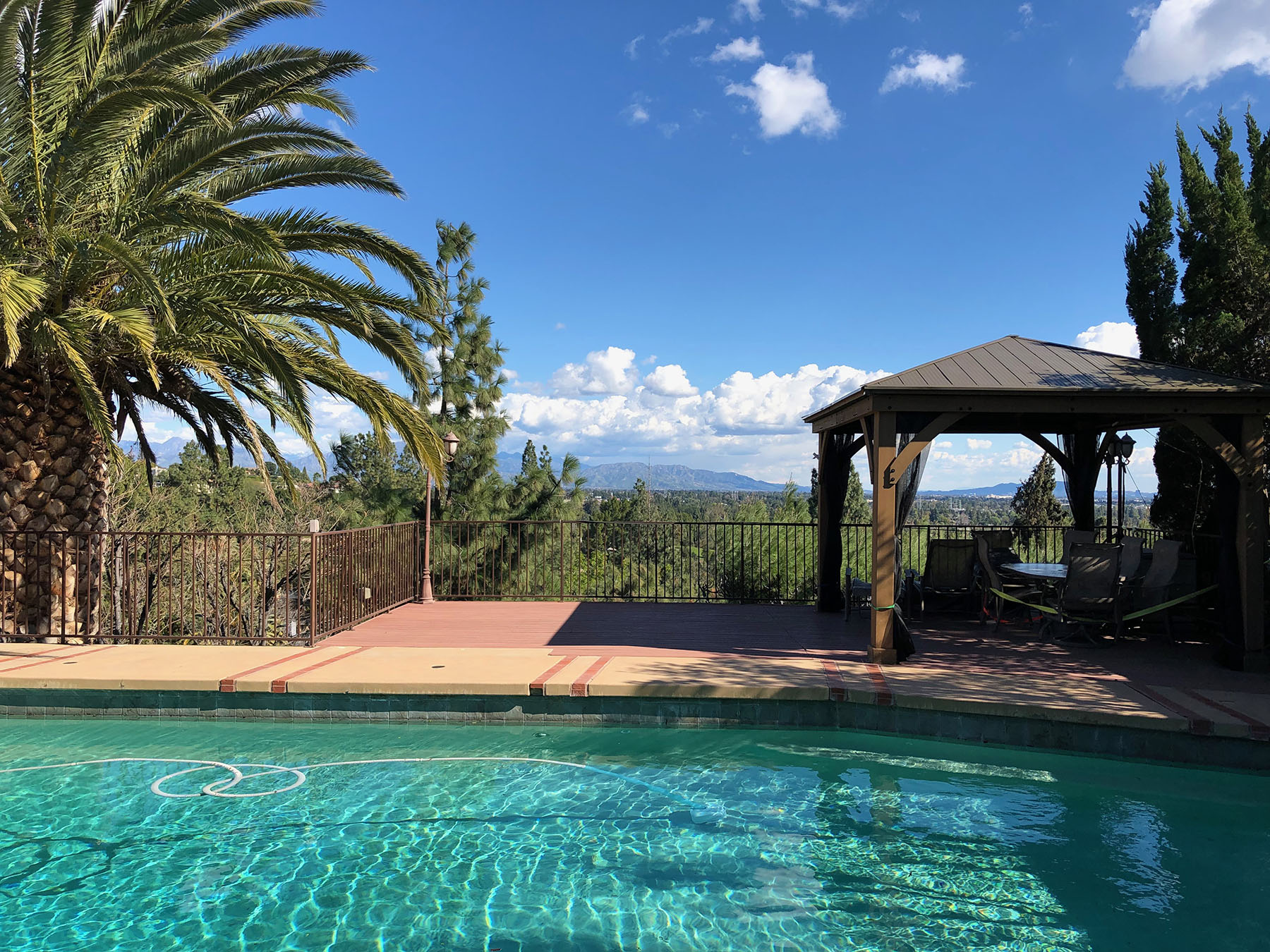 “We’re growing crazy fast,” said Weinberger, adding that COVID is driving demand. “There’s a shift taking place away from public domains to private domains and away from travel to local,” he said. “You go down the block to the pool. You don’t fly on a plane.”

The pool down the block for a lot of Angelenos used to mean a city- or county-run pool, but this summer all of the aquatic facilities in Los Angeles City and County are closed due to COVID, as are many popular privately-run pools, including the Rose Bowl Aquatic Center in Pasadena and Annenberg Community Beach House in Santa Monica.

Swimply isn’t the only way to rent a pool this summer. Airbnb says pools are the most searched amenity right now for its overnight home rentals. And other peer-to-peer rental companies, such as Peerspace and Giggster, also rent spaces with private pools, though their rentals are geared toward commercial engagements such as photo shoots and business meetings and tend to come with a higher per-hour price tag and minimum rental time.

Steve Katz said he’s been approached by Peerpace, “but we don’t want 20, 30 people rummaging through the yard, making noise and bothering the neighbors,” he said. Bookings at his place are restricted to a maximum of 10. “Swimply seems to draw smaller family or close-knit friends."

Most are just average people looking to get away for a while and relax, he said, "but recently we have been receiving bookings for the jacuzzi in the evening for a couple of hours as a date night."

In the future, Swimply plans to build out its app with something called Joyspace so people can rent not just pools but hot tubs, tennis courts, barbecues – even home gyms, home theaters, backyard decks, barns, and private lakes.