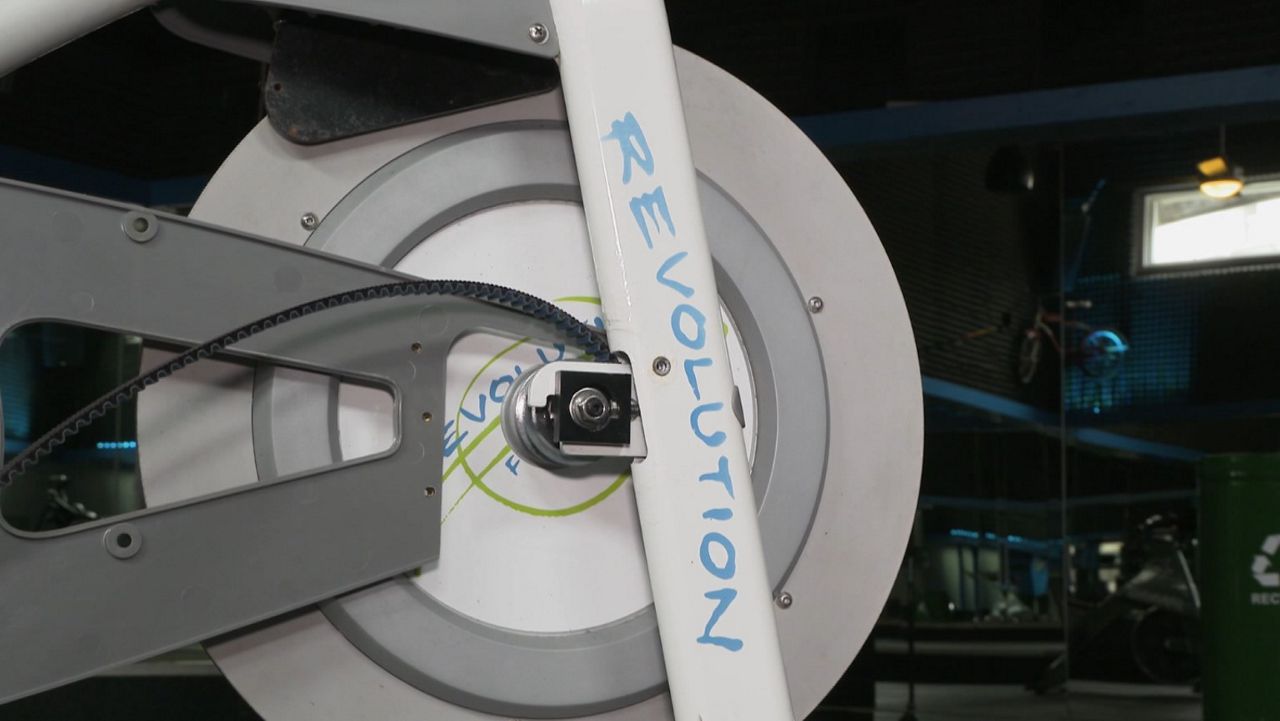 SANTA MONICA, Calif. – Many small businesses are struggling to stay afloat during the coronavirus shutdown but as restrictions loosen, not all shops will see customers again. Revolution Fitness is among them.

“We were completely shut down one day and that was it,” said Moore. “And now the opening is…it’s so uncertain.”

Revolution Fitness’ main draw was spin classes, packed tight with riders. Moore worries they are a thing of the past.

It's an energy Moore began harnessing 24 years ago when she opened on Santa Monica’s popular Montana Avenue shopping district.

Moore started off with a handful of bikes.

“We started with 13 bikes. Twelve bikes in here and a teacher bike. Within three months, I went to 18 bikes,” she said. “Within six months, I went to 24 bikes. By the end of the year, I had 36 bikes and I thought I could not fit any more bikes.”

At one point, she squeezed 60 bikes into the studio’s main room as clients flocked to classes and it wasn’t just for the exercise.

“It was much more than the spinning. It was absolutely the community and getting fit was just the byproduct,” said Moore.

A community that raised $15,000 in a donation-based spin class to fight breast cancer two years after she opened her studio in 1996. Moore got the idea for the fundraiser after she discovered her mom, who is alive today, was diagnosed with stage 4 breast cancer.

“The generosity of the clients here was beyond,” said Moore. “But it was the energy and how excited people were to do something good for themselves and for other people.”

“I would say a huge percentage of the members have been with me 15 plus years,” said Moore. “So it's kind of a place, people would come and go to...or people would move away and come back.”

But clients won’t be coming back because Moore doesn’t plan to reopen.

“It was really hard to figure out financially how I was going to make it work with the instructors with a quarter of the amount of people in here...or half eventually,” said Moore.

The hardest part was breaking the news to her clients. They sent hundreds of messages.

“It was devastating to read some of their letters, you know, and sometimes I wish I read those letters before because you don't really realize how much you've impacted people,” said Moore.

Mike Monk, who discovered the studio 20 years ago, says he can’t duplicate his experience at Revolution Fitness.

“I just felt welcomed there. Revolution...it had the young hard bodies. It had the middle-aged fitness gurus but then it had the older folk like myself and I never felt like I wasn't completely welcome,” said Monk.

He’s not the only one. Lauren Nguyen signed up with Revolution Fitness when it first opened.

“I always expected it to be there,” said Nguyen. “It's like one of those things that you take for granted and so yeah, it was a shock. I'm getting little goosebumps just thinking about it now.”

For Moore, knowing that she touched the lives of so many for so long is comforting as she turns the final page on this chapter.

“Just being able to do something that makes a difference in people's lives,” she said. “Knowing that what I'm doing matters.”

Making it less painful to say goodbye to her business for good. But there is a bright spot on the horizon for Moore, who is focusing on her passion for animals.

She plans to transform the studio space into a doggy daycare. Moore says she’ll even get to keep part of the studio’s sign because she plans to call the new business “The Canine Revolution.”