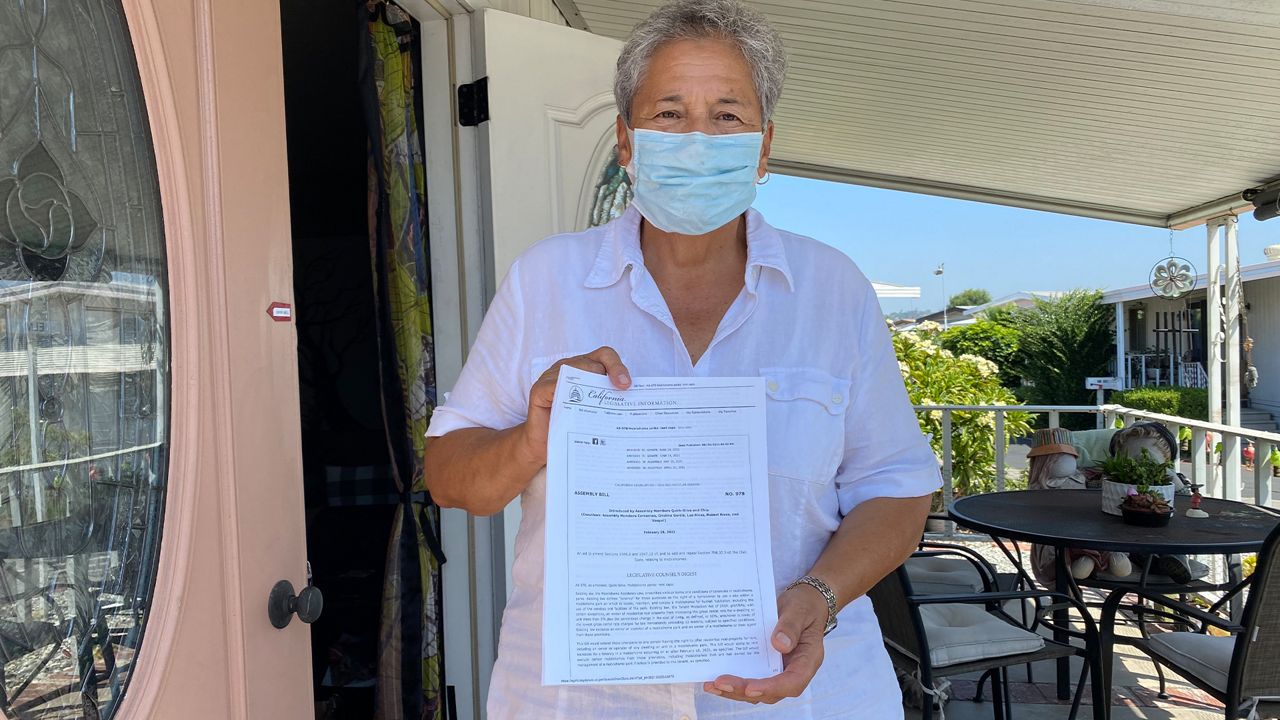 ANAHEIM, Calif. — California Assembly Bill No. 978 took two years of Lupe Ramirez’s life, but it was a risk she was willing take to keep her home.

“I couldn’t give up because I just felt like some place, somebody has to be hearing that this just isn’t right,” said Ramirez.

Spectrum News 1 first interviewed Ramirez, a grandmother and a retired school bus driver, in 2019 when she got a letter from a new company that purchased Rancho La Paz, a mobile home park she had been living in for years. It wanted to increase rent by the hundreds for more than 600 residents, who like Ramirez, are retired seniors living on fixed incomes.

“We started a food pantry here and we fed 56 residents a week because after they paid the increases in the rent, they couldn’t afford food anymore,” said Ramirez.

On July 23, Gov. Gavin Newsom signed Assembly Bill No. 978 into law. It will prevent mobile home companies from price gouging parks that are located within and governed by two or more incorporated cities.

The only mobile home park in the state that fits that criteria under the law is Rancho La Paz Mobile Home Park which straddles Fullerton and Anaheim. Ramirez and her neighbor Roger Brannen live on the Anaheim side.

“Like a lot of people, I just basically thought, 'Oh wow, this is unbelievable. I’m going to have to sell and go because I didn’t have that background to say this was unacceptable.' She did,” said Brannen, a longtime resident of Rancho La Paz Mobile Home Park.

For two years, Ramirez and her neighbors including Brannen, protested, rallied and spoke to elected officials at all levels to push for rent control. Brannen says he continued to fight for this bill by writing letters and emails even after he got a blood clot and couldn’t leave his house.

“We just had to keep going and we couldn’t say, 'Geez, it’s too much effort. We’re going to quit,'” said Brannen.

This bill would, until January 1, 2030, prohibit the management of a qualified mobile home park, as defined, from increasing the gross rental rate for a tenancy for a mobile home space more than 3% plus the percentage change in the cost of living, as defined, or 5%, whichever is lower, of the lowest gross rental rate charged at any time during the immediately preceding 12 months, as specified.

“It’s a lot of pages, but it’s here. It’s done,” said Ramirez as she held up a print-out of the bill.

While it took a lot of hard work and luck to protect the park, Ramirez hopes their fight will inspire other senior communities living in mobile home parks across the country to fight for their homes. Ramirez also wants to thank Assemblymembers Sharon Quirk-Silva and David Chiu for sponsoring the bill.

You can read the bill here.