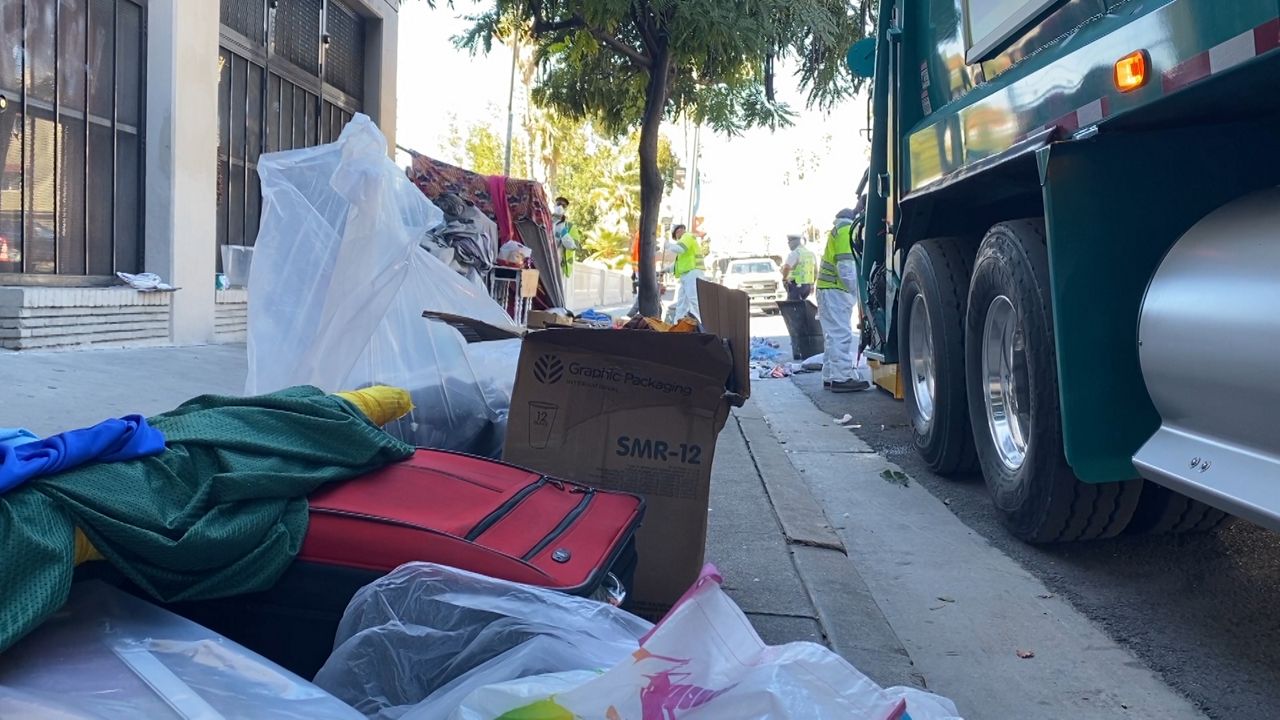 LA has no more hotel rooms for homeless amid omicron surge

CORRECTION: An earlier version of this story had the incorrect number of unhoused who had tested positive for COVID-19 during the week of Jan. 3. The error has been corrected. (Jan. 17, 2022)

LOS ANGELES — COVID-19 infections among people experiencing homelessness in Los Angeles County have hit record numbers, according to data from the Department of Public Health.

During the week of Jan. 3, 918 people experiencing homelessness tested positive for COVID-19. That brings the total number of infections during the pandemic to 11,738 with 273 confirmed deaths from the virus.


Mayor Eric Garcetti’s office said he supports pausing enforcement of the city’s new anti-camping ordinance, but the decision is ultimately up to individual councilmembers in their respective districts. A spokesman said the city only had congregate beds available, and that hotel rooms with the FEMA-funded Project Roomkey were filled.

If individual housing options are not available, people living unsheltered should remain where they are, according to recommendations by the Centers for Disease Control and Prevention.

The CDC says clearing encampments can cause people to disperse, increasing the potential for disease spread, and break connections with service providers.

The city’s comprehensive CARE+ cleanups continued anyway this past week, with sanitation teams clearing out bulking items and trashing tents that have proliferated during the pandemic.

“They’re only giving me 20 minutes, so I’ve got to roll,” a man known on Sunset Boulevard as "Eddie Spaghetti" told Spectrum News 1.

With the clock ticking down, the man was frantically looking for money he’d hidden deep inside the silk canopy he set up during the pandemic. He said this was the first comprehensive cleanup he’d had from the city in the two years since he set up camp.

LA Sanitation ultimately helped the man move a few suitcases before throwing away the rest of his belongings.

On Friday, the county’s annual count of the homeless population was postponed for a month by the Los Angeles Homeless Services Authority because of the surging case numbers. The count will take place over three nights beginning Feb. 22. The count determines federal funding to address the crisis.


Jane Nguyen, an advocate and organizer with Ktown for All, said she worries councilmembers are under pressure to make their numbers look good, even as infections spread in encampments. Nguyen noted that comprehensive cleanups and enforcement could send the homeless into neighboring districts.

“The sweeps are controlled by council offices,” she said.

A few days after the Sunset Blvd cleanup, Eddie Spaghetti was still there, camping in the tent given to him by LA Sanitation. Nguyen said the area now bans camping under LA Municipal Code 41.18, a new city law that allows councilmembers to prohibit sleeping and sitting in certain areas — as long as they provide outreach ahead of enforcement.

Councilmember Mitch O'Farrell said that whether the homeless can stay is now up to the LAPD.

"While 41.18 signage has been posted at certain sites and can now be enforced, this responsibility lies with the Los Angeles Police Department," he said. "Each of these sites has been the focus of regular outreach and education about compliance. This is in addition to our ongoing work with the UHRC to vaccinate unhoused Angelenos living at our temporary shelters and on the streets."