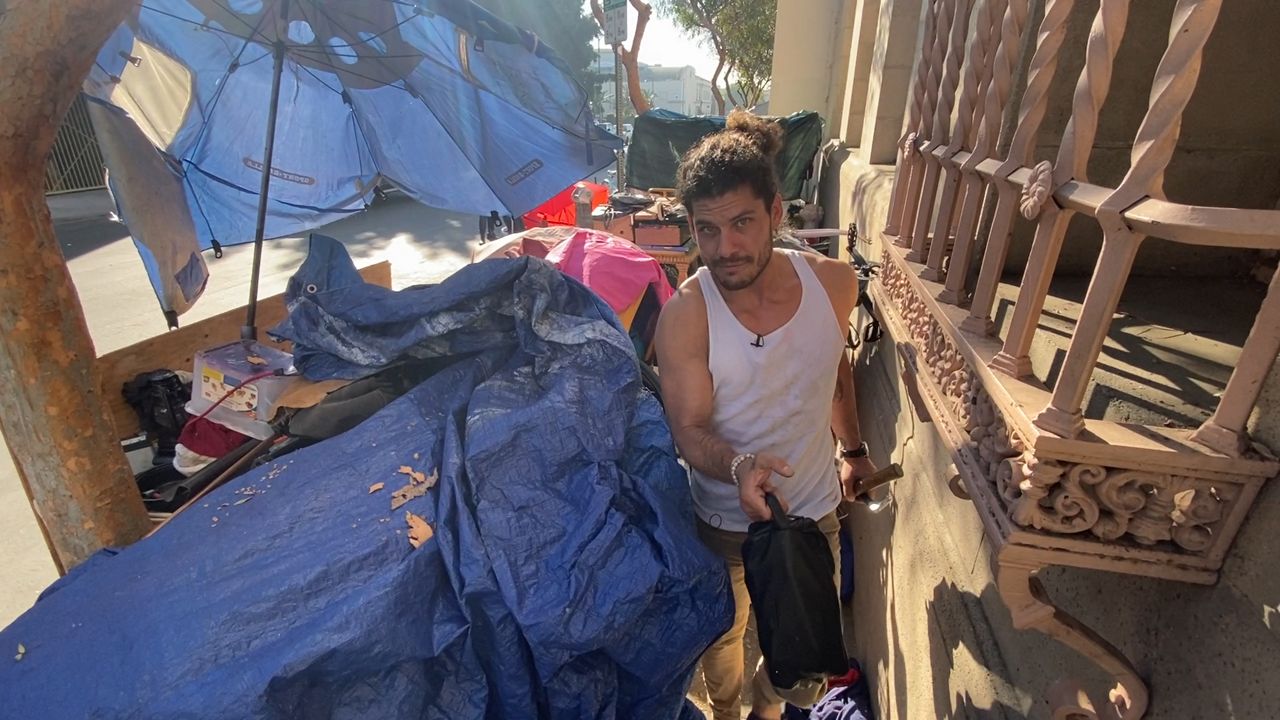 James Melgar, who lives outside the “A Bridge Home” homeless shelter in Hollywood, is hopping to get off the streets. (Spectrum News/Kate Cagle)

LOS ANGELES — If it has gears and wheels, James Melgar probably knows how to fix it and while he works out of a tent rather than a repair shop, enough people have heard of his work that customers seek him out.

“Everything here you see, I built myself,” Melgar said showing off his work space right outside the Hollywood “A Bridge Home” shelter on Schrader Boulevard. Mayor Eric Garcetti opened the shelter in 2019, acknowledging at the time it only had space for about a third of the homeless living in the area.

Nonetheless, city officials promised the shelter would translate into cleaner sidewalks by moving the encampment indoors while participants waited to transition into permanent affordable housing.

The program’s website still says, “The City is committed to making sure that the streets surrounding new A Bridge Home shelters stay safe and clean…establishing special enforcement zones to ensure that tents are taken down.”

However, two years later, the encampment has grown, becoming home to new faces, including Melgar, who slid into homelessness about a year ago.

“[I’m] making the best of a bad situation,” Melgar said.

The mayor’s office did not respond to questions from Spectrum News 1 about the program or the state of the sidewalks around the shelter, but a recent press release said A Bridge Home has sheltered about 4,000 people since launching shelters across the city. Of that group, 650 have moved into permanent housing, according to the Los Angeles Homeless Services Authority, and fifty were from the Hollywood shelter.

It’s not clear if that number includes people like Melgar, who moved from the shelter into an apartment with his girlfriend when she got into affordable housing, but ended up back on the street when they broke up.

“I thought maybe because I was in [the program] before it might help me get back in but, no, I’ve got to start the whole thing over again,” Melgar said.

Last Wednesday, Melgar was waiting by his tent to see if the sidewalk would receive its scheduled weekly cleanup. While sanitation never showed, a LAHSA employee did — hand delivering him a newly-issued government ID.

It’s the first step for Melgar getting off the street again.