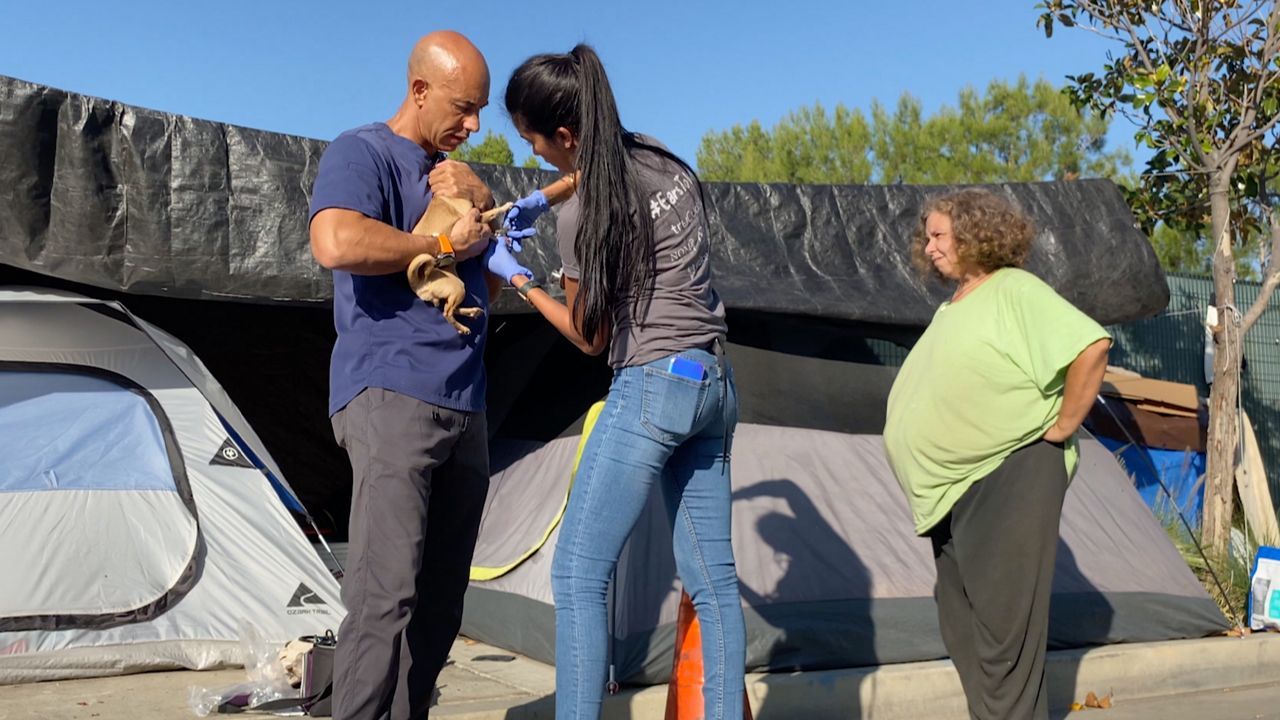 LOS ANGELES — Dogs are man's best friend, and nowhere is that more evident than on the streets of Los Angeles.

Over the last two years, Tanya Myers has been living on the streets of the San Fernando Valley with her son, husband and seven dogs.

"They are our companions. They help us a lot, specially when we get depressed over our situation. Doesn't seem like anything is going to change," Myers said.

The family of chihuahuas is her therapy, her protectors, her unconditional non-judgmental sparks of joy.

So when veterinarian Dr. Kwane Stewart and veterinary nurse Genesis Rendón came by offering free services, Myers was thankful she could get her youngest pup vaccinated.

Stewart, who has a practice, started volunteering on the streets 10 years ago after his work at a county shelter left him scarred.

"It was the hardest work I've ever done in my career. We unfortunately were euthanizing a lot of pets every day," Stewart said. "Some days, some mornings by 10 a.m., me and my team were doing 40, 50 euthanasias. A lot of them healthy dogs."

Eventually, his nurse Genesis Rendón joined in his efforts. They provide pets with vaccines, flea and tick meds and food—all free of charge.

"This will surprise a lot of people. More times than not, they are remarkable owners. They sacrifice a lot for their pet, probably feed their pet before they feed themselves, will stay out of temporary housing if their pet isn't allowed in with them," Stewart said. A few tents down from Myers, Wayne Giannino lives with his dog.

Reports indicate that anywhere between 10% and 20% of homeless folks in LA have pets.

“This will surprise a lot of people. More times than not, they are remarkable owners. They sacrifice a lot for their pet, probably feed their pet before they feed themselves, will stay out of temporary housing if their pet isn’t allowed in with them,” said Stewart.

Giannino said he was kicked out of a shelter when his dog bit a guard, and that's part of the reason he is still on the street.

"I would probably take a hit by a car before I let him take it, I would push him out of the way," Giannino said.

Stewart said there has been an increase in shelters and housing options that accept pets, but the need still far outweighs the resources.

"The work is always here unfortunately, I wish I could be put out of a job, but that's not going to happen anytime soon and until it is, I'll keep burning up my shoes," he said.