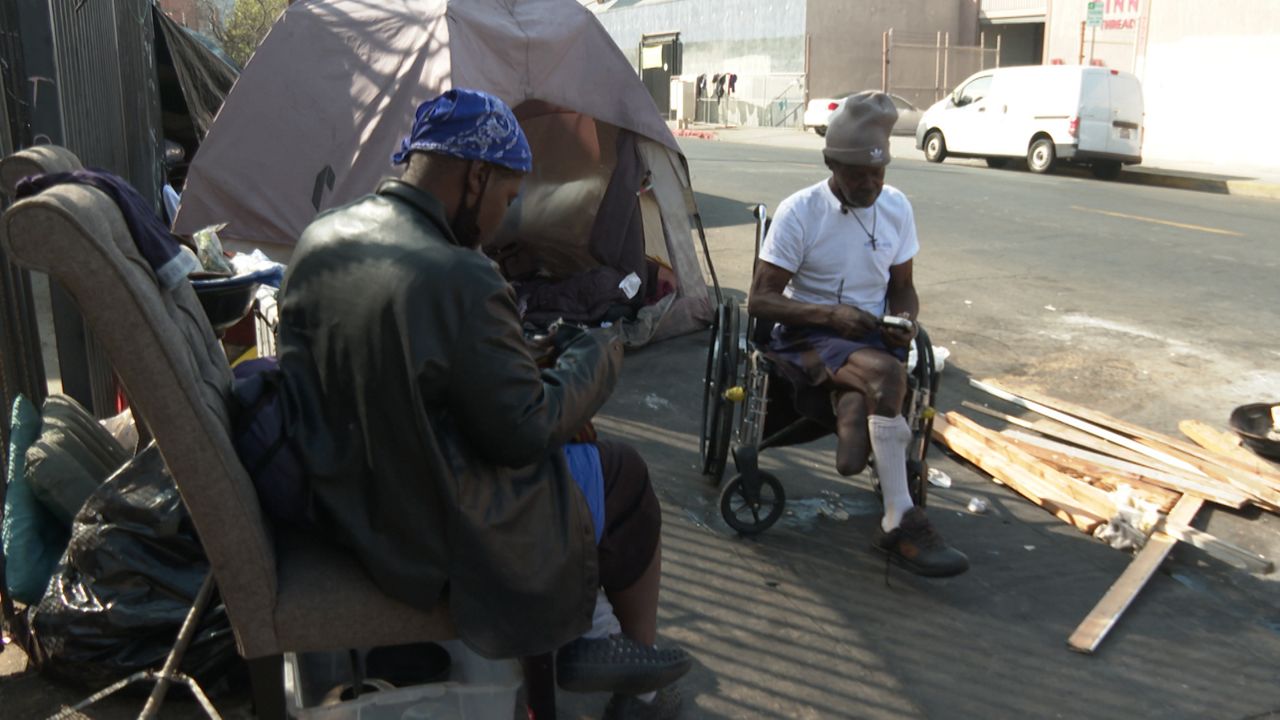 LOS ANGELES — While activists and Los Angeles County Sheriff Alex Villanueva clashed at a town hall Tuesday, a few blocks away a 64-year-old man known as “Gutter” was making the best out of life near Skid Row.


“You know what? Home is where you make it,” Gutter said outside his tent on a sparsely populated stretch of sidewalk.

After years living in the heart of Los Angeles’ sprawling homeless crisis, Gutter now has a tent on a relatively quiet street, friends and a case worker known as Soma Snakeoil, who is helping him get into housing.

“If you just gave me a place to myself with all the necessities I need, I’d probably be okay,” Gutter said.

As a former homeless drug user and sex worker, Snakeoil said she understands the challenges facing those wishing to move off Skid Row.

She launched her organization The Sidewalk Project to empower homeless communities.

She said the biggest barrier to getting people off Los Angeles streets is a lack of affordable housing.

“Every time I go outside, people say 'can you get me housing?' People want to have their own space,” Snakeoil said.

On Tuesday, Villanueva came to Skid Row to meet with the local Business Improvement District, who asked him to bring his high-profile pivot to the homeless crisis to the 90-year-old quagmire known as Skid Row.

“Are we going to double down on the same failed strategies of the past?” Villanueva asked the crowd after six activists from the Los Angeles Community Action Network and the People’s City Council were escorted out for disrupting his speech. “No, that’s the definition of insanity.”

The head LASD’s Homeless Outreach Service Team, or HOST, Lt. Geoff Deedrick, assured the crowd they are not coming to make arrests. The team consists of 26 deputies who exclusively work in encampments.

“We do not criminalize homelessness. It’s the exact opposite. We have accomplished our mission for the last five years…without making an arrest,” Deedrick said.

Deedrick said his team instills a sense of security so caseworkers like Snakeoil can do their jobs, and he hoped she would spend time with them on the street.

However, the presence of the HOST team will not expand the housing options available for those living on Skid Row, and Snakeoil said the presence of deputies threatens her clients.

“To involve police in harm reduction and housing and providing care for people we believe is problematic because police are not care providers,” Snakeoil said. “In our experience, police put [up] barriers for care and we see this on a regular basis.”

Back outside the town hall, Gutter said whether it is a case worker or a deputy, his problem will likely remain — there’s nowhere else for him to live.

“Where are they going to put us, in jail?”

He has heard promises before to clean up Skid Row. After all, if he is still here next year it will mark four decades on the street.