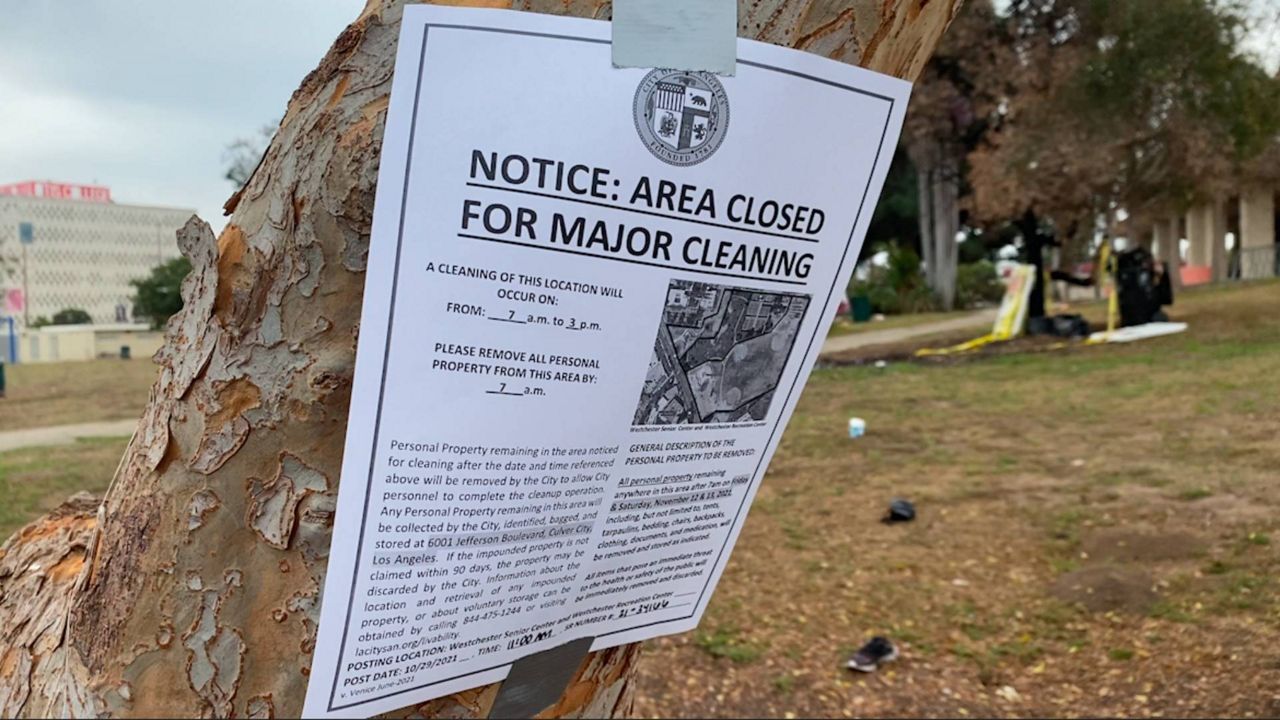 Homeless Westchester Park residents moved into motels ahead of cleanup

LOS ANGELES — Oscar Barr has spent most of his life as a mechanic fixing cars. Now, his car is essentially all Barr has to his name.

Barr lost the home his mother left behind after she passed away three years ago. Since then, he’s been homeless and living out of his Honda Accord in Westchester Park. Barr survives as best as he can living off of the $1,100 per month he gets from social security, but with his health deteriorating, he doesn’t know how much longer he can sleep in his car.

"We learned a lot with the success we saw in Venice,'' said Bonin. "When you work with people and focus on creating suitable alternatives to encampments, then people come inside, and everyone wins. Housing people and providing the support and services they need is the most urgent priority in Los Angeles and we owe it to every neighbor in Los Angeles to build upon the achievements we have made with encampments to homes efforts so far.''

PATH senior director Haley Fuselier helped Rodney Higginson check into his own motel room on Monday. Higginson had been on the streets all year, living in Westchester Park the last three months.

"It feels good to be in somewhere settled where I can shower and have a place to sleep on the regular," he said.

On Nov. 12 and 13, the city is closing the front and back portions of Westchester Park for cleaning, and the people who live there will have to vacate and take all of their personal belongings.

Bonin's office and PATH hope to get them all in motels by that date. In just a week, Fuselier says PATH helped over one-third of the homeless population in the park move into temporary motel rooms on person-by-person reservations. At last count, there were approximately 70 unhoused residents in the park, and by Monday PATH temporarily housed 31 in motels.

Once checked into the motel, people are able to stay there as PATH works to secure permanent housing, which in some cases may take as long as 90 to 120 days.

“It does depend on apartments and landlords willing to rent to [PATH],” Fuselier said. “Luckily, we have a program called Lease Up and they have a list of landlords willing and ready to lease to our participants.”

PATH and Bonin’s office are also working with Grassroots Neighbors, an all-volunteer community based organization based in Playa Del Rey. This group focuses on building relationships with the unhoused in Westchester Park and work as another pair of hands, eyes and ears to identify where barriers of housing lies. Grassroots Neighbors then partners with Bonin’s office to come up with solutions.


Stephanie Popescu, a Grassroots Neighbors member, noted that PATH has done an excellent job in getting people housed in motels.

"It speaks to how badly people who have been living [in Westchester Park] have been wanting housing," she said.

Popescu added that many of the unhoused residents are asking when is their turn. PATH has about 70 total rooms available at motels and hotels.

Barr is hoping he is next and became overwhelmed with emotions when he spoke about what stability means to him.

“It'’s everything to have a place to live," he said.

Although PATH outreach members are familiar with almost every unhoused resident who lives in Westchester Park, to be eligible for a motel, people must have some form of identification which is required for checking in to the room.

Fuselier said that when an unhoused resident doesn't have an I.D., that may prolong or complicate the housing process.