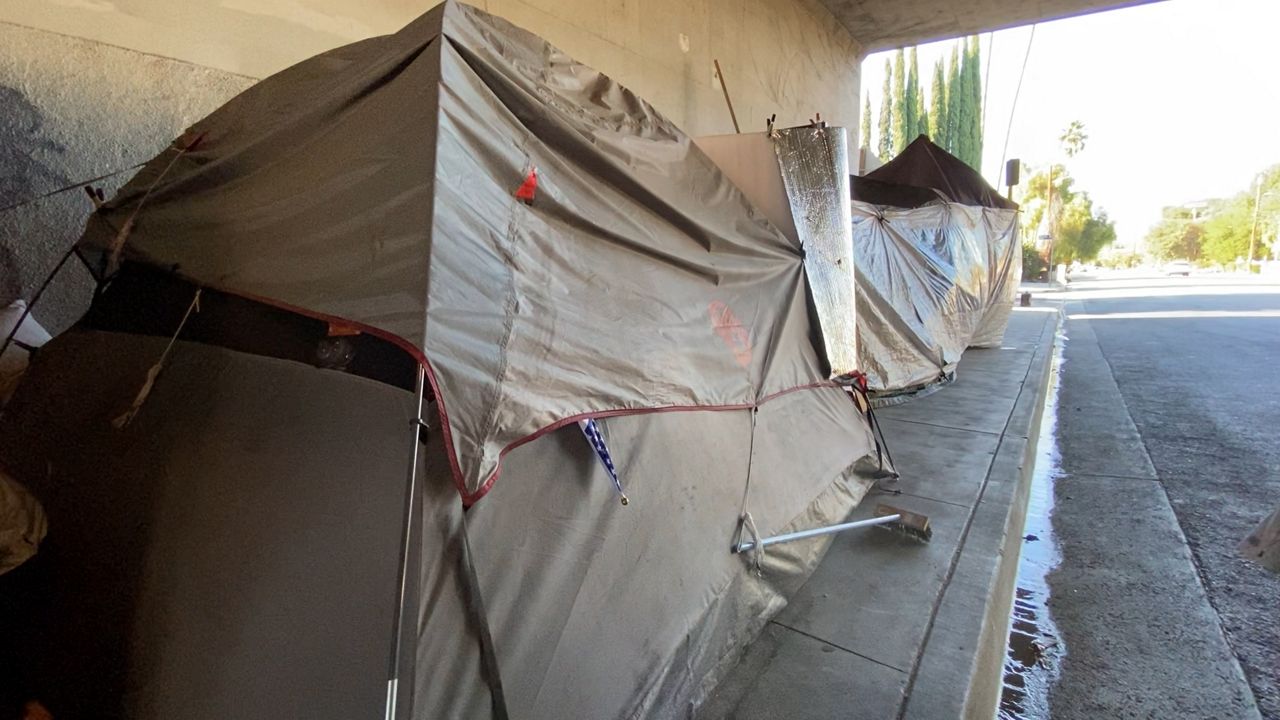 WEST VALLEY — Each Saturday, Pastor Kathy Huck and her team of outreach workers head out to provide grocery bags of food and water to those who are unhoused throughout the West Valley. Recently, her team has paired off to handle the increase in encampments in the area.

“You’re seeing more people because of the pandemic. People are out of work, people have lost their homes, people can’t scrape together enough for a down payment,” Huck said.

Huck is the president of About My Father’s Business Homeless Outreach Ministry. Over the last couple of years, Huck’s outreach efforts have ballooned from 10 encampments in Chatsworth to now 60 throughout the West Valley. Huck believes that the growing number of unhoused in the area has also led to about 10 deaths that she knows of this year and an increase in violence.

“I have, this year, seen probably about three or four situations within the encampments. And also, you know, as always, we see a lot of deaths due to exposure. Whether it’s heat, or whether it’s cold. And then, we’ve seen a lot of people, this year for me, who are elderly,” Huck said.

Recent data obtained from the Los Angeles County Medical Examiner-Coroner show there were 1,043 unhoused deaths from January to August of this year. More than 140 people died living outside in August alone. As Huck continued on her route, she found some encampments cleared out and others expanding.

“Oh wow. This is growing,” Huck said as she parked near a Woodland Hills encampment with tents and RVs.

As Huck began to distribute bags to hand out, she met with Robert Esparza, who has been living in the encampment for the last two months. He’s been unhoused for the last year and shared that he has witnessed at least one dozen fentanyl overdoses and two deaths.

“Either just pure fentanyl or heroin laced with fentanyl was causing people to lose consciousness, to stop breathing and for some their heart stopped beating,” Esparza said.

According to the latest Los Angeles County Department of Public Health Homeless Mortality report, the leading causes of death from 2017 to mid 2020 were related to unintentional drug/alcohol overdoses and coronary heart disease. Esparza shared that he has been addicted to opiates himself. But the amount of pain he’s seen on the streets has been difficult.

That’s why Huck and her team are making their way to different encampments hoping to connect the unhoused with resources. Recently, the city of Los Angeles adopted a citywide street engagement strategy that would allow outreach workers to make first contact and offer housing placements when available to unhoused in designated public spaces before enforcement occurs.

“We have to admit there’s not enough beds. So we have to find a place where we can have people camp safely. And under the underpass is not it,” Huck said.

Until then, Huck and her team will continue their work with boots on the ground in hopes of helping as many people as she can get off these streets.