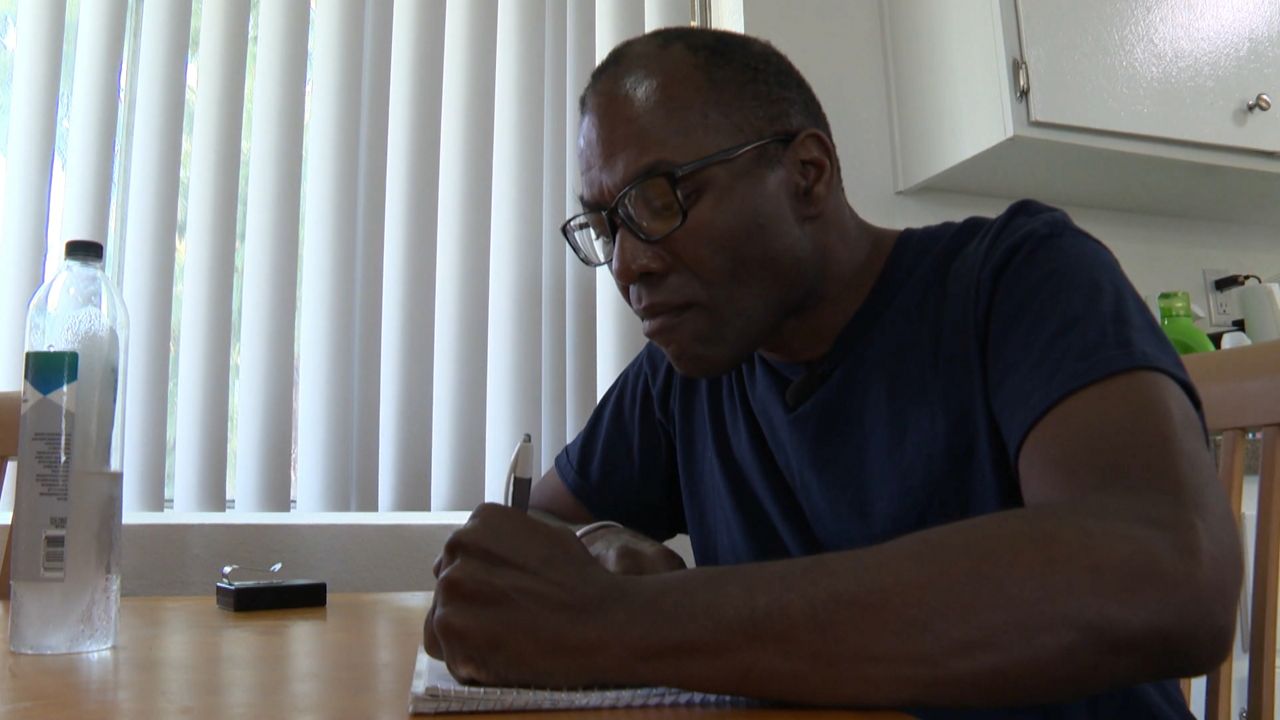 Jason Mercado, who used to be homeless, joined the Housing Champions Advocacy Network to help the unhoused.

ANAHEIM, Calif. — This key is unlocking a passion Jason Mercado didn’t know he had.

He moved into an apartment unit in Anaheim two months ago after experiencing homelessness for over a year. Mercado said he lost his job as cook and struggled to find another one during the COVID-19 pandemic.

“It takes a toll on you mentally," said Mercado. "You think you might have a place to sleep, but the police come or somebody steals your stuff. Anything can happen."

He got his apartment thanks to WelcomeHome OC, an Orange County United Way Program, aimed at creating more permanent supportive housing options.

Instead of forgetting the generosity he received and determined to pay it forward, Mercado joined the organization’s Housing Champions Advocacy Network which will encourage him to speak and write to the Anaheim City Council.

“This is a product from someone who took that training, who took a chance on me and helped me,” said Mercado.

Becks Heyhoe is the executive director of United to End Homelessness with Orange County United Way and an advocate helping end the marginalization of communities facing homelessness and housing insecurity. She is leading the Housing Champions Advocacy Network which has trained about 170 people like Mercado to be a voice for more affordable housing and permanent supportive housing developments at city council and planning commission meetings.

“This really does matter to elected officials," said Heyhoe. "They want to hear from people that live in the community that they represent.”

A key component of United to End Homelessness is the Housing Champions Advocacy Network program, which is a network of advocates who fight for affordable and permanent supportive homes to reduce the negative impact of homelessness on public health, law enforcement, emergency services and taxpayers’ money.

Heyhoe said now is the time to speak up to increase housing opportunities because all cities and counties in the state are required to have an nine-year plan to address the housing needs of each community. These plans have the potential to help low-income families stay in their communities and lower homelessness rates.

“Sometimes there are misconceptions around what that is," said Heyhoe. "Unfortunately, a thing called NIMBYism, not in my backyard, can pop up where perhaps people are fearful or don’t understand what permanent supportive housing is."

So far, five different developments in Orange County have set aside 305 units for affordable and permanent supportive housing options, but there is a need for much more.

Examples of developments United to End Homelessness have supported:

Housing Champions are volunteer citizen advocates in cities across Orange County proactively engaging with their elected and appointed leaders to ensure that every community is doing its best to develop more affordable and permanent supportive housing for all. Housing Champions live, work, worship, send their children to school and shop in the communities in which they advocate for housing solutions for homelessness. They provide a consistent, clear, positive voice and support for local elected officials to make courageous decisions greenlighting more of these homes in their communities.

Mercado said he wants to share his story to his city council and his community in hopes they can see how providing more housing opportunities will help people get back on their feet.

“I’m not afraid of going up to anybody when it comes to housing and homelessness because it could be you. It could be you," said Mercado.

With a roof over his head and a second chance to rebuild his business Sweet Mission, which is a baked goods company that trained and employed people who need a second chance at life, Mercado said he’ll fight for people to have the same opportunities that he did.