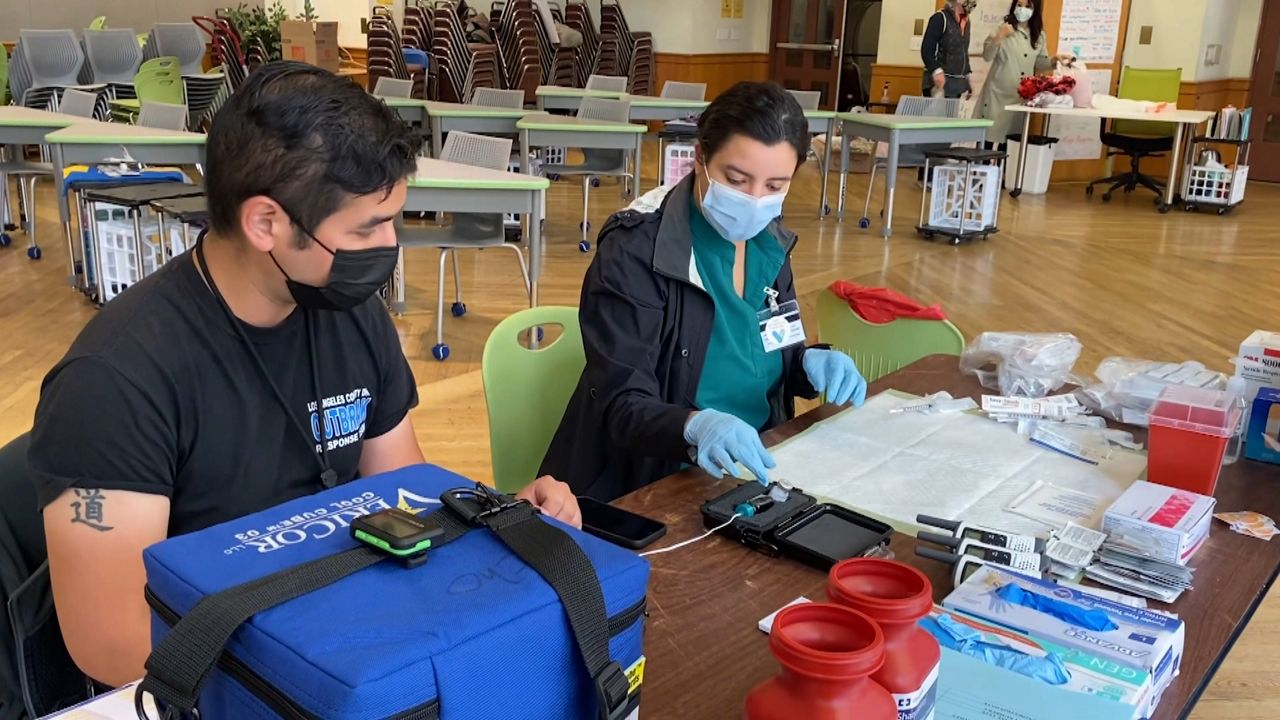 LA Dept. of Health Bring Vaccines to the Unhoused

LOS ANGELES — April Freeman has lived on the streets of Los Angeles for 10 years, having seen lots of hardship but nothing quite like COVID-19.

So when Freeman heard about a clinic for unhoused Angelenos that was distributing the vaccine, she decided to get the shot and was one of 40 unhoused people receiving her first dose of the Moderna vaccine at St. James Episcopal Church in Koreatown. The Church, along with a shower service for L.A.'s unhoused called Shower of Hope, are partnering with the Department of Health to encourage people to get vaccinated.

But Freeman, like many unhoused people in Los Angeles, said she was skeptical about the vaccine.

"I'm worried they're injecting me with the COVID virus," she said.

Mel Tillekeratne founded The Shower of Hope and has in fact seen considerable concern about the vaccine amongst the unhoused.

"Unfortunately they are skeptical, because they have been let down many times by medical institutions, said Tillekeratne. "Less than 10% of the unhoused at our sites say yes to the vaccine."

Tillekeratne added that the mistrust comes from a myriad of places, including mental health issues that plague many unhoused people. So to reassure people, Tillekeratne and his team talk with individuals, explaining that they have received the vaccines themselves. And they answer questions about side-effects.

"We see a lot of people say 'yes' after they talk to us and get educated about the vaccine."

Maria Esquivias, a nurse, was distributing the vaccine at St. James. She explained how working with the unhoused population is challenging but rewarding.

“It’s hard to work with these populations. Sometimes they are afraid or they don't trust you, but once you build a connection and talk to them, then they are able to go ahead and get the vaccine."

Throughout the pandemic, L.A.'s homeless population has proved to be resilient and COVID numbers in the community have remained relatively low. The county recently released new data on COVID and homelessness, and to date, 7,061 unhoused people tested positive. But that doesn't tell the whole story.

A new UCLA study has found that the mortality rate amongst the unhoused is much higher than the general population.

April Freeman is clear about why the vaccine is important to her: “I want to live. I don't want to die. It's the right thing to do."

Nurse Esquivias administered Freeman's shot and there was some trepidation.

"Ow," Freeman yelled before the needle touched her arm.

But soon enough it was over. She received her official vaccine certification card and was told to come back for her second dose in April.

"April in April" she said, laughing. "I was scared, but I feel safer now."