LOS ANGELES — It felt a little odd for Ceci Dominguez leaving home all dressed up during the pandemic, but Tuesday she celebrated a special occasion, getting her second dose of the COVID-19 vaccine.

After having difficulties scheduling an appointment for her first dose of the Moderna vaccine in January, Dominguez was apprehensive about L.A.'s vaccination system.

Rightfully so, seniors fought through the initial technical difficulties with the county’s appointment system to register for first doses, just to find out their second dose may be delayed.

Dodger Stadium and several other large vaccination sites were closed last week due to vaccine shortages.

At that point, just over a million L.A. residents had received their first dose and only about 300,000 their second dose.

Dominguez was worried, as time neared close to the end of her 28-day interval for the second shot.

Lo and behold, on the 25th day, her phone lit up with a text from Carbon Health, notifying her that she was scheduled for 8 a.m. Tuesday.

She says the system only gave her the option to accept or reschedule for a different day.

“I was going to cancel [because I had work] and I said don’t!" she said.

For her, this moment is life-changing.

The odds of contracting the virus seemed to come closer and closer as she saw 16 of her family members test positive.

Not only that, but in her East L.A. neighborhood, Dominguez is one of the only seniors fortunate enough to get vaccinated because appointments are scarce, and doses have been limited.

Now she's working closely with local elected officials to get seniors in her community vaccinated.

But she says the system still needs improvement.

Dominguez said, “The people that are waiting for their appointments, people who don’t know how to work the system and rely on other people, those are the people that we really need to reach.”

That’s why she chose to share the moment of gratitude when getting her final dose, with friends and family on Facebook Live.

“We get all this support from our family who are not able to take [the vaccine] yet, but they will [eventually],” she said.

Minutes before the injector walked up to her window, Dominguez reflected on her upcoming 68th birthday.

It'll be her second birthday during the pandemic, and she's humbled to be coming out on the other side to account history.

“People are going to remember did you survive the pandemic?" she said. "And we’re going to say 'yeah, we did. We fought through this and we survived. Many people did not but we did.'" 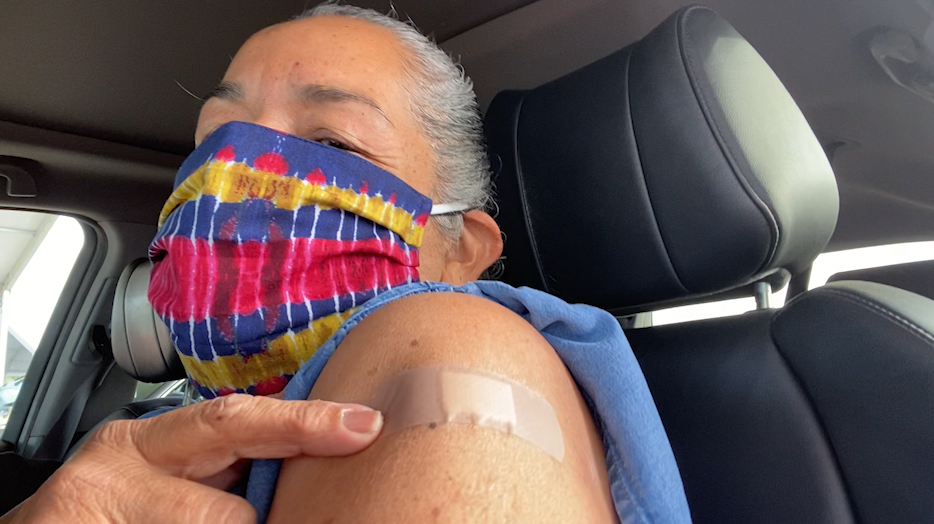