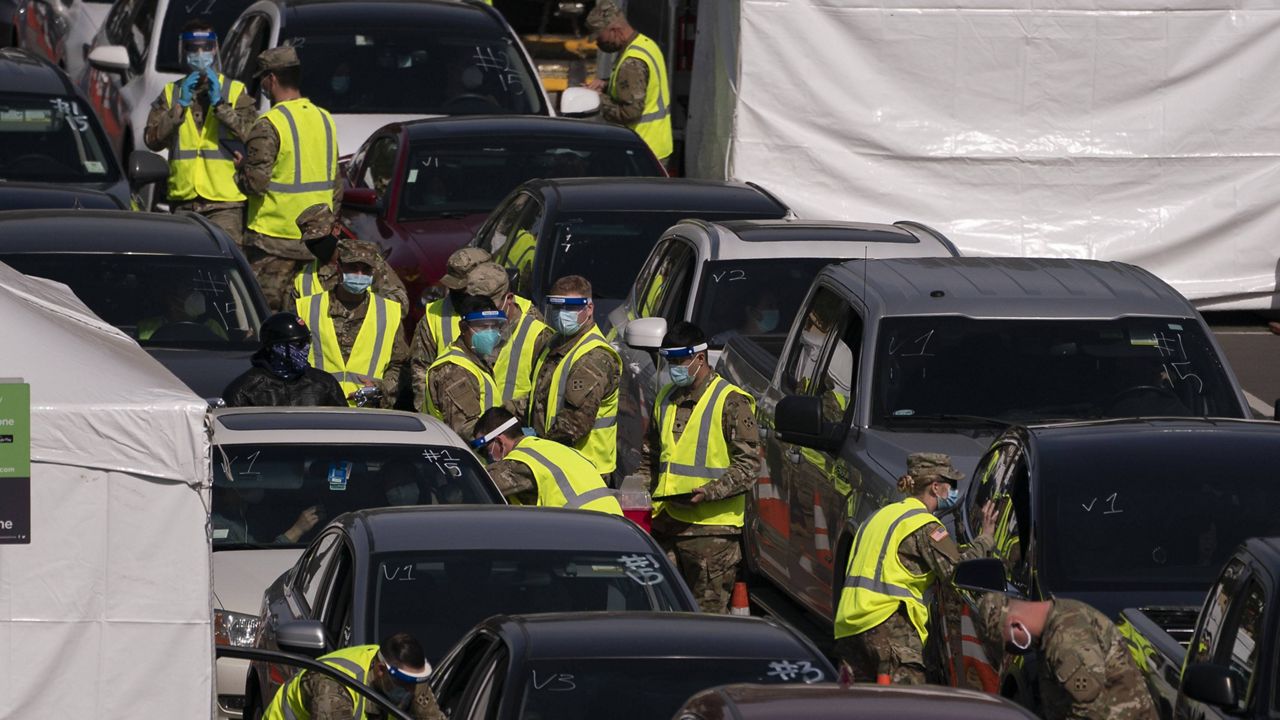 Members of the National Guard work at a joint state and federal COVID-19 vaccination site set up on the campus of California State University of Los Angeles in Los Angeles, Tuesday, Feb. 16, 2021. (AP Photo/Jae C. Hong)

LOS ANGELES (CNS) — A COVID-19 vaccination site established in a partnership between the federal government and the state opened Tuesday at Cal State Los Angeles, one of two in the state and the first phase of an effort expected to spread to 100 sites across the nation.

The CSULA site — along with a similar site at the Oakland-Alameda Coliseum — will be co-run by the Federal Emergency Management Agency and the state of California through the governor's Office of Emergency Services.

The site is expected to have an ultimate capacity of administering 6,000 doses per day, although it opened Monday with just 3,000 doses. Gov. Gavin Newsom said, however, the site would reach the 6,000-dose mark by the end of the week at both the Los Angeles and Oakland sites.

Shortages in supply have hampered vaccination efforts at county- and city-operated sites, but officials noted that the vaccines provided at the two FEMA sites will be in addition to the state's normal supply.

"We're committed to ensuring that everyone who wants a vaccine gets one," FEMA Administrator Bob Fenton said during a news conference at the CSULA site.

Fenton noted that the site was chosen specifically for its accessibility to hard-to-reach communities, "focusing on areas where minorities make up over 40% of the population, looking at other factors such as poverty, lack of housing or vehicle access."

He noted that the site will also have mobile units that will go into the community to reach people unable to travel on their own.

Newsom, also speaking at the site, hailed the location for providing better access to impacted residents.

"This is what this site is all about," Newsom said. "It's proximate to a community that has been disproportionately impacted by this pandemic. The effort here is to address that issue forthrightly."

The governor also hailed the vaccination effort in the state, despite continued problems with the supply of doses overall.

"There are only seven jurisdictions in the world that have administered more doses of the vaccine than the state of California -- some 6.3 million doses of the vaccine has now been administered here in the state of California," he said. "We recognize we have more work to do. the issue at the end of the day is supply. We need more Moderna vaccine, more Pfizer vaccine. We need to get the federal approval of the (Johnson & Johnson) vaccine. We need to provide an ample supply so we can plan not just two to three weeks out but over the course of the next few months til we get to the proverbial space we're all looking forward to, not that long from now, and that's the herd immunity."

Newsom noted a gradual increase in the number of doses the state has been receiving, saying the allotment was 1.08 million last week, 1.28 million this week and an anticipated 1.31 million next week. He also stressed that the state is averaging 201,000 doses administered per day, so the only limit to the vaccination effort is the supply of doses.

A team of more than 200 soldiers arrived in the Los Angeles area last week to help staff the vaccination site. The team was deployed from Fort Carson in Colorado.

FEMA will provide resources and federal staffing support, as well as operational support.

"We are grateful to President Biden and Governor Newsom for marshaling federal and state resources to significantly increase our ability to vaccinate our residents in Los Angeles County," said Hilda Solis, chair of the Los Angeles County Board of Supervisors.

"Our county and in particular our Latinx residents have been absolutely devastated by COVID-19. Establishing this large scale federal-state community vaccination center on the Cal State L.A. campus, in the heart of Los Angeles County and in a hard-hit community, is a welcome signal that we are ramping up at the federal, state and local level with the practical, boots-on- the-ground solutions we need to put an end to this deadly pandemic."

Metrolink is offering a direct connection to the site. Metrolink's Cal State LA Station is on the San Bernardino Line. Riders can reach the walk- up vaccination location by taking the elevator or stairs from the train platform to the university transit center and following directional signs to Structure A. Shuttles will take people from the transit center to the vaccination site.

"With a county this size, offering transportation options to vaccination sites is critical," said Solis, a Metrolink board member. "I am grateful that Metrolink will serve as a vital and accessible link for so many of our residents who rely on public transportation."

Registration for vaccine appointments at the Cal State L.A. site will be available at https://myturn.ca.gov/.