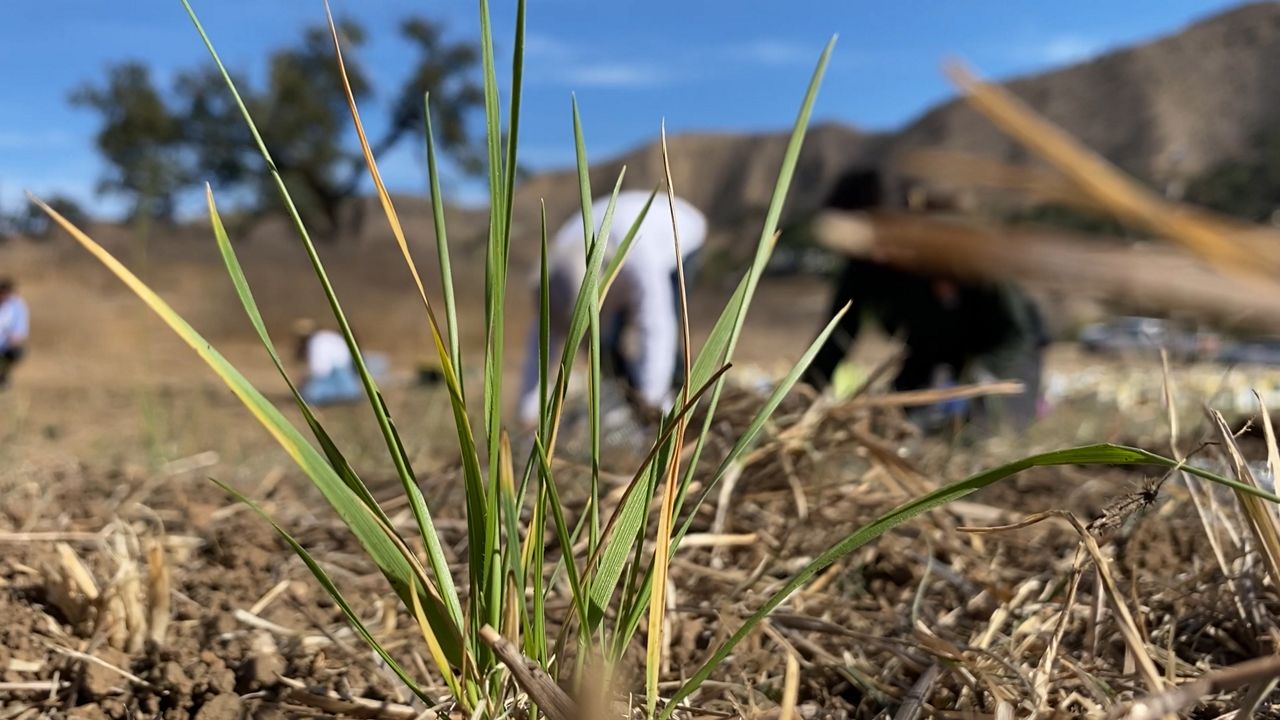 AGOURA HILLS, Calif. — Soil, seedlings and some volunteers are a few of the necessary elements needed to bring Paramount Ranch back to its old, flourishing self.

A group of helping hands pull out their green thumbs and get to work each Friday and Saturday.


Driving out to the work site located about a half a mile from the entrance to where Western Town stood, Ian Pohl pointed to a patch of land covered in neat rows of milk cartons. Each protects a precious clump of green.

"Right on our right there are 3,000 plants that we planted last Saturday," he said.

And that was only part of that day's work. On Nov. 20, hundreds of volunteers were able to get more than 5,000 plants in the ground, including several trees. It was their most productive planting day yet.

"They like to be hugged by the ground," he said as he tucked another seedling into the earth.

The major restoration project is funded by Re:wild and Snap Inc., the parent company of Snapchat. The goal of the first phase is to install 50,000 plants by April 2022. Since they started the project in early October, Pohl said they've planted well over 16,000, putting them slightly ahead of schedule. Ultimately, he thinks they'll make it — but only with volunteers.

"It takes a perpetual city to revitalize or restore the land around us," he said, looking over the dozen or so volunteers squatted on the ground around him. "It's not just up to us. It's up to the whole community."

"It feels great," said Lynn Sturgis, a volunteer from Santa Monica and an avid hiker, as she dug and planted — even though, she admitted, she'll likely be sore for a few days after.

Sturgis spent the morning of Black Friday at Paramount Ranch, taking part in what qualifies as an #OptOutside event, a movement to get people to reconnect with nature rather than spend the day after Thanksgiving digging for deals. She wasn't aware of the hashtag or the movement, but she loved the idea.

"I always think it's a fabulous idea to get outside," she said. "I go outside as much as I can. There's just something to be said about being able to hear the birds, see the birds. We live in the city, most of us, and we don't get to see this, and it's really very close."

Sturgis spends a lot of the time in the Santa Monica Mountains, and although she said she hates gardening at home — she leaves that chore to her husband — at Paramount Ranch, she is happy to get her hands dirty. Restoration makes her feel part of something bigger, replacing what was lost at the site of the Woolsey Fire.

"So it's nice that we'll be able to see it come back to what it could have been or should have been," she said.


Pohl noted that the volunteers this weekend concentrated primarily on purple needlegrass, or Stipa pulchra, a native species that will hopefully yield what he described as "a more wild, native grassland." He added that volunteers for these Friday and Saturday outings don't need any experience or knowledge of gardening — just a love of the natural world and a willingness to dig in.

"When you come out, you can put your hands in the ground and feel the earth," Pohl said. "[To] plant something that you know is going to keep going on, past you, past your kids and your grandkids."

The more volunteers now, Pohl said, the more people in the future can continue to enjoy the park. It's an investment of time and energy, but it will pay off in green dividends for seasons to come.