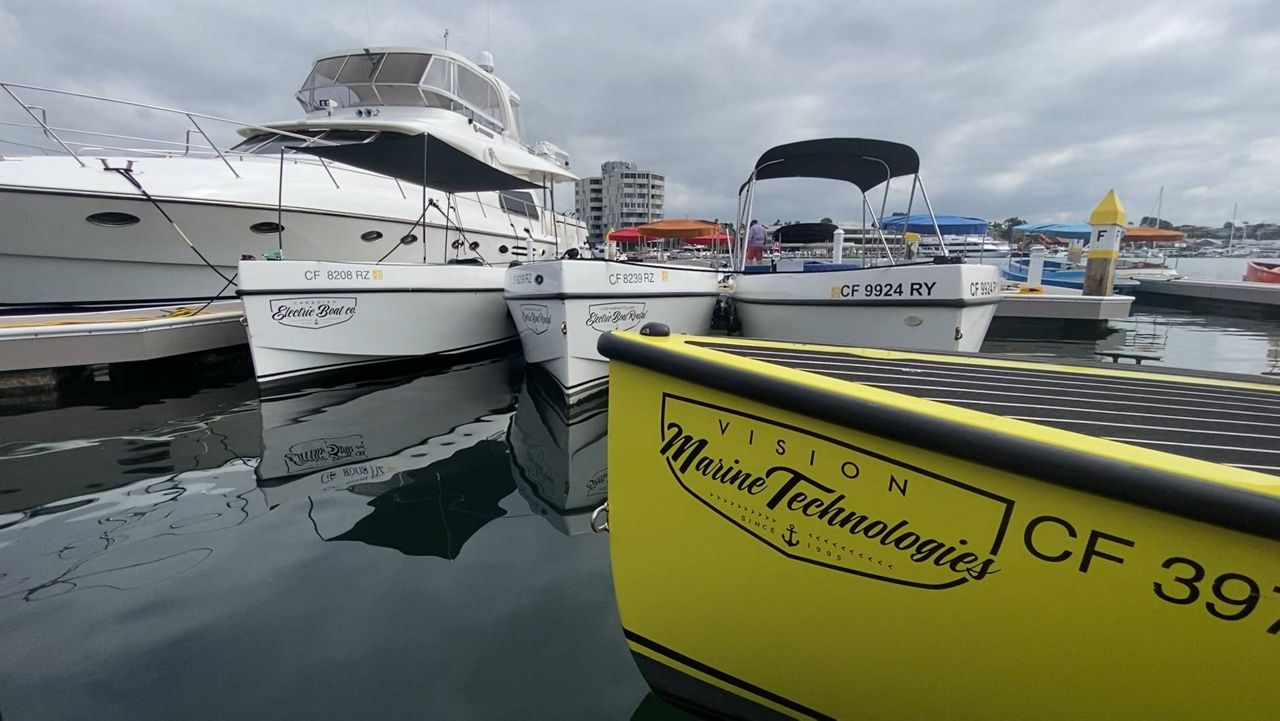 Electric boats could make a green wave on California's waters

NEWPORT BEACH, Calif. — On a typical day, Derek Gaines can be found working behind an E Boats Rental desk, but every now and then he gets to enjoy the perks of taking a boat out himself in the Newport Beach Harbor.

From ferries, powerboats and yachts Gaines has experienced it all. The scenic views bring him back on the water but he shared that traditional gas-powered boats do have their drawbacks.

“You’re usually yelling like you are at a bar and you know, sometimes, the engine is loud and you are smelling the fumes," he said.

Before gas-powered boats, electric powered canoes and boats were introduced to the world in the 1800s, but interest dwindled by the 1930s when oil powered boats began to take hold, according to the Electric Boat Association.

Now, renewed interest in electric boats like the one Gaines uses to steer through the harbor, made by Vision Marine Technologies, could bring changes out in the water.

The 10 passenger boats operate on high voltage charges that can last up to 10 hours of cruising and creates a quiet environment with zero emissions. The latest electric outboard motor from the tech company claims to reduce 90% of fuel and maintenance costs compared to traditional powerboats, according to the website.

However, will going electric be the answer to reducing greenhouse gases in the boating world?

Annelisa Moe, a water quality scientist with Heal the Bay believes it is a better option.

According to the EPA, transportation is one of the largest contributors of greenhouse gases as it accounted for about 30% of U.S. emissions in 2019.

“Because transportation is such a huge part of greenhouse gas emissions, changing to electric is one key way to reduce those emissions. Especially, if the energy that is fueling that electric engine is also coming from renewable sources,” Moe said.

If the use of fossil fuels are reduced in boating, especially on a grand scale for cruise and container-sized ships, Moe believes it could create a path to help mitigate the negative impacts of climate change on the environment and the ocean animals and humans depend on.

“We do need larger systemic change and so if we have larger scale transformation into the electric engine world then there’s just even fewer emissions going into our atmosphere,” Moe said.

While using electricity to power boats might not be new, Gaines is hoping the use of electric powered motors as an alternative will create a new green wave in boating.

“It’s going to change the way people are boating, interacting in the boating industry and just myself as an avid boater,” Gaines said.

The leisure boats are mostly used as hourly rentals to enjoy some time on the harbor, but the environment-friendly concept gives Gaines another reason to get back out in the water.