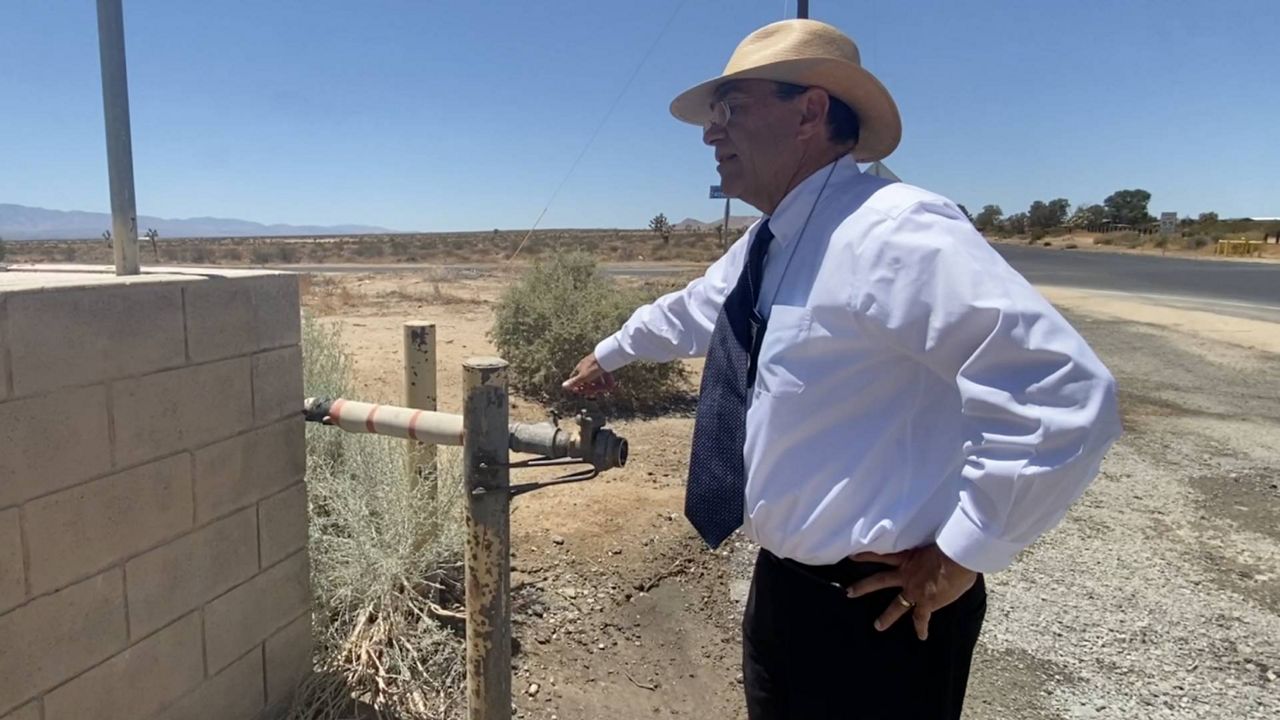 Chuck Bostwick serves as a field deputy for Supervisor Katherine Barger and has also lived in the unincorporated part of LA County for more than 30 years. (Spectrum News 1/Natalie Brunell)

LOS ANGELES — The hobby of cross-stitching has taught Billie Fox that she needs something now more than ever.

Cross-stitching is what she does to pass the time on the long hot summer days in the Antelope Valley.


"It teaches you patience," said Fox. "And they’re lucky I have the patience."

Fox needs patience because, as she explained, her community has been under siege by water thieves who are involved with the illegal marijuana grows in the area. Just last month, the well outside her home had its storage tank drawn so low that it temporarily cut off her water supply.

“We ran out of water, and nobody had water, and that was in the heat of the day,” Fox said.

Most of the high desert communities in that part of unincorporated Los Angeles County run on well water. The community well that Fox’s home relies on sits just yards from her backyard and has been the target of local growers.

Fox has been fighting back, becoming a water guardian of sorts for her neighborhood. She says she pushed back even when growers offered her money to tap into the well.

Fox reported the theft to officials, who said that unfortunately, it’s a common complaint.

Chuck Bostwick, who serves as a field deputy for Supervisor Katherine Barger and has lived in the area for more than 30 years, has been tracking the illegal cannabis grows and explained that the biggest issue with them is the toll taken on the valley’s most scarce resource.

"We are in a desert," he said. "Our water table has been dropping for years. Potentially, if it went on long enough, it could drop the water table even more."

In one case, thieves were able to get the key to a water station connected to a different small community and drew the water supply down so low that it put excessive pressure on the pumps and water mains and almost broke the entire system.

“The theft out of this, it’s just people causing trouble,” Bostwick said.

It’s hard to see the glass half-full in solving the problem. Driving the area, Bostwick sees makeshift water tankers pulling water from wells all the time. He noted that many are clearly unlicensed and overfilled, and some are so dangerous that they have caused deadly car crashes while transporting water.

In addition to water theft, Bostwick added that the grows destroy native wildlife and spread dangerous pesticides. Plus, residents he’s met have faced threat from growers possibly linked to cartels.


"A lot of the growers will try to intimidate them," Bostwick said. "I’ve heard of bullet holes in a car."

The county is working to escalate water theft from a misdemeanor to a felony with the help of federal officials so that penalties are more severe and act as a deterrent to the crime.

Some believe the solution is for the county to overturn its ban on commercial cannabis cultivation so that grows in the area are regulated. But Bostwick doesn’t agree because, as he explained, the water is too scarce to allow for grows.

"No, even if we did regulate it, I don’t know where the water would come from that would supply it," he said. "I think they’d move in, and they could outbid every water user here, and we’d have to have brown lawns on every yard because the marijuana growers are able to pay so much."

And that’s what concerns Fox as well. Her patience is tried when she thinks about the greed blooming in her backyard. She says she hopes the thieves are punished to the fullest extent of the law.

"All they think about is how much more money they could make, or how they could screw that person, you know? Or how they could take advantage of that person to their advantage and all that. And I don’t understand that. Where I come from, we looked out after each other. We helped our neighbors. And I miss that."