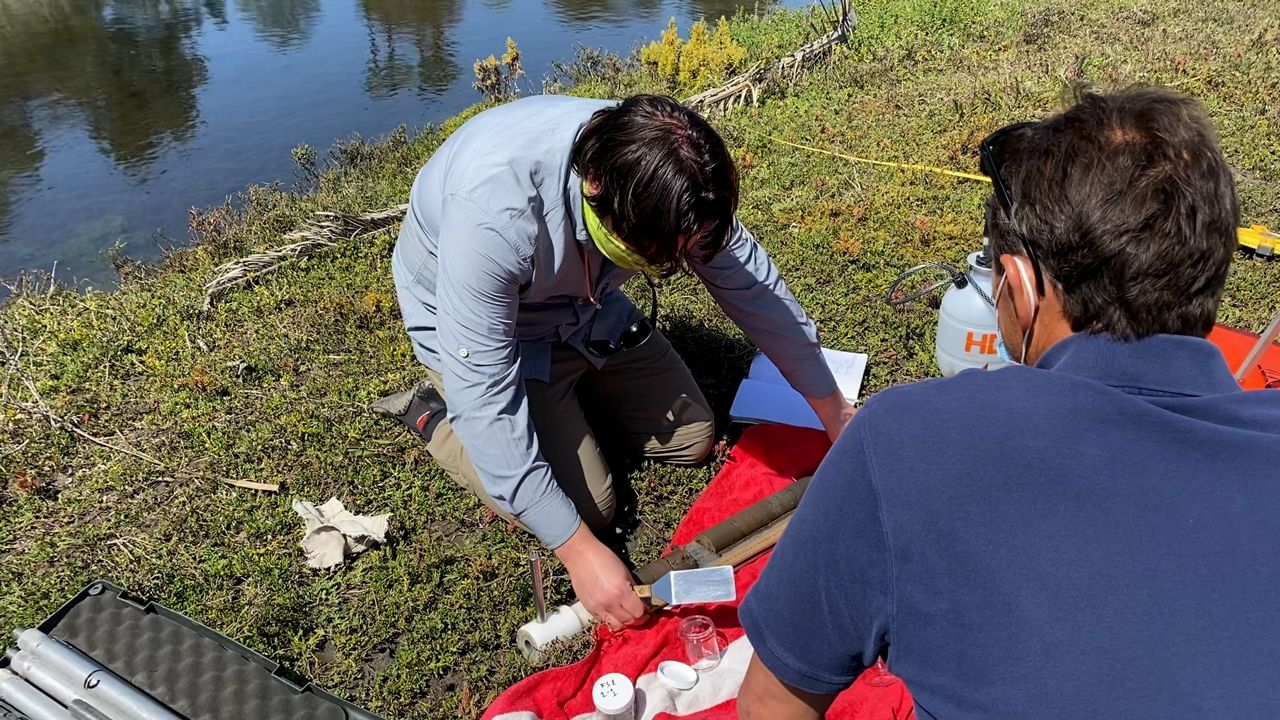 SAN DIEGO — Driving an electric vehicle and turning to alternative energy sources such as solar power are steps scientists say can help slow climate change. But researchers say there are also some potential climate solutions found in nature. A researcher in San Diego, along with an environmental nonprofit, is trying to figure out just how well wetlands can clean up the atmosphere and capture carbon.

The Formosa Slough in San Diego is part of the estimated 10% of wetlands left in the entire state of California. It's the location of an ongoing research project.

Scripps Institution of Oceanography Post-Doctoral researcher Matthew Costa carries a boring tool, called a Russian peat corer, inside a rifle case as he treks toward the waterline.

The tool helps the researcher collect samples of the mud at the wetlands.

"The whole idea of this is to understand how does this place – this coastal wetland – how effectively does it take carbon out of the atmosphere and keep it trapped in the ground," Costa said.

He said plants are like natural filters for carbon dioxide. Plants use light and CO2 to make the building blocks they need to grow. The plants keep the carbon and release oxygen. And even when the plants die, "It keeps that carbon from turning back into CO2," he said. "It stays as dead plant matter. Think of, kind of like mummified plants."

The mummified stuff is called "blue carbon." It's called blue carbon because it's carbon naturally captured in water environments like wetlands.

Costa takes several mud samples at different depths. Then he carefully cuts 5 cm samples and jars them. He'll repeat this process at different spots within Formosa Slough and different locations.

"The number one thing we want to measure is the amount of carbon in each depth of the core," he said. "And we can use that to calculate how much carbon has been stored here over the last so many years."

The samples are taken back to a lab to be baked dry. The dried samples are then crushed up using something similar to a mortar and pestle. Next, a tool is used to measure the amount of carbon in each sample, Costa said. Then there's some math involved, and that's how Costa said he could figure out how efficiently wetlands can capture carbon.

"This is important because carbon dioxide concentrations are almost double what they were before the industrial revolution, where humans have changed the global environment in a really big way by adding a lot of carbon to the atmosphere," Costa said.

Wildcoast is the nonprofit that helped raise funds to do this research that began at the end of 2020. Associate Director Zach Plopper said the data could help guide local and state decision-makers on what happens to particular wetlands, such as Formosa Slough, including how it's managed and preserved. Data shows about 90% of the wetlands in the state have already disappeared.

"The reason for that loss is overdevelopment on our coastline," Plopper said. "Development within our watersheds. Pollution has an effect on that. But there's also these news threats, such as sea-level rise."

"Step 1 is to understand how well or poorly these environments are capturing carbon," Plopper said.

That's why Costa will be collecting samples likely through the spring armed with his Russian peat corer or what Costa calls, "a mud time machine."

A look back in time that could help provide potential solutions to modern-day environmental challenges.

The team says it hopes to have a lot of the analysis done by the end of the spring. And Wildcoast says it hopes to share the reports with local and state decision-makers to help guide conservation measures for these wetland areas.

Wildcoast has been doing similar research and restoration work in mangroves in Mexico for decades.