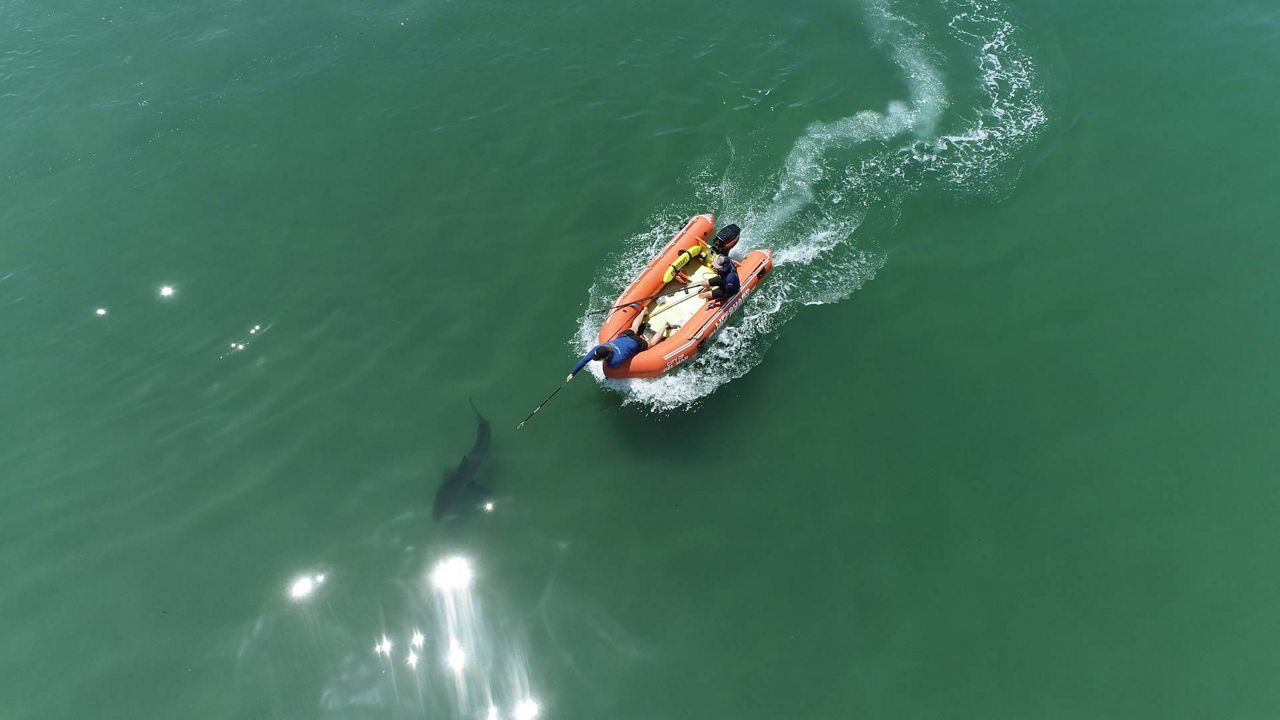 LONG BEACH, Calif. — The waters off the coast of Southern California are nurseries for sharks.

For a team of researchers in Long Beach who have been tagging sharks for about 15 years, they hit a record in 2020.

“It figures the one year that we have COVID, the year that we faced the greatest restrictions in terms of how we work, that we were able to tag more sharks than ever before,” said Cal State Long Beach professor Chris Lowe, who is also the director of the university’s Shark Lab.

The Shark Lab team tagged 53 great white sharks in 2020 between Santa Barbara and San Diego, which Dr. Lowe reports is a whole lot compared to most years. The team has been tagging since 2006. Here are the numbers for the past few years:

"Typically, any year, we would tag anywhere between eight and 12 juvenile sharks," said Dr. Lowe.

No surprise for the lifelong shark enthusiast and expert, 2020 was an exciting year. But the marine biologist noted that the excitement isn’t just because of the numbers of sharks tagged. Last year’s shark tags revealed some new things.

"We just didn’t see as many in Huntington Beach and Long Beach and Santa Monica Bay that we normally do, even Dana Point, which has been a hot spot the last few years," said Lowe.

Dr. Lowe added that most of the tagged sharks were in Santa Barbara or San Diego, and that some of the sharks tagged in March in Santa Barbara were still being detected into late November, and even a few sharks now.

"We’ve never had sharks stay around for that long," he said.

Now the team is working on figuring out why. But with a lifetime of learning, Dr. Lowe has his theories.

"We know that very young white sharks are very temperature-sensitive," he said.

He explained that, like Goldilocks and her porridge, baby white sharks dislike water that’s too hot or too cold. Southern California’s 2020 summer was warm with relatively smaller, calmer waves.

While the team tagged more than three times the number of sharks in 2020 compared to 2019, "we’re pretty sure that the shark population hasn’t tripled since last year," he added.

And Dr. Lowe would know. He’s been around sharks and the water pretty much his entire life.

"I grew up on Martha’s Vineyard. And all there was to do was swim, and dive, and boat."


He explained that he was always with a fishing rod in hand.

"I can remember one day catching a fish, and I didn’t know what it was," said Dr. Lowe. "And it turned out it was a dog fish. And I had to go to the library to look it up. And I found a shark book. And for me, that was it."

Dr. Lowe was the first of his family to go to college. He told his parents he wanted to become a marine biologist.

"They were like, 'OK, do people pay you to do that?'" he said. "And I thought, I don’t really care because I love doing it so much."

And he’s stuck to it, dedicating his research to sharks. With new behavior observed in the record number of sharks tagged in 2020, the Shark Lab will be busy trying to figure out why some of the sharks stayed longer than normal, and why these sharks hung out in larger aggregates or groups compared to recent years.