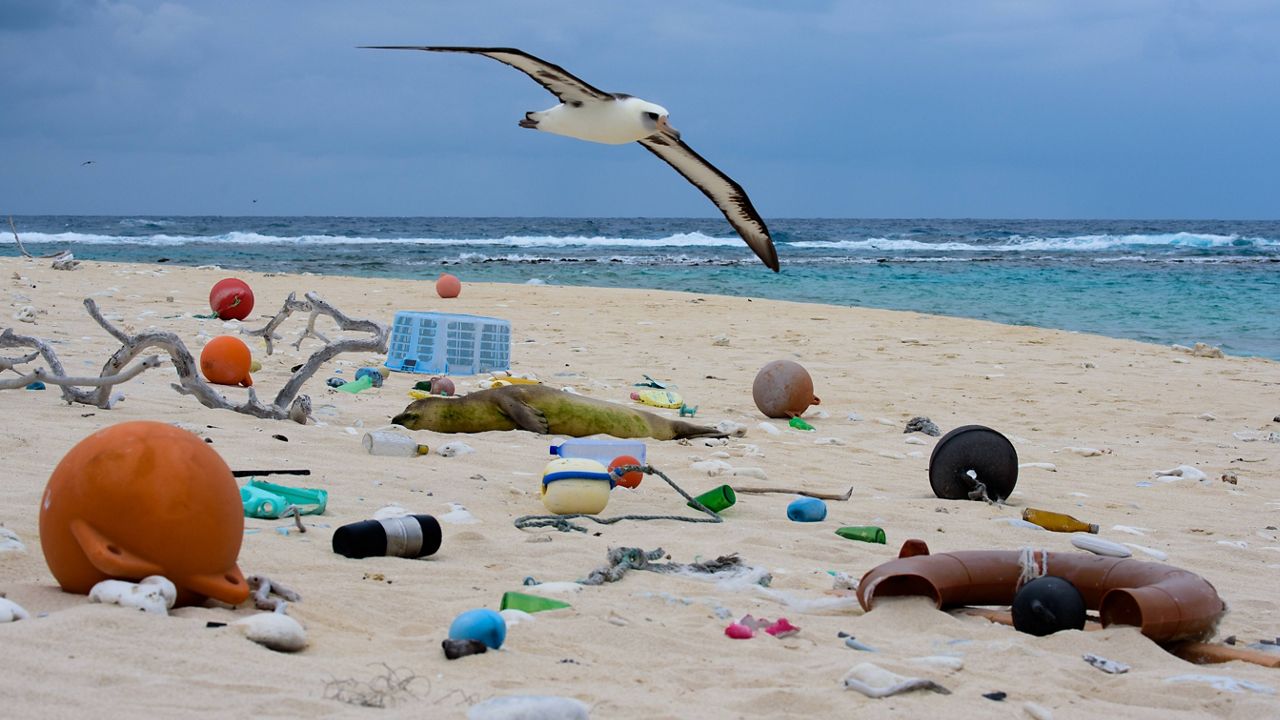 For many Americans, the image of a sea turtle with a straw stuck in its nostril was an indelible, unshakable warning about plastic waste. Now, five years after that turtle made headlines, the ocean conservation group Oceana is raising the alarm about a multitude of other marine animals that are being killed by plastic throwaways.

The new report, “Choked, Strangled, Drowned,” found 40 different species in the U.S. that are swallowing plastic or becoming entangled in it. While bags, balloons, recreational fishing lines, plastic sheeting, and food wrappers are the most common plastics ingested by sea turtles, otters, whales and other marine animals, plastic packing straps, bags, and balloons with strings are the most common plastics entangling them, the study found.

“There’s a lot of misconceptions that this is an Asia problem or a poor country problem – places that don’t have waste management, but it’s a U.S. problem too,” said Alexandra Cousteau, granddaughter of the legendary French ocean conservationist Jacques Cousteau and senior adviser to Oceana.

“It’s a fundamental design flaw that we are creating something that lasts forever to solve a momentary need,” Cousteau said of single-use plastics.

Oceana estimates that 15 million metric tons of plastic flood into the world’s oceans every year. Whether it’s a straw or cup escaping from a recycling center and entering the natural environment through a river, or a fishing net that’s discarded directly into the ocean, the equivalent of two garbage trucks filled with plastic enter the water every minute, the group says.

From there, animals often mistake the plastic for food or swallow it while swimming, leading to obstructions in their digestive tract, lacerations of their intestines, and, frequently, starvation and death. Animals who become entangled often drown or choke to death, the report found.

Of the 1,792 animals the study examined that had swallowed or become entangled in plastic, almost half were sea turtles. The rest were marine mammals from 34 different species. Almost 90% of the animals studied were listed as endangered or threatened with extinction under the Endangered Species Act.

When Nichols first started studying sea turtles 30 years ago, there was plastic pollution on the beaches where the turtles laid their eggs, but not so much that it couldn’t be cleaned up by hand. Over the years, “It gradually became worse and worse until you just couldn't clean it all up, and we started seeing more and more plastic inside turtles when we would do necropsies.”

It isn’t uncommon for sea turtles who have died from plastic ingestion to have hundreds of pieces of plastic inside their bodies, Nichols said. According to the Oceana study, microplastics, or pieces of plastic debris that are less than 5 millimeters in size, perforated the gastrointestinal tract of a baby sea turtle.

For the study, Oceana worked with 13 marine life organizations and government agencies to compile data on sea turtle and marine mammal plastic ingestion and entanglement. Using data from 2009 to 2018 collected from 21 states along the U.S. coast, it looked at the cause of death for various sea animals who had been found on shore and examined by trained personnel.

Among their findings: a fur seal that died from an eight-inch piece of plastic lodged inside its stomach, a dolphin with a food wrapper lodged in its esophagus, a whale that swallowed a DVD case that lacerated her stomach, and a manatee whose stomach included a plastic bag, straw, string, and pantyhose.

“These animals play very important roles in our oceans, and to find this material that was only recently created by humankind is now threatening the survival perhaps of many of these endangered and threatened animals is a real concern,” said Dr. Kimberly Warner, lead author of the Oceana study.

“This is a huge societal problem we have to grapple with at local, regional, and national levels,” Warner said.

The majority of products Americans consume are designed to be utilized and disposed of rather than refilled, reused, reconstituted, or composted, though there have been efforts to curb consumers’ seemingly insatiable appetite for single-use plastics. Earlier this year, California legislators considered a bill called the Circular Economy and Pollution Reduction Act that would have required 75 percent of all packaging sold or distributed in the state to be recycled or composted into something else. While that legislation did not pass, a revised version could be introduced in the future.

“There’s an enormous pollution problem, and there’s an enormous waste management problem,” California Senator and Circular Economy bill co-author Ben Allen (D-Santa Monica) told Spectrum News 1 in August. “Our cities are unable to handle the current flood of waste that is going through the system.”

But there are solutions for governments, corporations, and individuals. Oceana recommends that companies reduce the production of unnecessary single-use plastic, offer plastic-free choices to consumers, and move to establish widespread use of reusable and refillable containers and packaging. It urges national, state, and local governments to enact policies that reduce the production and use of single plastics, and federal agencies such as the U.S. Fish and Wildlife Service to improve, standardize, and require reporting of plastic interaction cases with animals.

There’s a lot individual people can do, too.

"Support local and federal policies. Ask companies to give them alternatives to plastic. People can use less plastic in their daily lives and actively search for alternatives,” Cousteau said. “Making change can help us thrive and help our oceans thrive, and then everybody wins.”