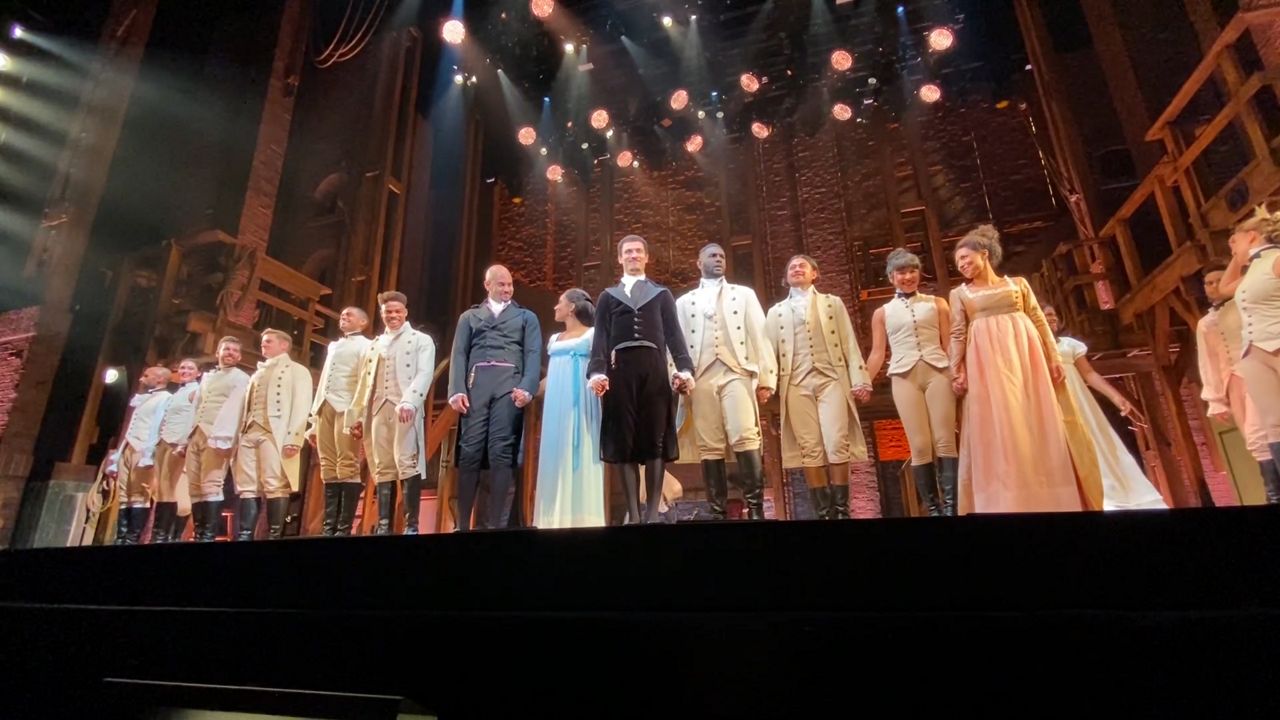 LOS ANGELES — It was a curtain call 17 months in the making.

The cast of "Hamilton" at the Hollywood Pantages Theatre couldn’t wait for it — and neither could the audience, springing out of their seats for a sustained standing ovation that’s been pent up for 523 days.


Among the audience was 9-year-old Elena Donato, who has been dreaming of this day for a long time.

“So many months,” she said, standing in front of the theater Tuesday evening. “Ever since I watched it on Disney+, I’ve been dying to see it in actually real life.”

Elena and her mom, Jennifer Hernandez, were among the first people to line up for the first performance, arriving at the iconic Hollywood venue roughly 90 minutes before show time. But 90 minutes was nothing considering they originally had tickets for April 2020.

“They got canceled, and again, and then finally we’ve here today,” Hernandez said. “We can’t wait. We’ve been counting down the days.”

Pantages general manager Jeff Loeb has been counting as well.

"It feels amazing," he said. "I've never felt anything like this, to be closed for 17 months and then to be able to open our doors and to be greeted with lines like this of enthusiastic patrons."

This Los Angeles cast was set to begin public performances March 2020, but just hours before the downbeat, the Pantages closed its doors. The theater hardly sat dormant: The space was used as a voting center and was also the location of several blood drives and pop-up vaccination clinics.

But Tuesday’s show marked the first time audiences were finally allowed back into the room where it’s happens — roughly 2,700 hundred people, all of whom had to go through a check-in process that involved one additional pandemic-era protocol.

“We determined over the summer that the safest way to reopen was to require vaccines,” Loeb said. “So that’s of our staff, that’s of the performers, of the musicians but most importantly, that’s of our patrons.”

Proof of vaccination was checked even before tickets, as patrons presented cards, printouts or their mobile devices. For those unable to get vaccinated — like Elena, who is still too young — the theater is requiring a negative PCR test taken within 72 hours of the performance.

“There was a little bit of a line, but we go through it very quickly,” Loeb said. “So it’s vaccination, bag check, mobile tickets and you are in the building.”

The theater, Loeb says, is exactly where audiences belong. During the closure, he had seen the Pantages completely empty and knew he’d never be satisfied until it was bustling once again.

“This building is special, but it’s not magical until there’s performers on the stage, musicians in the pit and audience in the seat,” he said, once the first act was underway. “Tonight proved that. It was absolutely stunning.”

Stepping into the room where it happens, Elena definitely felt that magic.

“Why does this look like it’s a castle?” she gasped as she took it all in: the statues, the lush red staircase, the ornate ceiling.

At each entrance to the house, ushers greeted guests like they were Thomas Jefferson arriving at the top of act two.

“There you are,” one usher beamed as a group of four approached with their tickets. “We’ve missed you. How’ve you been?”


From her seat in the balcony, Elena marveled at familiar set.

The electric energy of the room filled Elena right down to her feet, which were rapidly tapping on the floor in unsuppressed enthusiasm. The audience was applauding and cheering, even before the actors reached the stage, and erupted into screams when Alexander Hamilton, played by Jamael Westman, reached center stage and sang his name.

This is only the second production of "Hamilton" in the world to reopen, and the audience was hungry for it, showing their appreciation in the extended standing ovation — not that Elena noticed. It was a late night for a 9-year-old, who was sound asleep by the end of the show, her dream having already come true.

"Hamilton" is slated to run through January 2022. There will also be holding a digital lottery with 40 $10 tickets available for each performance. For details, visit here.