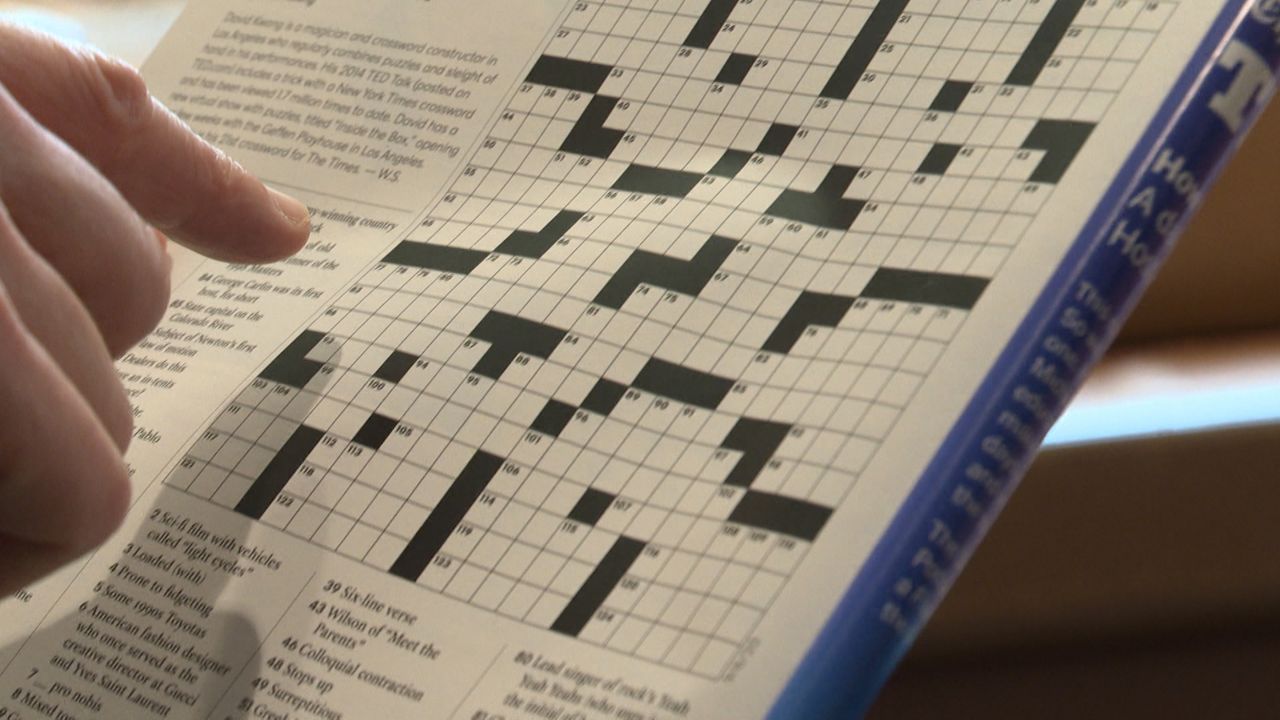 LOS ANGELES — David Kwong sees puzzles everywhere. His brain seems to be always playing games with him, transposing letters, finding connections, looking for hidden themes. It's a job. Kwong constructs crosswords for the New York Times, but it's also built into his DNA.

The magician and self-professed word nerd can trace his love of language back to his mother, who he said "was a history professor and also a word nerd."

He started constructing crossword puzzles in his early 20s and says the act of creating a puzzle "is in itself a puzzle." Especially a Sunday Times puzzle. He's published four.

He said it starts with the theme. "There's always some wordplay that runs through the grid. You think of that first," he explained. "You try to find long phrases that carry this theme, and then around that, you try to make it all work. We call that the fill. So you're putting, in other words, to make it all fit together."

A Sunday puzzle can take years to make, while he can construct a Monday puzzle in a matter of hours.

Kwong already felt like we were living in a Golden Age of puzzles — from escape rooms to Candy Crush — but puzzles became a bit of a lifeline when the pandemic hit.

"Here we are stuck at home," he remembered thinking in March, "and I realized this is the perfect time to do puzzles."

In his show, Inside the Box, the latest online interactive production from the Geffen Stayhouse, he talks about some of the great puzzle minds of all-time, including Margaret Ferrar, the first crossword editor for the New York Times.

"She has this wonderful quote, that is, 'You can't think of your worries when you're solving a crossword puzzle,'" Kwong said. "And I think that's so true. It just applies to what's going on right now."

Hey puzzle heads! Exciting news to share ... Get ready for INSIDE THE BOX a virtual show of puzzles and games with the @geffenplayhouse A virtual performance filled with mystery, history, and surprises. Oh yeah and puzzles. PUZZLES FOR DAYS 🎉🎉🎉 Premieres 9/29. All ages welcome! Please tag your family and friends who love puzzles and games! https://www.geffenplayhouse.org/shows/inside-the-box/ (link in bio)

The show takes audience members through a series of interactive games. The kind of games Kwong would play with live audiences before COVID-19 or with celebrity guests over Instagram Live once the shutdown began.

This show is an extension of that concept, and Zoom, he said, is a natural stage for a production about puzzles.

"I wanted to design a show that got people interacting across the virtual lines of Zoom, that take advantage of the 5 x 5 grid," he explained. "It's almost like everyone's a human crossword puzzle."

Kwong was supposed to perform his show, The Enigmatist, at the Geffen in May, but it has been postponed until next year.

"Not canceled," he insisted. "We're doing it when live theater comes back."

In the meantime, he'll continue challenging puzzlers online and in the New York Times. One of the trickiest parts of building a puzzle, he said, is working within the constraints of symmetry — rotational symmetry, actually — that crossword puzzles require. But it's those rules that make it so rewarding.

"When you have rules that you have to follow and nevertheless be creative within those rules, it brings out the best of us," he said. "And that's a big theme of the show, too, right? We are constrained right now, but everybody is being so creative. People are coming up with inventive ways to reach one another. We are resilient, and we are innovative. And that's a big part of the theme of this show.

Thinking outside the box to find ways to entertain, inspire, and connect inside of it.

Inside the Box has been extended through January 3. For information about tickets, visit the Geffen Playhouse website.