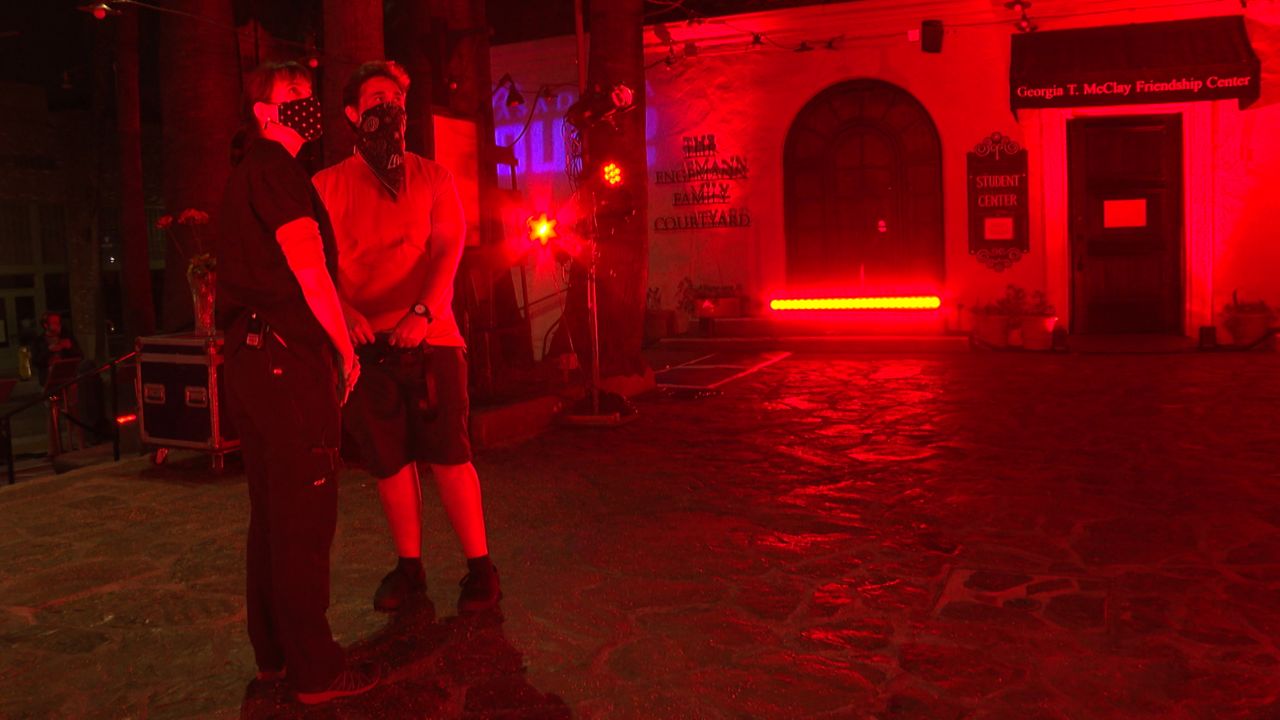 PASADENA, Calif. – It was a nationwide distress call, seen from from coast to coast.

On September 1, more than 1,500 locations around the country were lit up red. At the Pasadena Playhouse, the bold, blinking crimson lights evoked a sense of emergency.

“More often than not it’s used for danger and distress," her partner David Patrick added.

Seefeldt, who owns a company called Simple Lighting, has traveled the world with acts including Lorde and Earth, Wind, and Fire. She said she’s lost $50 thousand in revenue from canceled events and knows it will be a while before she’s back on the road.

“You can’t put 12 people on a tour bus and drive city to city to city right now," she explained. "It’s going to be a long time until that comes back.”

It will be a long time before theater comes back, too. While other businesses, like restaurants, have found ways to reopen, the Playhouse’s Producing Artistic Director Danny Feldman said live event spaces are different.

"We are the very last and will be the very last to open simply because of safety," he said. "Because we are in rooms where people are gathered together breathing the same air, which is the exact thing we cannot be doing at this time.”

For Feldman, it's a point of pride that each show produced at the Playhouse employs roughly 100 local people. And that’s just one theater. By some estimates, the $877-billion live events industry employs over 12 million people.

“Those people right now are unemployed and on top of that there is not an end in sight," Feldman said.

This is why Seefeldt and her colleagues volunteered their time to transform the courtyard as part of #RedAlertRESTART — a movement hoping to draw attention to the dire situation the industry is in. They’re calling on Congress to pass the RESTART Act, to help businesses hardest hit by the pandemic. They also want to see an extension of the original $600 in federal pandemic unemployment compensation.

“We really need that back because that is the difference between us being able to pay the bills, pay the rent, and buy food," Seefeldt said.

While she primarily tours with musical acts, she worked at the Playhouse earlier this year as a lighting programmer for "The Father," the last production on the historic stage before the pandemic forced the theater to close its doors. She said she saw this event as a chance for the Playhouse — a community-supported theater and the state theater of California — to engage with the public again. Passersby were encouraged to leave notes explaining what they miss about live theater.

“It makes us all feel so much better to be able to read these messages and know that people still want to go see shows," she said. "As soon as we can get back to it, that we will still have an audience again.”

It won't be soon, she said. She suspects it will take a long time, but she said she's looking forward to bringing the lights up again the moment it’s safe to do so.