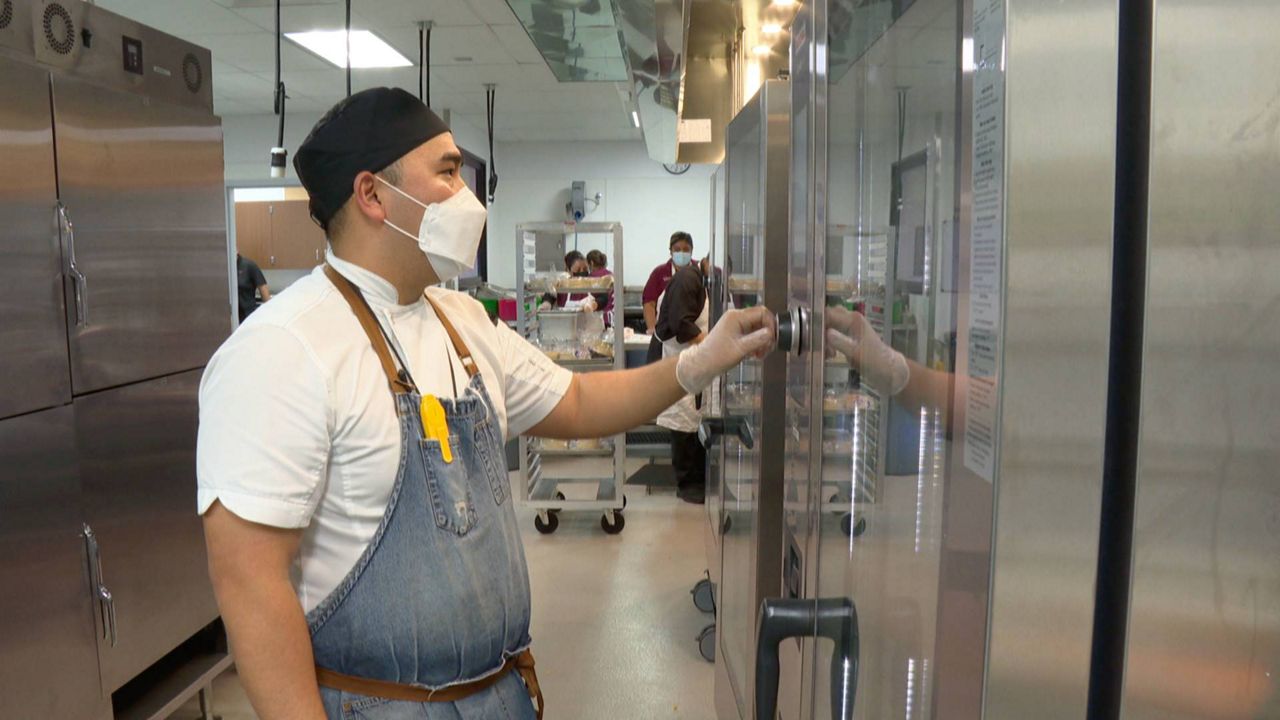 Big commercial kitchens have a sense of urgency, and chef Jonathan Park is finding out school kitchens do as well. (Spectrum News 1/Parker Collins)


This is because the $1.5 trillion omnibus spending bill Congress just passed doesn’t include waiver extensions.

Big commercial kitchens have a sense of urgency, and chef Jonathan Park is finding out school kitchens do as well. He used to cook in restaurants and hotels. Then, about a month ago, he began serving students at Saddleback High School.

On a recent Friday, lunch included carnitas and esquite made from scratch. For a long time, all lunch entrees were frozen and pre-made. Now, the district is trying to do more actual cooking.

It’s a muscle they’re not used to flexing. That’s why they’ve hired Park and chef Jennifer Minichiello to develop recipes and train current employees on basic kitchen skills they haven’t needed until now.

Minichiello gave the ground beef a taste test before OK'ing the batch. It’s one of the first things they’ve begun cooking for themselves at the district’s central kitchen.

“I think we all look at it as a challenge, and I think that as chefs, that’s one of the things we always look for. If you’re doing the same thing day in, day out, that’s not all that fun,” said Minichiello.

“Of course, home food is better because you get it from your mother and stuff, but like, it’s really good, though. It’s gotten a lot better,” said Briana.


Improvement takes a lot of trial and error. You can see it in the recipe notes Park keeps everywhere. They also have to build in flexibility in case of shortages and price spikes.

“Once you find that you think it’s perfect, I think something’s wrong, actually. There’s always something you can change to make it a little bit better,” said Park.

For most kids, lunchtime is the long-awaited treat in the middle of a day full of classes. It’ll get even sweeter with some tastier food.

Josh Goddard, director of nutrition services, says the department is currently in the design phase to build a new central kitchen. Given the limited space and aging equipment, he says it would be impossible to cook 100% of student meals in the current building even if they tried.