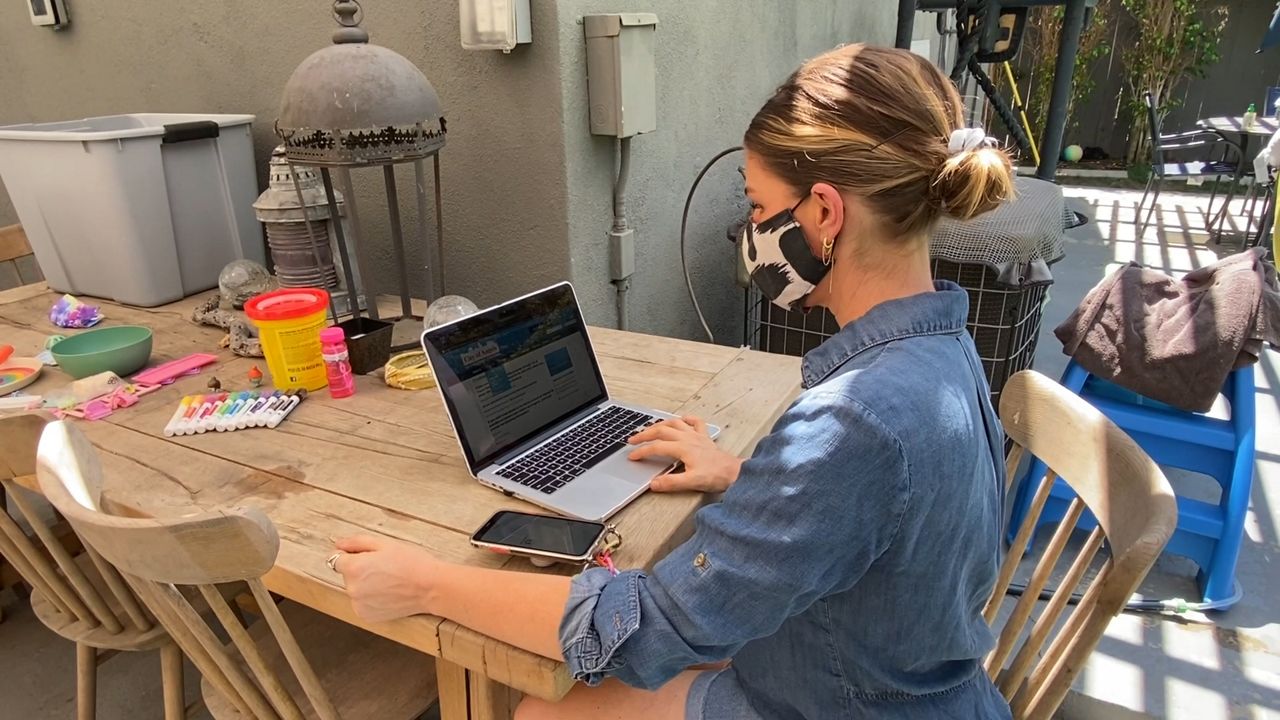 LOS ANGELES — Patience is an art, and these days, Cassandra Shanks is becoming a bit of a master.

“Wow! I love it,” she cooed over daughter Elodie’s chalk drawing of a monster. “It’s a masterpiece.”

Shanks is a mother of two school-aged children at opposite ends of their learning careers. Her older daughter is entering her final year of high school while her youngest is about to start transitional kindergarten. As the first day of school quickly approaches, Shanks has been anxiously watching the rise in COVID-19 cases.

“We are an immuno-compromised family,” she said. “My husband has a rare disease that has caused us to take extra precautions.”

While she is planning to send her fully vaccinated 17-year-old to high school in person, Shanks is worried about Elodie, who is 4-and-a-half and too young to be vaccinated, bringing the virus home.

"The risk of her bringing home particularly the delta variant is so high," she said. "Not only for her health, but to then spread it to my husband who would just be devastated by this disease, is just very scary to us right now."

For Elodie, her parents opted for LAUSD’s online independent study program through City of Angels. The deadline to express an interest in online learning was last Friday which, according to LAUSD, would “ensure enough teachers and classes are prepared to support students for the first day of school — whether in-person or online.”

A spokeswoman for the district says that as of Sunday, more than 12,500 students selected online independent learning — representing just under 3% of the district’s total enrollment.

As of Monday morning, Shanks still wasn’t sure if Elodie had been accepted into the program.

“Well, that is a great question,” she said with a laugh. “We’ve been asking ourselves that daily and trying not to develop an anxiety disorder over it.”

Shanks and thousands of other parents started this week waiting for any sort of update, including a phone call from City of Angels — the next step in what LAUSD calls a multi-step process.

“They were probably underprepared for this onslaught of students interested in independent study as parents learned that there wasn’t a distanced option with the delta spike,” Shanks said.


By the end of the day, families began posting updates on social media saying they’d received phone calls or emails announcing that all families who had expressed an interest in the online program would be enrolled. One big question was finally answered.

As for Shanks’ oldest, she will start her senior year in person because her courses require a lot of hands-on lab work. Plus, she is worried about her AP credits, with college around the corner. But she and her mom have made a deal to reassess as the school year progresses.

"Perhaps, like, there’s not as much mask enforcement as we are hoping," Shanks said. "If social distancing is completely eliminated, if there’s not a safe place to eat, we will sort of go semester-by-semester in terms of what feels safest for the family."

For now, Shanks is back to waiting — waiting for a second email from City of Angels with instructions for the first day of school, waiting to see how things are actually handled at the high school and waiting for the FDA to approve a vaccine for children which, for her family, can’t happen soon enough.