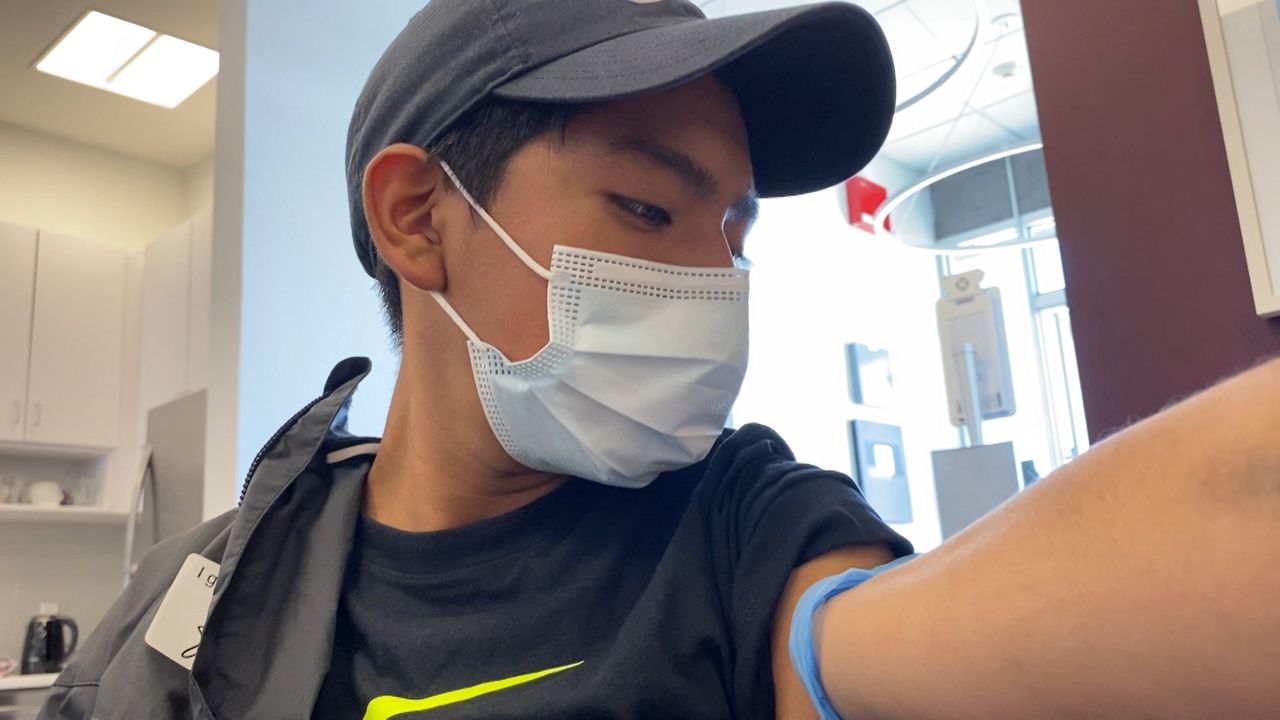 LOS ANGELES — On Tuesday afternoon, 15-year-old Daniel Hernandez was standing in line at a mobile COVID-19 clinic near his house in Boyle Heights.

Daniel had been debating getting vaccinated for a while but decided that this was the time with in-person classes at his high school set to resume in a few weeks.


"I feel like we should all get vaccinated to help the community," Daniel said.

But Daniel had some reservations and, for the past few months, resisted getting the shot. He explained there was considerable mistrust toward the U.S. government and its policies in his home growing up.

"With my parents being immigrants, they're scared to ask for help because they're scared of immigration," he said. "The government has never helped us. When they told us about the free vaccinations, I was like, 'Wow, they're actually helping us?' I was debating if I should get it or not."

Over the past few weeks, however, several factors changed Daniel's mind. He noted that the rise in COVID-19 cases, the highly contagious delta variant, and the imminent return to school contributed to his decision to get the shot.

"At my school, it's a requirement now," he said. "If you don't have the vaccine, you have to get tested every week."

The teenager received his first dose of the Pfizer vaccine at Inner City Struggle, a community organization in East Los Angeles working with St. John's Well Child and Family Center to distribute vaccines.

While people of all ages could get the vaccine, Mario Chavez, director of Government Affairs and Community Outreach at St. John's, explained that the day's focus was vaccinating young people.

"We're trying to encourage people to get vaccinated before they go back to school," he said.

"We've seen the number of cases rise in people contracting COVID and getting hospitalized, so it's important if folks are sending their kids back to school that we vaccinate as many eligible youth as possible," Chavez said.

Doctors and emergency rooms are already seeing the impact in rising cases among young people across LA County. Dr. Puneet Gupta, assistant medical director with the LA County Fire Department, has watched as more people with COVID-19 are admitted to hospitals.

"We're seeing a significant increase in the number of kids and pediatrics getting COVID, and part of that is the increased interaction," he said. "It's incredibly important for them [young people] to get vaccinated."


Gupta added that emergency medical teams are much better equipped to deal with coronavirus cases now, but as hospitalizations rise, he is concerned about a surge.

"If you've had a recent infection in the past four months, you probably have some antibodies," he said. "Yes, the vaccination will protect us, and we have a large percent of the population that has been vaccinated. But we are also having more contacts, concerts. People are going out. People are meeting each other."

Gupta said he doesn't want to see a repeat of last winter.

"I'm worried that we are going to be back to December and January, where our system is close to breaking."

Meanwhile, at Inner City Struggle's vaccine clinic, things felt more optimistic. By the end of the day, organizers managed to vaccinate more than 50 people, including Daniel. He was nervous before getting the shot but afterward was smiling.

"I'm proud of myself," he said. "COVID is less of a threat now that I have the vaccine. I'm just glad I got it."