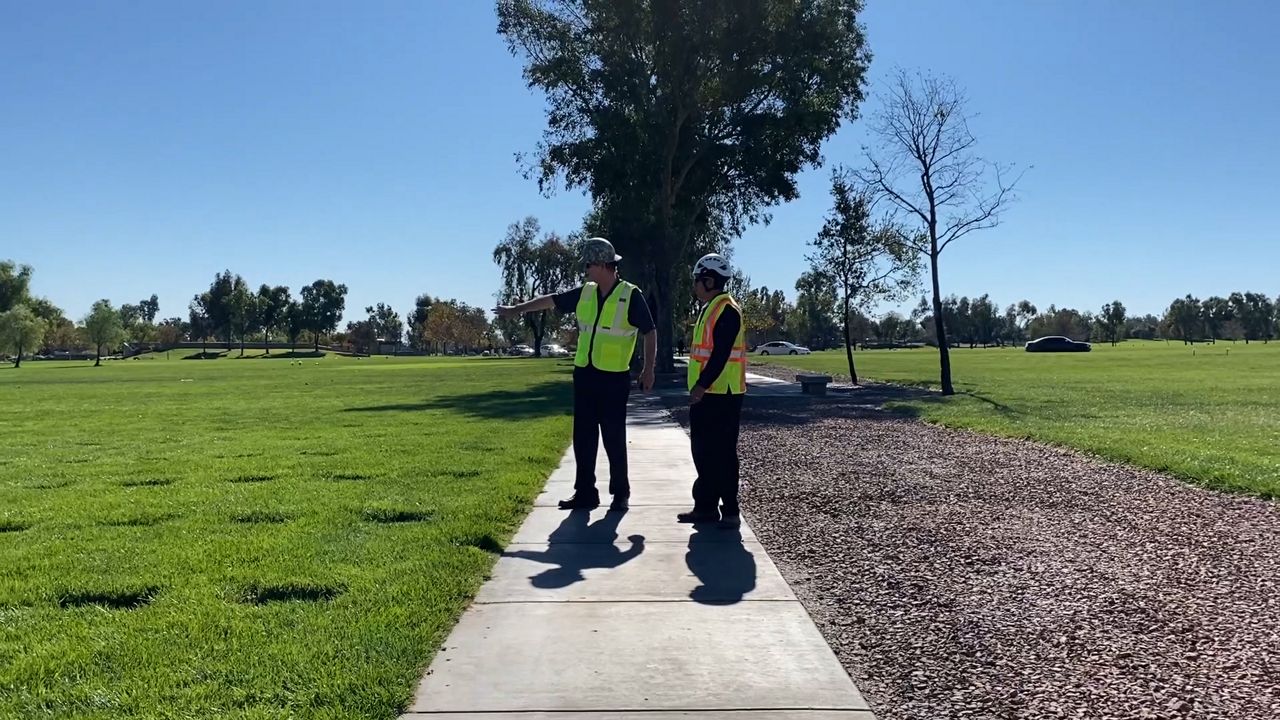 RIVERSIDE, Calif. — On a sunny, crisp fall day, William Osgood finds himself at the Riverside National Cemetery, the largest federal burial site in the western U.S., observing his team trimming several large trees on the grounds. He said taking care of the grounds is an honor for him.

“We are a veteran-first company,” he said. “We believe in veterans and doing anything we can to help veterans, whether it’s unfortunately when they pass away, but at least we are taking care of their families, allowing them to have a beautiful place to honor their fallen.”

Osgood knows the importance of honoring our country’s heroes because he is one. He served in the U.S. Marine Corps post-Vietnam War from 1975 to 1978, but he didn’t receive a hero’s welcome when he came home.

“It was not something like it is now where we do honor veterans. We recognize the service that they’ve given to keep us free. We were literally not welcome back in our own country after serving,” Osgood said. “So it was a very difficult period, but once you kind of start understanding that life goes on, you kind of start picking up the pieces.”

He eventually turned to running his own business called CFR & Associates. He offers various services, including tree trimming and landscaping for the Veterans Administration, and picked up contracts with sites including the Riverside National Cemetery and the Los Angeles National Cemetery. Osgood said veterans like himself are uniquely qualified to take on large-scale jobs.

“Veterans, by their very nature, are so mission-focused that their mission becomes the end-all, be-all of number one, being an employer, or number two, in my case, being the business owner,” he said.

But his path to running a business hasn’t been easy. Osgood is a disabled veteran business owner, and he didn’t know that allowed him to get preferences on some federal and state contracts.

“I went through the school of hard knocks,” he said. “Almost everything I learned as a business owner was because of mistakes that I’ve made and not having the availability of resources because number one, I didn’t look for them, and number two, in all honesty, I wasn’t aware of them.”

That’s what Jack Ochoa, CEO of the Veterans Chamber of Commerce, wants to change.

“According to the 2010 U.S. Census, there are 16,000 veteran businesses here in L.A. County alone,” he said. “But a lot of them don’t know that they need to register, like they don’t even know the beginning steps of registering with the federal government [so that] they can get counted.”

That led him to create the group, and now he helps veterans grow their business, typically talking to them over Zoom and pointing them to resources.

But Ochoa, a U.S. Army veteran, didn’t stop there. He is also part of the Los Angeles Unified School District Small Business Advisory Council, which he joined in 2003. Ochoa has been instrumental in encouraging the district to give more business opportunities to veteran owners, who tend to hire other vets.

“We want to help our fellow brothers and sisters who were with us side-by-side during turbulent times,” he said. “Well, guess what? We are going through turbulent times again, so why not help each other through all of this.”

LAUSD recently approved a new initiative ensuring at least 5% of all contracts are awarded to veteran-owned businesses with a slight preference for micro-businesses with fewer than five employees. The impact could potentially mean millions of dollars in job contracts.

“I literally lost my mind. I could not believe that it took us a while to get there, but now all veterans are included and welcome to do business with LAUSD,” Ochoa said.

Osgood, who also sits on the LAUSD Small Business Advisory Council, said the district’s efforts symbolize something more — a way to say thank you to veterans by supporting their businesses.

“I think if you live in the United States of America, you owe a debt of gratitude to the men and women who went before you,” he said. “Who gave us the opportunity to go out and to be able to do the very things we want to do - to work, to play, to eat in restaurants, to have the basic freedoms that we take for granted.”