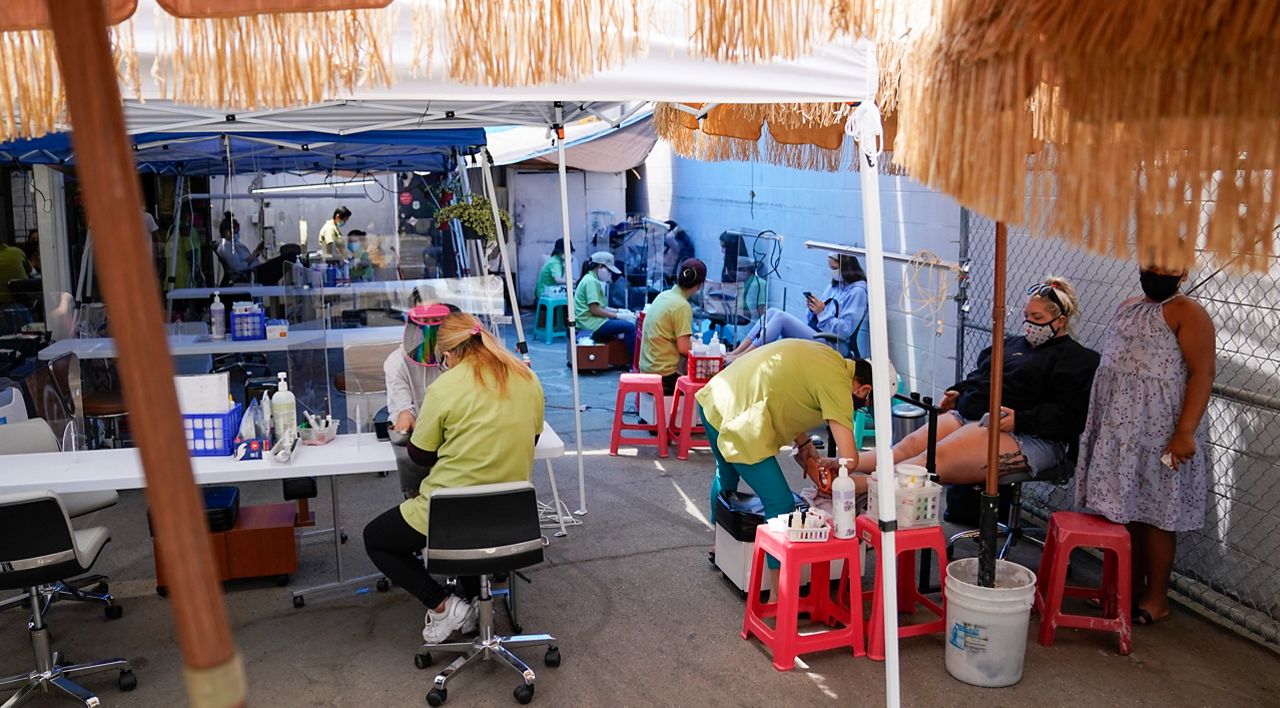 Counties will move through the system based on their rate of coronavirus cases and the percentage of positive tests. Previously, the state used several other metrics, like hospitalizations and testing capacity, to determine whether counties could reopen.

Newsom said the new system will be simple, slower and steady. It's aimed at preventing a surge in infections, like the one between Memorial Day and July 4 as the state began reopening the first time around. That prompted Newsom to shut down bars, restaurants for indoor dining and a slew of other businesses about two months ago.

After being forced to close businesses for a second time, the state is “making sure that we really hold strongly to these buffers in terms of criteria and data, and holding that criteria and data in line for an extended period of time,” Newsom said.

“We’re going to be more stubborn this time and have a mandatory wait time between moves. We didn’t do that last time,” he added.

In simple terms, the rules are about calibrating business activities with how widespread the virus is within counties. The more cases and positive tests, the tighter the restrictions on restaurants, retail shops and other businesses. For example, a county in the most restrictive tier can only open restaurants for outdoor dining. But counties in lower tiers can allow diners inside, though at reduced capacity.

Under the new process, counties will have to meet certain metrics for three weeks before they can reopen certain businesses.

NEW: California is launching a Blueprint for a Safer Economy.

Your county will be assigned a color based on:
- Case rate
- Positivity rate

Your color determines how businesses can operate in your county.

The state will now report virus statistics, such as case numbers, on a weekly basis.

In anticipation of the Democratic governor’s announcement, there was a common refrain from businesses and local governments buffeted by the outbreak: We need clarity.

Counties need to understand clearly “what thresholds to aim for and the public health data that will determine success or failure,” the California State Association of Counties said in a statement.

That was echoed by the California Restaurant Association, which has seen the state’s once-thriving food industry wither under restrictions that have left many to survive on takeout, delivery and limited outdoor seating, if they have the space. The association estimates as many as 1 million workers have been furloughed or laid off.

“Restaurants in every corner of the state are on life support right now. Every day that passes with a dining room closed, a restaurant owner is more likely to shut the doors permanently,” he said.

Riverside County Supervisor Karen Spiegel, who has recovered from the virus, said she hopes the state plan recognizes different levels of risk that come with different business activities. She’s puzzled why shoppers can fill a Costco while indoor hair salons remain off limits.

Using metrics, the state needs to change how businesses are categorized, Spiegel said. “We have to do more of a risk-based approach.”

California has the most confirmed virus cases in the nation, with nearly 700,000, and the third-most deaths — 12,550. But since the closures last month, the average number of daily cases has been falling along with the infection rate and hospitalizations, which peaked at 7,170 on July 21 and since dropped to about 4,300.

Prior to the new plan, the state had relied on a so-called county watch list.

Most of California’s 58 counties, including the most populous — Los Angeles — remained on a state monitoring list because they were above one or more of the benchmarks for cases, infection rates and hospitalizations. Inclusion on the list restricted what businesses can operate, whether schools can offer classroom instruction and limits other activities, such as attending indoor religious services.

But as the state’s coronavirus data has improved in recent weeks, some counties got off the list, including San Diego and Orange, the second- and third-largest counties by population.

For most people, the new coronavirus causes mild or moderate symptoms, such as fever and cough that clear up in two to three weeks. For some, especially older adults and people with existing health problems, it can cause more severe illness, including pneumonia and death.