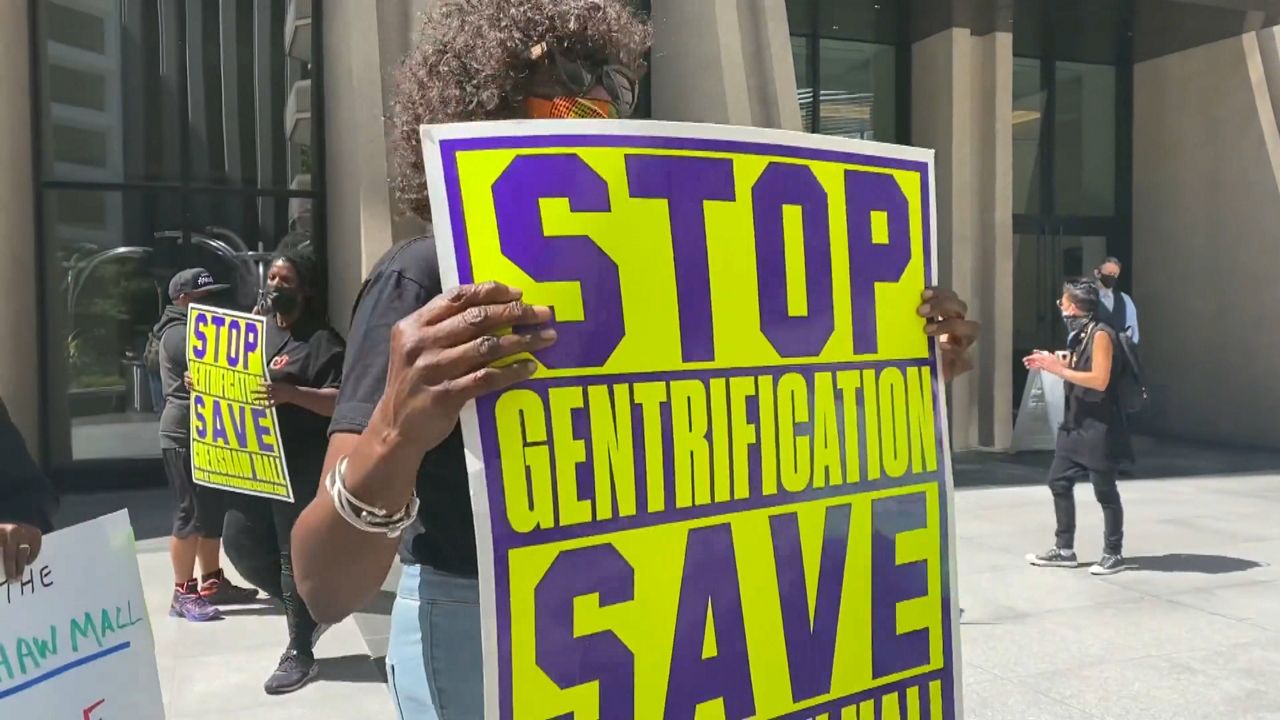 LOS ANGELES — The Baldwin Hills Crenshaw Plaza was one of the first regional shopping centers in the United States.

It's also known as the center of commerce for South LA.

Over time, the historic landmark has had several owners, now it's up for sale again, and South LA residents are worried about gentrification displacing Black businesses.

Since 1994, Malik Muhammad has operated Malik Books in the Baldwin Hills Crenshaw Plaza, a store he opened to highlight Black literature.

"We deserve to have literature, books and cultural and diverse materials that speak to our voice and our people," Muhammad said.

Over the decades, Malik Books withstood the evolution of the mall.

Stores have come and gone, and so have owners, but what Muhammad said has remained consistent is the mall's value to the community.

"This is more than just a mall. It's a cultural hub," he said. "In this location here, we have a voice."

Now that the Baldwin Hills Crenshaw Plaza is back on the market, it's brought Muhammad and his business tremendous uncertainty this time around.

So much so, he took proactive measures by opening a second location in the Westfield Culver City mall.

DCR is a group of longtime South LA residents leading an effort to buy the Baldwin Hills Crenshaw Plaza and retain community ownership.

Okuk and Goodman both share timeless memories associated with the landmark.

Most of Okuk's childhood was spent there, and Goodmon's family legacy in the Crenshaw community dates back over a hundred years.

"It's really about facing gentrification," Goodmon said. "We're coming together to assert that Crenshaw will be a Black space."

DCR said they have more than $75-million in collaborative and philanthropic donations and investments and believed they placed the highest offer to DWS, the current owners of the mall.

However, DCR said their offer was rejected and claimed DWS allegedly accepted a lower offer from a Century City-based Harridge Development Group.

In response, DCR has protested on the grounds outside Harridge's office with messages discouraging them from buying the mall.

Okuk and Goodmon believe the deal between Harridge and DWS was a racially motivated plan to develop the 40-acre mall into luxury housing and displace the Black community.

"It feels incredibly dismissive that we would come with a professional and well-capitalized team, not to mention thousands of community members and organizations coming out to support," Okuk said. "And yet DWS wouldn't accept our call or bid."

DWS responded to these claims in a statement saying, "DWS has conducted a thorough and fair bidding process and has engaged diligently and constructively with community leaders about the purchase of Baldwin Hills Crenshaw Plaza."

In Muhammad's experience, he said business owners like himself are typically the last to know when the mall is sold.

"Whoever ends up owning this mall, Malik Book's wants to be part of the new development," Muhammad said.

That way, he can leave a legacy to contribute to the next generation.

CORRECTION: An earlier version of this story misidentified the current owners of the mall. It's DWS. This has been corrected. (June 10, 2021)