To Anaheim and Beyond: Disney Lays Groundwork for Major Expansion of Disneyland Resort

ANAHEIM, Calif. — The Walt Disney Co. has bold plans for the future of the Disneyland Resort.

Dubbed Disneyland Forward, Disney is looking to modify its current agreement with the city that would allow them to create a new entertainment and destination offerings within the 500-acre Disneyland property in Anaheim.

A Disney official said this new Disney destination "could bring together theme park experiences, hotels, and retail, dining and entertainment in a unique way that would serve guests, conventioneers, and locals."

Another part of the plan could see Disneyland, Disney California Adventure, and Downtown Disney expanded on the Disneyland Resort's westside. Most of that area is currently being used as a surface parking lot.

On the east side, Disney would build a new parking destination and a new pedestrian bridge with access to Harbor Boulevard hotels and businesses.

"We need this space and land to create story-rich experiences," said Jeanette Lomboy, a Disney portfolio executive from Walt Disney Imagineering, in a conference call Thursday with reporters. 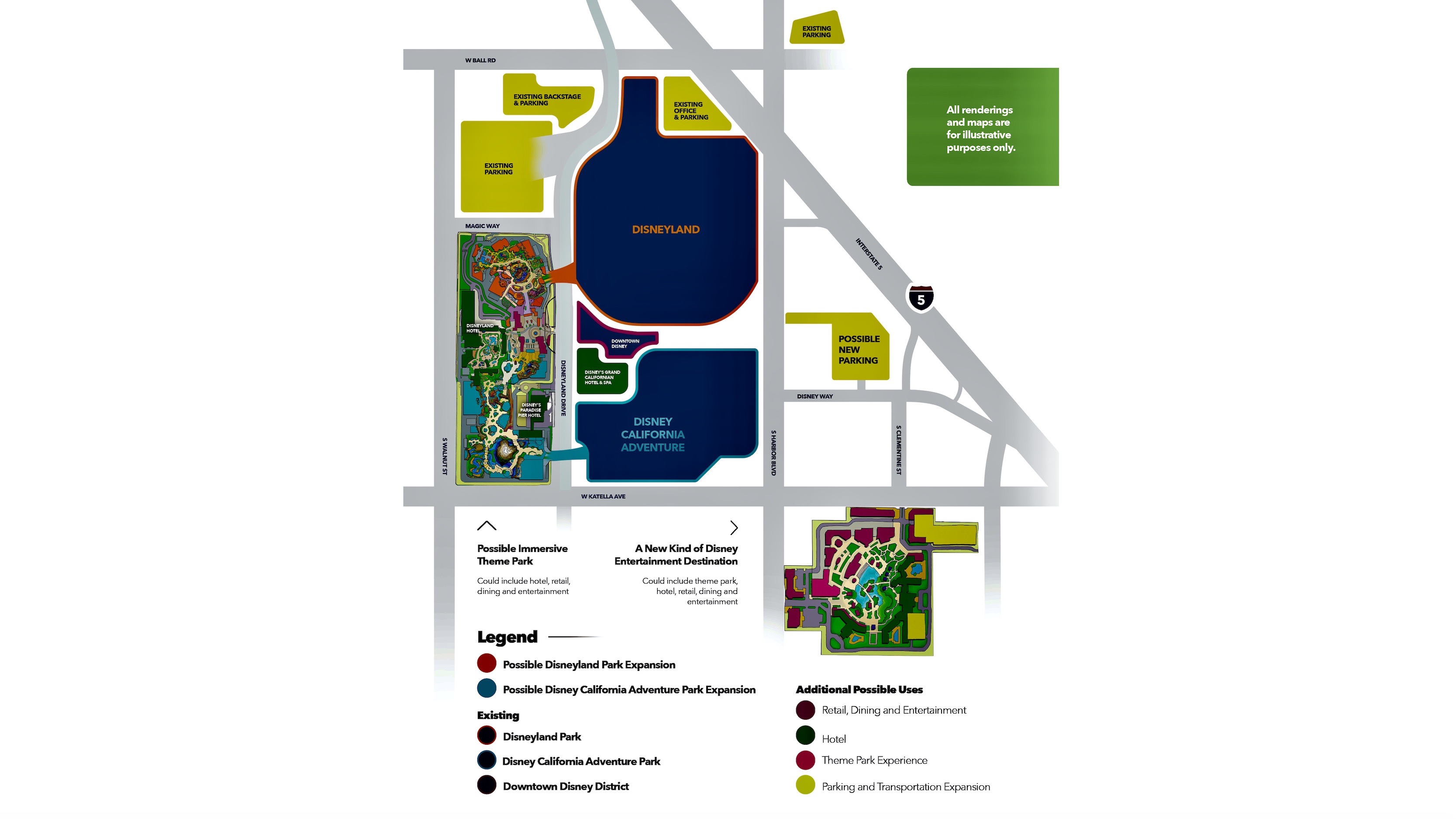 Adopted in 1993, the Disneyland Resort Specific Plan was an agreement between Anaheim and Disney that laid out the foundation of the Disneyland Resort. The original master plan agreement allowed for developing a second theme park, which eventually became Disney California Adventure, hotels, parking facilities, and transportation system, among other things.

The plan gave birth to Disney California Adventure, the Downtown Disney retail and dining strip, the Disney Grand Californian Hotel & Spa, and other landscaping, signage and infrastructure in and around the Anaheim Resort District.

However, the plan is outdated, Disney officials said.

The original master plan separated each asset class into unique districts. For example, if Disney wanted to build a hotel, they would need to do so in the hotel district; any new theme park entertainment has to be made in the theme park district, parking in a parking district, etc.

"Guests need and want more," Lomboy said. "To give guests what they want, we need greater flexibility here in Anaheim. Guests are demanding immersive, integrated experiences that are not singular in their uses. We no longer look at uses as separate. Retail, dining, entertainment theme park and hotels are all part of the same experiences at the same place."

Disney officials emphasized that they plan to work with the community and local businesses without seeking any public money for these developments.

The announcement comes amid the coronavirus pandemic, which has upended the city's finances due to the state government shutdown of the city's economic engines, including the Anaheim Convention Center, Disneyland, Los Angeles Angels baseball, Anaheim Ducks hockey, and the Honda Center.

The Anaheim City Council recently approved the borrowing of more than $200 million to cover the shortfall created by the pandemic.

"In the past year, we have seen what the Disneyland Resort means to Anaheim's economy and the role it plays in helping us provide vital public services for our residents, neighborhoods and businesses," Sidhu said in a statement. "I welcome fresh thinking about how the Disneyland Resort evolves and how we best maximize this resource for our city."​

Disney joins the owner of the Los Angeles Angels and the Anaheim Ducks owner, who are both in the process of creating mega mixed-use projects in the city.

The Ducks are planning to invest $3 billion in a new mixed-use retail and entertainment destination anchored by the Honda Center.

The Los Angeles Angels are also planning to build a mixed-use multi-billion dollar development anchored by Angel Stadium in the Platinum Triangle area of the city.

After more than a year of Disneyland and Disney California Adventure being shut down because of the pandemic, Disney officials said this is the time to do this kind of expansion project.

Disney officials said they plan to reach out to the neighboring community and nearby businesses to inform them of their plans.


"Now is the right time for us to do this," a Disney official said. "We've been thinking about this for a while. As we come off the year that we just had, I think the bullishness that we have in Anaheim, we want to continue to invest, and in order to do so, we have got to lay the groundwork now for that to happen later."

EDITOR'S NOTE: This story has been updated to include data on Disneyland Resort's permitted zoning as well as additional context and reporting. (March 25, 2021)