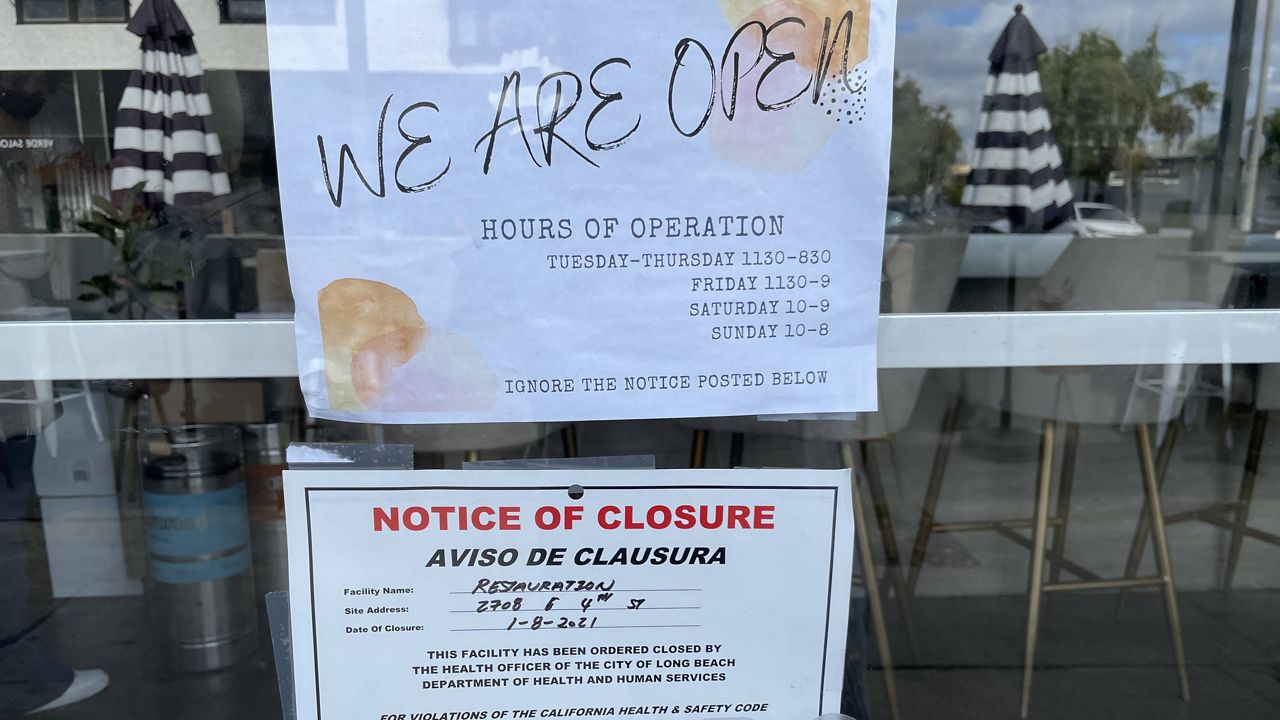 It was business as usual at the 4th Street restaurant in Long Beach, but there was one exception: The restaurant was open to outdoor dining weeks, and even months, before the stay-at-home-order and outdoor dining ban in Southern California were lifted.


Tanner said that after shutting down to customers twice in the last year, she continued to remain open in November because it was her only option.

"Obviously, I’m doing it to pay my bills, but I’m doing it because [my employees] need help," she said. "I’m not going to do that again for the third time, so I chose not to.”

She and her business have become a figurehead of sorts of the last few months — synonymous with other businesses that have chosen to openly defy Long Beach's health orders by staying open.

In November, Long Beach — which is part of Los Angeles County — issued an outdoor dining ban to curb the spread of the coronavirus. Some business owners, like Tanner, felt that restaurants were unfairly targeted.

"I couldn’t do it anymore," she said. "I was super angry about the whole situation. There was just no data to show that this is not a safe place to be. It was not about getting rent relief; it is about the payroll and taking care of these people, and making sure their livelihood is also protected,” she said.

Ten days after shutting down, Tanner chose to reopen her patio. Restauration was able to operate largely under the radar, bring back in its employees, and seat customers outdoors. However, after hosting a small New Year's Eve dinner, the restaurant began to gain notoriety.

The City of Long Beach started cracking down, at first issuing citations. Slowly over the next three weeks, Tanner also saw her health permit revoked, her gas service shut off, and now she faces a looming criminal case.

Yet through it all, Tanner has not shut down.

"I knew if I was going to do this, I just had to continue my path," she said. "I know I’m not breaking any laws, and I know if the city wants to take me to court, I feel confident that the law is on my side because it’s unconstitutional.”

Now that the stay-at-home order has been lifted, Long Beach restaurants are able to reopen for outdoor service. In a statement, city spokesperson Kevin Lee said they will continue to evaluate and pursue enforcement measures. It reads:

"The announcement from the State regarding the lifting of the Regional Stay at Home Order does not effect the City’s decision to turn off the gas at Restauration. The restaurant was in clear violation of the health order and the action was warranted after various attempts were made to gain compliance from the restaurant."

Tanner now faces possible eviction and a long journey ahead, and yet through it all, she does not regret her decision.

“I’m just trying to continue business as usual," she said. "I just want to stop fighting with the city over running my business and get back to running it at this point.”

For her it is a matter of survival — for her own livelihood, that of her employees, and the business as a whole.