ANAHEIM, Calif. — Trader Sam is out. The other Indigenous natives that once inhabited the Jungle Cruise attraction at Disneyland and Walt Disney World are gone, too.

But new scenes and a new crop of diverse and inclusive adventurers have set up camp.

One of Disneyland's original and most iconic rides, Jungle Cruise has received a makeover just in time for its 66th birthday.

The next time visitors hop aboard the boat tour ride through an artificial river, they'll see some of the same animatronic animals that wade in the water and experience new characters with backstories and scenes, and hear old and new corny jokes from the skipper.

The Jungle Cruise ride at Disneyland will reopen to the public on July 16. An enhanced version of the ride at Walt Disney World will come out sometime this summer.

"I'm quite confident that this has all the heart, all the humor, even some new humor that it is noted for," said Ken Potrock, the president of Disneyland Resort, during a media preview of the attraction Friday morning.

"This is such an important attraction to us," Potrock said. "It is one of the original attractions from opening day. [It's one of] Walt's attractions. It will be 66 years old in a few days. We're very excited about this iconic attraction." 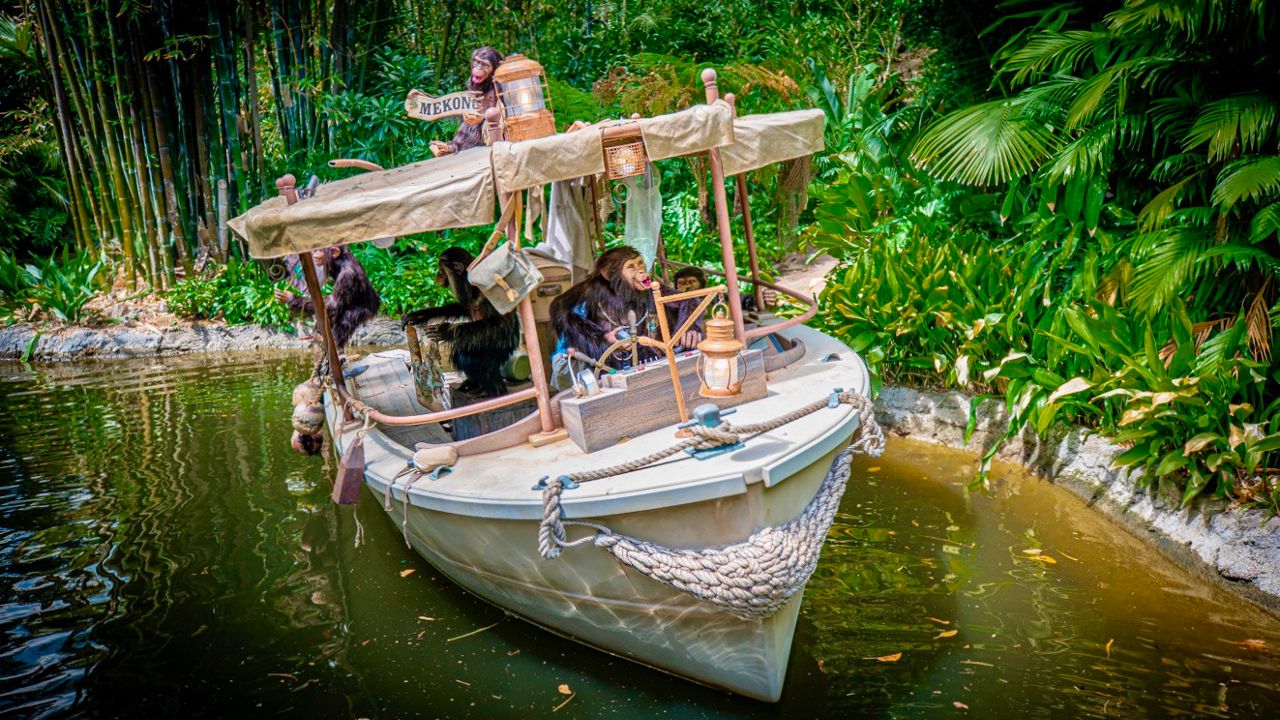 The newly remodeled attractions come as the Walt Disney Co. prepares to showcase a movie inspired by the river ride. The "Jungle Cruise" movie stars Dwayne Johnson and Emily Blunt and is set to hit theaters later this month.

There won't be any "Rock" sightings or anything from the movie on the actual Jungle Cruise ride.

However, the queue inside the attraction's boathouse will feature several Easter eggs from the movie, said Kim Irvine, director of concept design at Walt Disney Imagineering.

Irvine said a map, blouse and skipper jacket from the movie are showcased inside one of the offices in the boathouse.

"It was really hard to work them ["Jungle Cruise" movie actors] into the story on the jungle [cruise ride] because that had already been established," Irvine said. "But if you go through the boathouse after you see the movie, you'll see lots of things in there that we took from the film story."

Jungle Cruise is a roughly 7.5-minute boat ride that tours riders through a manufactured river with animatronic animals and figures. A witty skipper guides the boat and spews a tongue-in-cheek narrative, corny jokes and bad puns about the animatronic animals, scenes and jungle landscape.

Some of the jokes

As visitors board the boat, the skipper quips, "I hope you all know what you're getting yourself into — it's called a boat."

As the journey embarks, the skipper would point to an animatronic tiger and joke, "The Indo-Chinese tiger can jump over 20 feet. But don't worry, we're only 15 feet away. He'll just jump right on over us — just like my jokes."

Changes over the years

The Jungle Cruise attraction made its debut in 1955 when Disneyland first opened. Walt Disney wanted his visitors to experience the different rivers around the world with real animals, although that was scrapped in favor of animatronic versions of them.

Back then, a skipper's spiel was more serious, almost like a narrator narrating a nature documentary. But visitors found it boring, and later on, Disney made it more entertaining. Disney brought in a staff member to make the script more lighthearted.

The ride has gone through several changes since opening in 1955. Over the years, additions have included the elephant bathing pool, gorillas in the safari camp and a new piranha scene, Disney officials said. 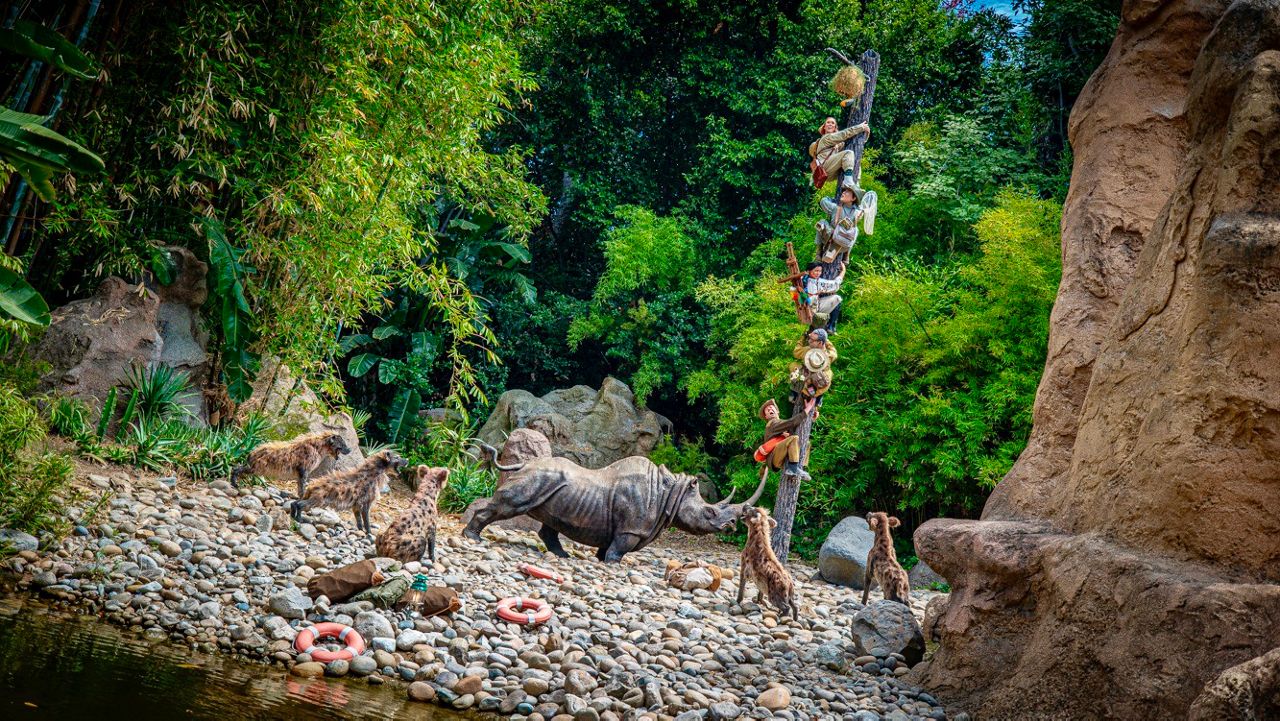 This time around, Disney made more changes that highlight today's cultural emphasis on "diversity and inclusion."

Gone are the dancing and hunting animatronic Indigenous natives and Trader Sam, the shrunken head dealer, that riders encounter during the boat tour.

The native male explorers who climbed up a totem pole to escape a rhinoceros and hungry hyenas are also gone.

Some critics had considered the natives' scene as stereotypical and depicted Indigenous people negatively.

"Disney Imagineers have a longstanding history of updating attractions, expanding on stories and adding new magic to keep experiences fresh and relevant," said a Walt Disney Imagineering statement to Spectrum News addressing the removal of the animatronic natives.

"When doing so, we want all guests to feel welcomed. We're constantly looking to ensure more accurate representation of the people and cultures in our stories, and we're looking at how to enhance the story. How can we make it better than it is today?" the statement read.

The new backstory features a new crop of adventurers and explorers of diverse backgrounds.

It starts with Alberta Falls, the granddaughter of Dr. Albert Falls, who now heads the Jungle Navigation Company Ltd. and offers tours of the river. Disney officials said that Alberta's mother is a renowned artist from India and her father is a British scholar.

The new explorers (the ones visitors will see on the totem pole) each have a unique background and come from different parts of the world. One is from Mexico. Another is from Ireland. One more is from Japan.

As the Jungle Cruise ride backstory goes, their ship is found wrecked in the river, and now they are fleeing the animals in the jungle.

Additionally, Alberta has teamed up with Trader Sam and turned his former head-shrinking business into a gift shop filled with lost and found items found on the river. 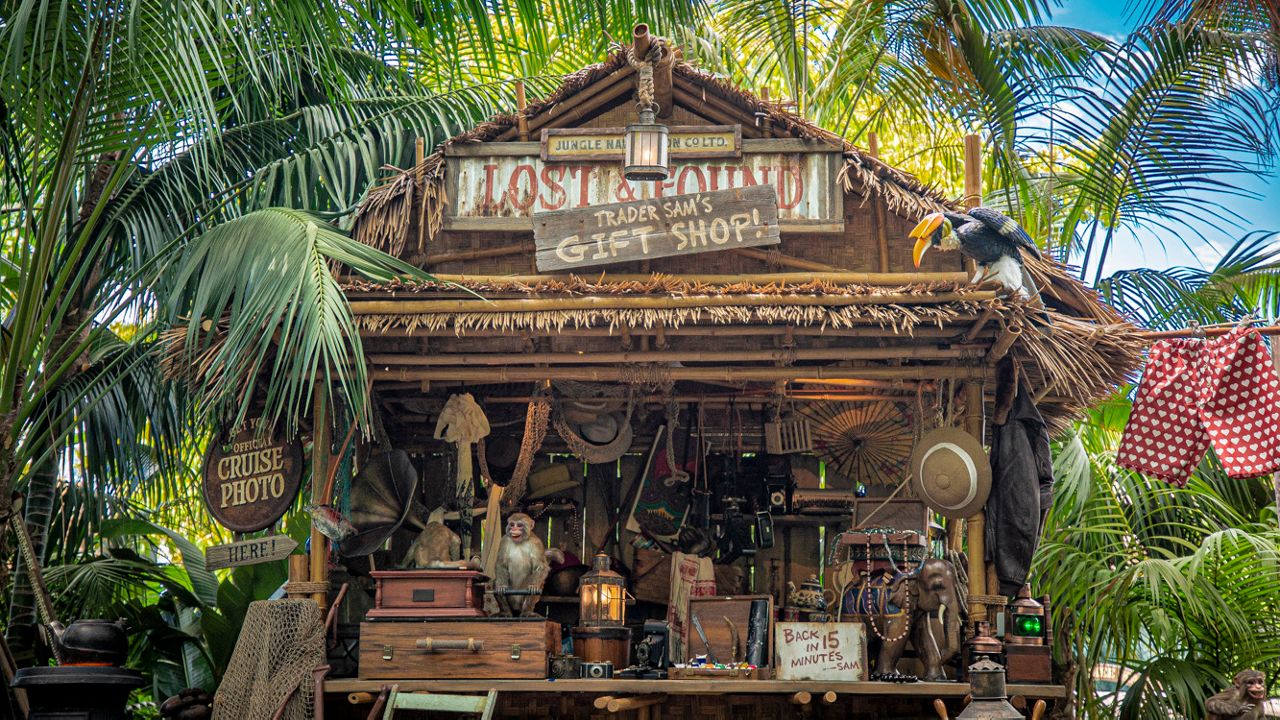 Irvine, the director at Walt Disney Imagineering, said they are currently coaching the skippers with new material to include in their spiel that highlights the newly updated scenes.

And Disney is not done.

More additions are coming and will continue to come to the Jungle Cruise attraction, Irvine said.

"We want, when guests come to the park, not to just see the same ride over and over again," Irvine said. "It's always fun to see the discovery of something new."