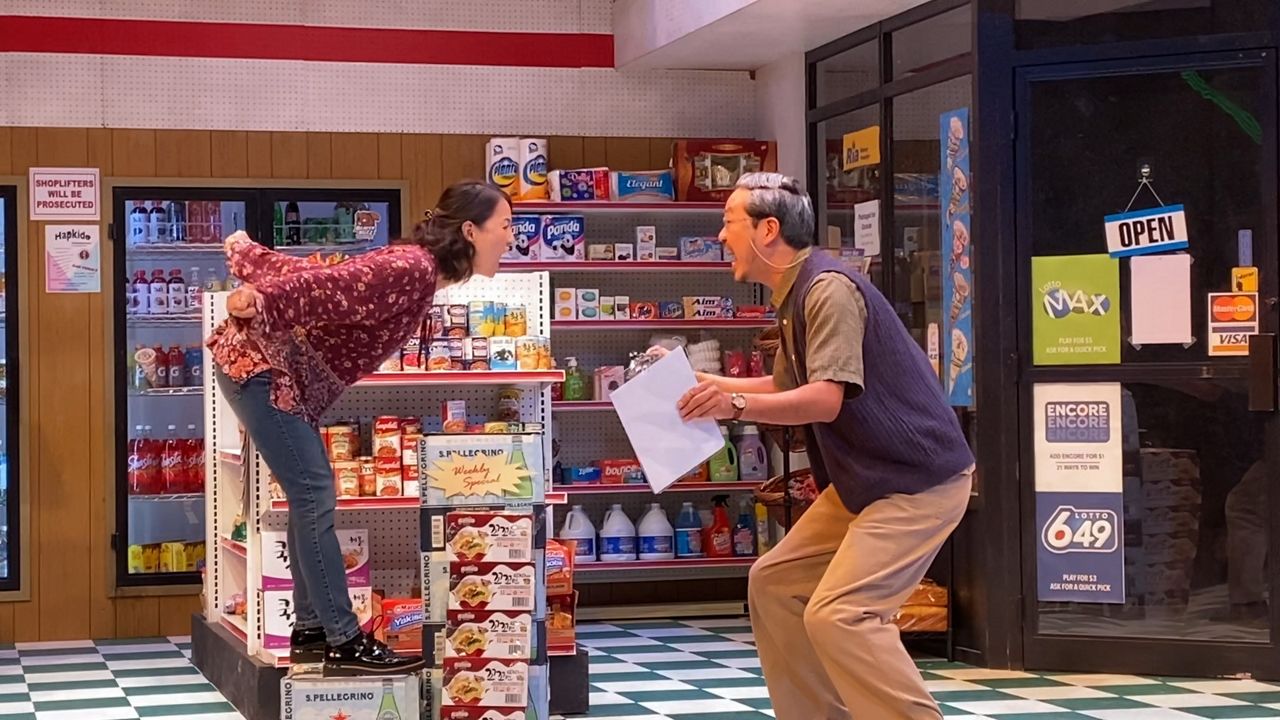 At Laguna Playhouse, ‘Kim’s Convenience’ is stocked with laughs and love

LAGUNA BEACH, Calif. — You may know the show “Kim’s Convenience” from Netflix where you can binge watch five seasons of the Canadian sitcom, but before it appeared on CBC, it was an award-winning play by Ins Choi.

“What is story of Mr. Kim?,” the title character muses as he considers his legacy and the fate of the store he opened long ago in downtown Toronto.

Choi’s play is an immigrant story, a story about family and a story full of heart. For the first time, the play is being presented in California, at Laguna Playhouse where Yong Kim plays the titular Mr. Kim — no relation, he jokes.

“My entire family was fans of the TV show,” he admitted. “I was surprised it was based on a play that was preexisting.”

Based on, but not entirely the same. The TV show, which Choi adapted from his original play, is a sitcom in the classic sense, playing for laughs. The stage play, however, dives deeper into the dynamics of the Kim family.

“The play has a good mix of comedy and drama,” Kim said. “Any fan of the TV would appreciate the differences but also similarities.”

As the son of Korean diplomats, the actor has more differences than similarities with the character he plays. Appa’s immigrant experience, Kim said, actually resembles that of his wife’s family in Milwaukee.

His co-star Susane Lee, however, feels a certain kinship to her character Janet, Appa’s daughter, who longs to find her own path and pursue a creative career as a photographer.

“It does touch very close to the heart,” she said. “There was a struggle for me to really let my family know that I was going to pursue acting, so there is a very strong connection there.”

Most of her family went “the medical route,” she joked, so she understands Janet’s need to forge her own way.

In the show, Janet and Appa have a complex relationship — sparring over her life choices, her relationships and her role in the family’s future store, something she wants no part of. But despite their yelling and frustration with one another, the heart of this story is actually the very big heart at its core.

“So much love,” Lee said of the father-daughter relationship. “You know, I think that’s why they come to heads at times. But it’s all rooted in a deep love for each other.”

Lee sees “Kim’s Convenience” as a story that’s both widely relatable and very specific to the Korean immigrant experience. It was very important to everyone involved that they got that last part right. The United States is home to the largest population of South Koreans outside of the Korean peninsula. According to the Migration Policy Institute, of the million or so Korean immigrants living in the U.S., roughly 30% live in California.

“Given that it’s the first time the play is being put up in California, which is the home of the largest Korean population in North America,” Kim explained, “it is our job to make it culturaly accurate.”

And specifically, his job. Besides acting, Kim also served as cultural consultant, literally donning a different hat — a white cap — when acting in this second role. His focus on accuracy started with the auditions, when director Jon Lawrence Rivera wanted him to make sure that the Korean language dialogue spoken by Umma and Appa was solid.

The white cap was necessary, he said, because filling two roles — one on stage and one off — can get complicated, especially when an actor is weighing in on aspects of another actor’s portrayal. It was a delicate dance, but ultimately he thinks the cast mastered the steps and the show is better for it.

Kim said it speaks volumes about the creative team that they were willing to hire a cultural consultant, and although this is his first time wearing that literal hat, he hopes the practice of having a cultural consultant on hand becomes more widely used when the subject deals with a specific population or culture.

He hopes the result of the show is that audiences come away with a better understanding of the Korean immigrant community that lives all around them. He’d like them to see similarities between the experience of the characters on stage and their own. But bottom line, Kim just wants them to be entertained. As he put it, “rejuvenated in terms of their will to come back to theater after everything we’ve been through.”

He does not take it for granted that theaters are once again open for business. At the end of the show, when he flips the closed sign that hangs in the door, he knows it’s only until the next curtain.