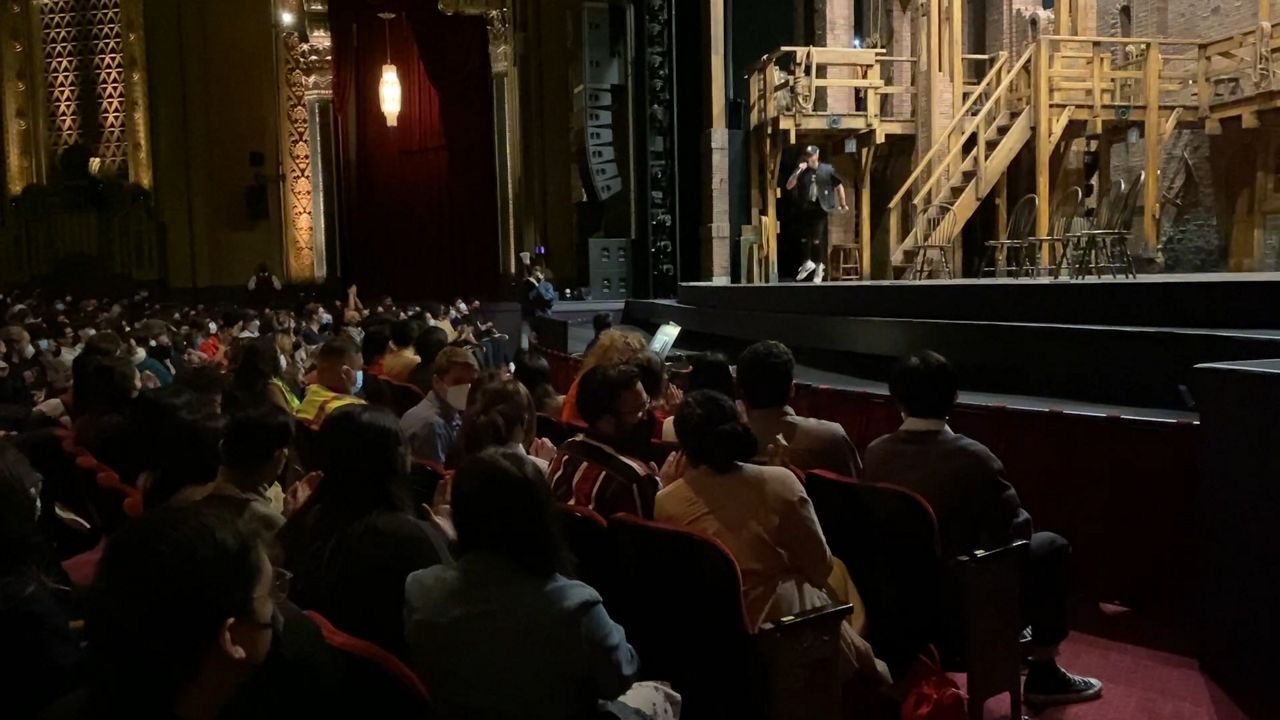 “The light fixtures are everything,” she gushed to her friend Alyssa Pham, who is a huge fan of the musical "Hamilton."


Alyssa, Audrey and another friend, Alyssa Park, are students at Grover Cleveland Charter High School, where the trio participated in the Hamilton Education Program, commonly referred to as EduHam. Students across the country get access to some of the same materials Lin Manuel Miranda used when he was researching and writing the blockbuster musical.

“I want to help you do something similar,” Miranda said in a video message, encouraging them to find a story of a historical character that moves them and to tell it in their own unique way.

This year, Principal Cindy Duong took it one step further.

“We wanted to focus on people of color,” she said. “While 'Hamilton' does tell the story in a different manner, and the cast is a diverse cast, the story is still primarily our typical founding fathers. So one of the things that we wanted to do in the projects this year was to highlight people of color of the times.”

The girls chose Phyllis Wheatley, with Alyssa writing and composing an original song for the trio to perform.

“So we talk about how she first went from Africa to America on a slave ship,” Alyssa said. “And then she began writing at a young age. She wrote letters to George Washington. She wrote poems about freedom and about her African heritage.”

The EduHam program culminates with thousands of students from across Los Angeles getting ushered into the room where it happens, which on Feb. 9 also happened to be the cast’s first public performance in six weeks.

After finally opening in August 2021, 17 months after their originally planned opening date, the show was forced to close again on Christmas Eve because of breakthrough omicron cases.

“Feel that energy,” General Manager Jeff Loeb said as he stood in a doorway looking over the audience. “It’s unbelievable.”

“We couldn’t be more excited to be here to feel the tremendous energy of these Title I LAUSD high school students who are in this building because they put something of themselves into creating a performance piece,” Loeb said, referring to the students’ video projects. "And I think that’s not something you can replicate often."

The group of roughly 2,600 students, who he referred to as artists, were the first of two EduHam audiences being ushered into the Pantages this month. In total, 5,200 area students from dozens of different high schools will have seen the show this month.

Duong says many of them may never have seen live theater before, and taking them to see a show that features a diverse cast is particularly important to her.

“To see people who look like them, that’s vital,” she said, “Whether it’s the musical stage, whether it’s the science field, whether it’s the mathematical field, it matters that there is representation. Students need to see that so they can aspire to so much more than what is typically out there for them.”


Following the performance, the students also had a chance to hear from the cast during a question-and-answer session that addressed everything from life backstage to the role of a swing to their thoughts on civic responsibility.

Unsurprisingly, Alyssa and her friends, who said they sang the score on the bus all the way from Encino to Hollywood, gave the show an A+.

“There were a lot of parts where I was on the edge of my seat,” Alyssa said.

The girls applauded the EduHam program for being a revolutionary way of learning and came away from the experience satisfied with the way they were able to tell Phyllis Wheatley’s story.