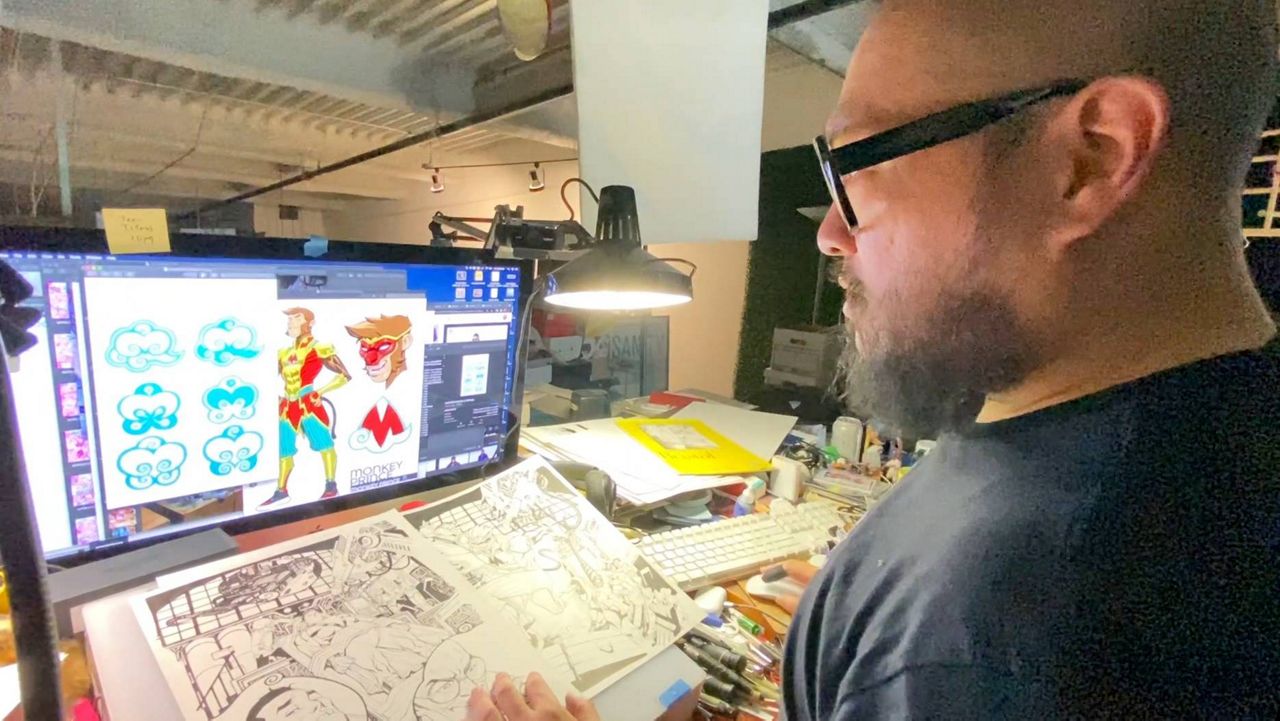 "Festival of Heroes" is a celebration of Asian and Asian American superheroes from the DC universe.


It started with Japanese manga and the Chinese comic, "Old Master Q." When Chang was six years old, his family emigrated to the U.S. from Taiwan. He remembers spending a lot of time in front of a comic book rack at the grocery store while his mom did the shopping.

“I would just sit down on one of these racks, going through one stack,” he remembered. “Next week I’d read the next stack. By the time I got through all four, that’s the month and new comics would come out again.”

While some parents may not appreciate the value of reading comics, for Chang this was very much an educational experience.

“It helped me learn English,” he said. “It helped me kind of understand America — you know truth, justice and the American way.”

The books also illustrated something else.

Flipping through the pages, Chang did not see himself in the stories. He said, if there were Asian characters, they were Kung Fu fighters, which only reflected on particular experience and certainly not his own.

“I’m not a martial artist. I play basketball,” he said and he knew that he wanted to counter this stereotypical portrayal. “I always said to myself, if I had the opportunity to come up with my own characters and to also influence the projects I work on, I should do that.”

That opportunity came sooner than he expected.

It was the early 1990’s and Chang was just 20, still in college studying architecture, when Bob Layton offered him a fill-in assignment at Valiant Comics. Before the project was even completed, Layton approached him about starting a whole new series.

This was the moment our hero realized his destiny.

“The Second Life of Dr. Mirage,” and a new career were born.

Now, almost 30 years later, Chang is having another moment that seems fated.

“This is the son of Monkey King,” Bernard explained.

Noticing Chang’s interest in comics, his father decided to read him “Journey to the West” at bedtime. The Monkey King — who he described as a 16th Century Chinese superhero, fascinated him.

“I’d go to sleep and I would dream about this wondrous world, all these mystical lands, these mystical creatures, their superpowers,” he said. “It became a good balance between American superheroes and this kind of Chinese mythology.”

In creating the Monkey Prince, Chang and his team had to find that same balance, remaining true to the original myth, but also integrating this new character seamlessly into the DC universe.

“The superpowers he would have, adventures he would go on, what would be his style?” the self-described sneakerhead said, adding with a sly smile. “Oh and I also threw some basketball sneakers on him because what teenager wouldn’t want to rock some really cook kicks.”

Chang said he connects with all his characters, emulating their facial expressions as he sketches. However, his connection to this newest character is deeply personal. His parents divorced when he was young, before his father reached the end of the book.

“We were getting toward the end and we moved,” he said. “I just never finished reading it so this project is kind of me tying up those lose ends.”

Carrying the story forward, he hopes this character and this anthology will reach those kids who, like him, have been pouring over the panels looking for a story that resembles their own.

“To say, you know, we’re no longer guests. We belong here. This is our home now. We’re a part of the American dream,” Chang explained.

He said the key is to bring authentic stories, created from the heart and rooted in personal experience.

“We live in a colorful world,” he said, “and our stories should reflect that.”