LOS ANGELES — Holding signs that read “housing not punishment” and “being houseless is not a crime,” hundreds of people protested outside of Los Angeles City Hall Wednesday morning ahead of a City Council vote to adopt a controversial anti-camping ordinance.

If adopted, the law would restrict sleeping and homeless encampments in certain areas of the city, including within 500 feet of schools, day care facilities, parks and libraries.

“We know what the ordinance says,” LA Community Action Network spokesperson George Herod told the crowd gathered on the City Hall steps holding signs, beating drums and encouraging drivers-by to honk their car horns in support. “It’s just another attack that will criminalize the homeless population.”

Proposed last month by Council members Paul Krekorian and Mark Ridley-Thomas, the ordinance would replace Section 41.18 of the LA Municipal Code to specify particular times and locations where it would be illegal for a person to sit, lie or sleep or to store, use, maintain or place personal property in the public right of way. 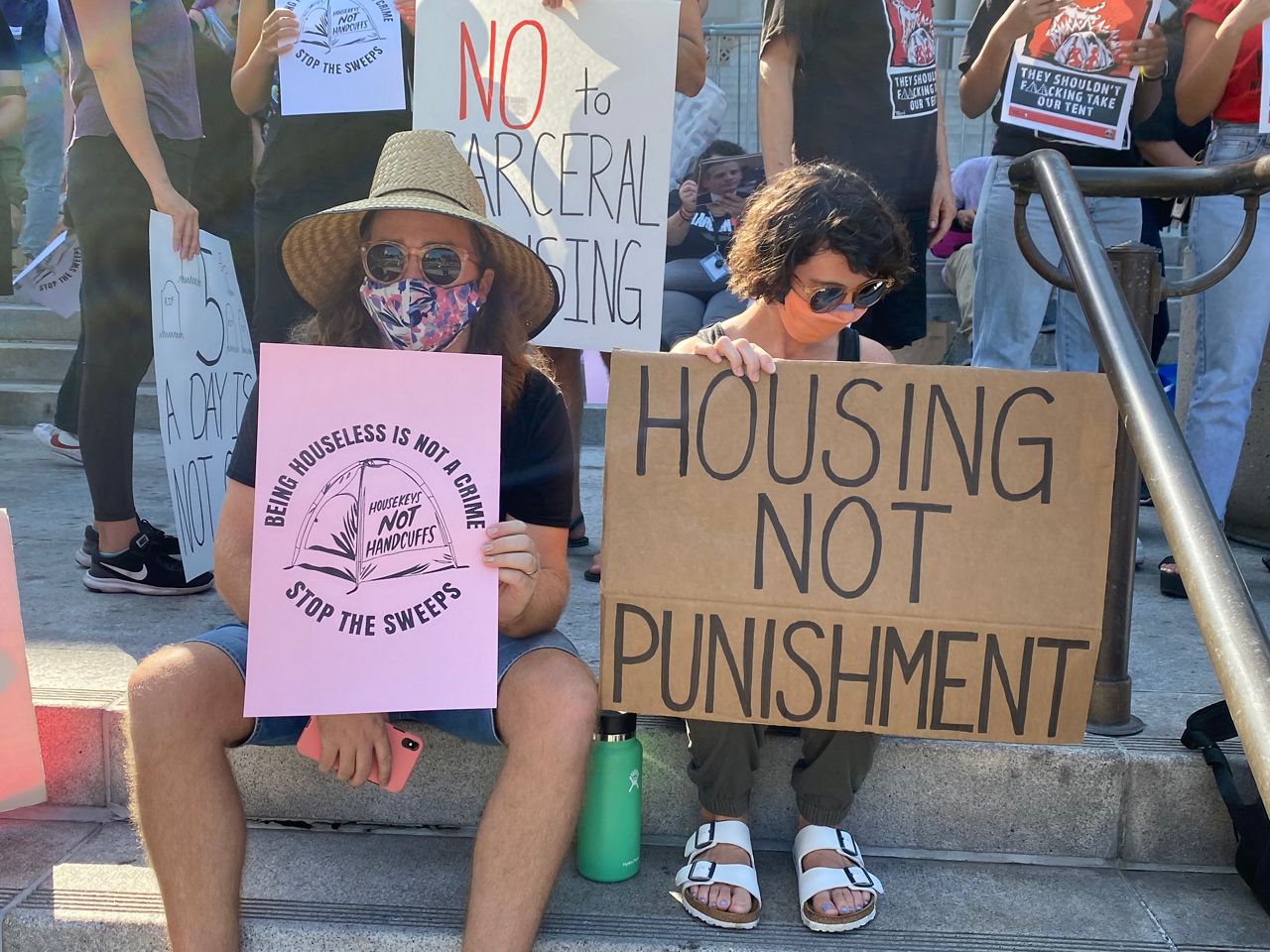 Thirteen of the council’s 15 members voted to approve the ordinance earlier this month. Councilman Mike Bonin and Councilwoman Nithya Raman dissented, preventing the ordinance from the necessary unanimous approval it needed for adoption upon first consideration. It now needs only eight votes to pass.

“You’re creating a problem because you’re going to be arresting a lot more homeless people,” said Michael Lindley, a Venice resident since 1969 who serves on the board of Venice Community Housing. “The idea is they’re trying to keep the homeless people moving all the time. That's impossible. They get tired. They’re carrying their stuff. They need places to live and stay, and they don’t have it.”

Like many people at Wednesday’s Right to Rest Without Arrest Rally, some of whom are currently without a home or have experienced homelessness in the past, Lindley fears he could lose the roof over his head at any time. As a renter in a neighborhood where the median home value is $1.8 million, he fears his landlord will sell.

“I’ve been there for a long time, but that could happen any day,” he said. 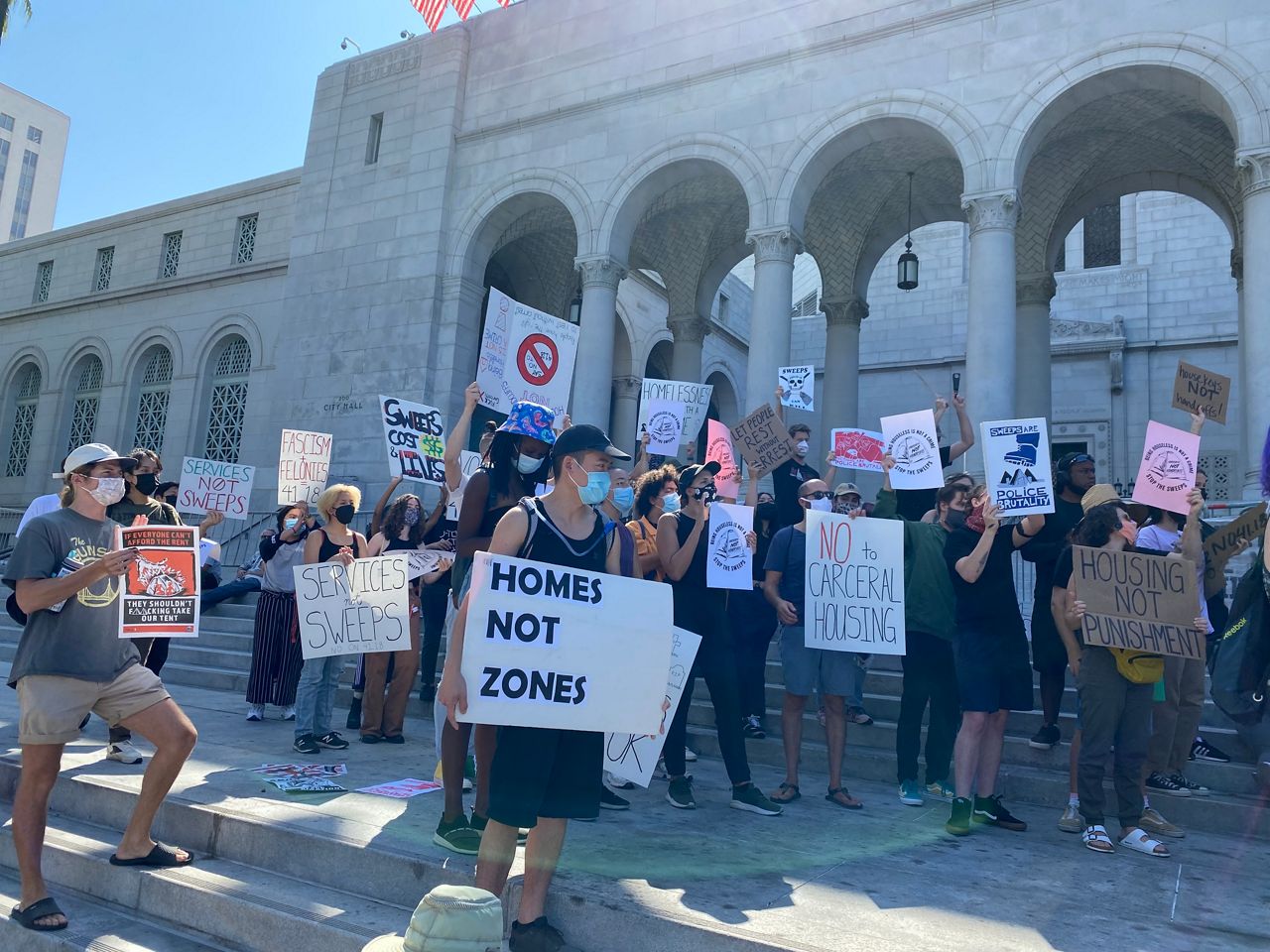 According to the last unsheltered count by the LA Homeless Services Authority, 41,000 people in 2020 were experiencing homelessness in the city of LA. The city only has enough beds to shelter 39% of its homeless population, LAHSA says.


“I’m here to demand housing for the unhoused. It’s the social issue of our time,” said Chris Venn, a retiree who works with the group San Pedro Neighbors for Peace and Justice, which is part of a larger coalition called Services Not Sweeps.

"This is a particularly important day because the city council is just relinquishing any kind of responsibility for the situation they created. Policing isn’t the solution. Policing is the problem," said Venn Holding while holding a sign that read, "We need housing not punishment."

City Council, however, sees it differently.

"This ordinance, first of all, does not make homelessness illegal. It does not criminalize homelessness,” Krekorian said earlier this month. “It does not make any conduct that is fundamental to being human illegal. What it does do is it guarantees that we will reestablish passable sidewalks. It protects the users of our public infrastructure and the unhoused residents of our city from being put into positions of interaction with automobiles, around loading docks, driveways and so forth. It guarantees access to our fire hydrants, entrances to buildings."