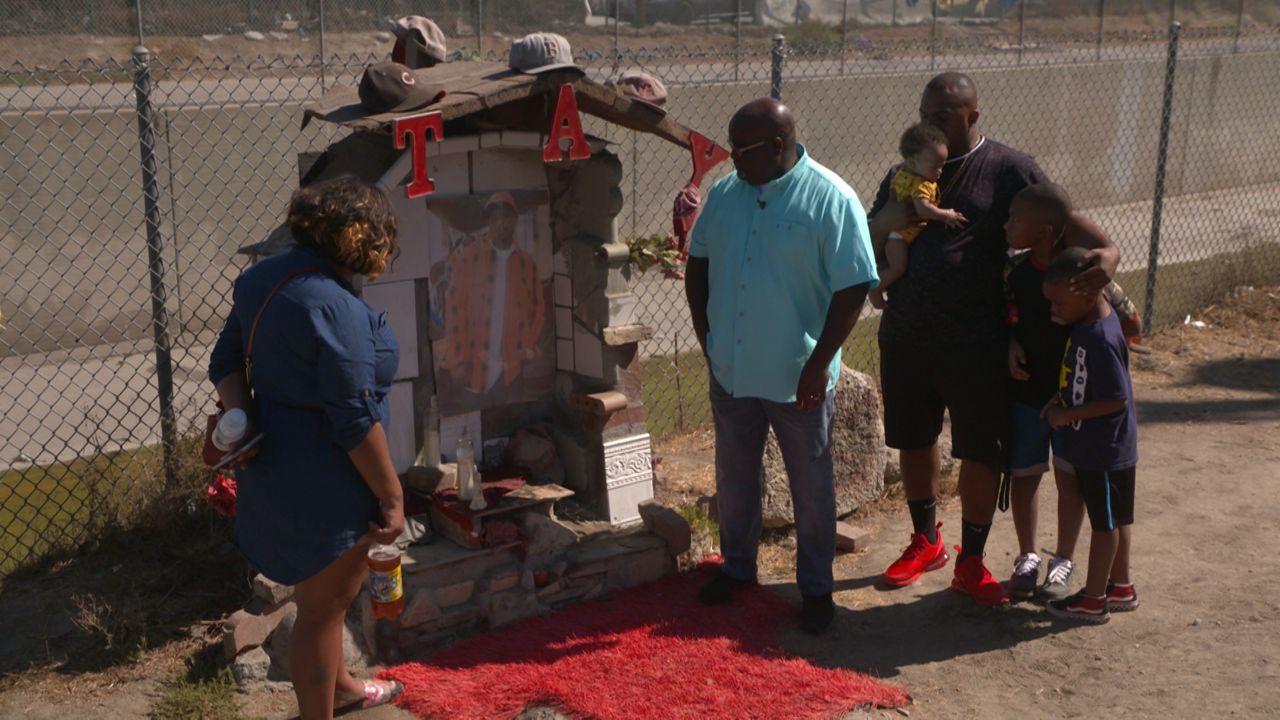 COMPTON, Calif. — Time has faded the photograph on his memorial along a ravine in Compton, but not the anguish of Donta Taylor’s father, Andrew. When deputies shot and killed his son in 2016, they said he was pointing a gun.

No weapon was ever recovered from the scene. There was no video of the shooting.  The only two witnesses were the deputies who opened fire.

“I’m sick of watching this happen over and over again unjustly and it’s about time all this comes to an end,” Andrew Taylor said in a recent interview with Spectrum News 1.

It was August 2016 when Donta walked down Wilmington Avenue to buy cigarettes and a Sprite at a nearby market. Los Angeles County Sheriff’s Deputies Mizrain Orrego and Samuel Aldama said he was dressed like a member of a local gang. The deputies, who were working gang suppression detail, said Donta flashed a gun and took off running.

“He was frightened and he ran,” said the Taylor family’s lawyer, John Sweeney.

Taylor ran down the street, through a neighborhood and along a nearby ravine. The chase took just three minutes according to an analysis by the District Attorney’s Office.

It ended with both Orrego and Aldama shooting Donta dead. Orrego said Taylor turned toward him and pointed a gun in his direction and that he was afraid for his life when he opened fire. But when investigators searched the site of the shooting and the ravine they were unable to recover a weapon.

“They brought gun-sniffing dogs, they brought metal-detectors, they were shaking the trees,” Sweeney said.

Forensics investigators found gunshot primer residue inside Taylor’s underwear and shorts, but none on his hands. The analysis from the district attorney’s office said the residue showed Taylor was “in possession of a gun at some point.”

The Taylor family won a civil suit over the case. When Sweeney deposed Deputy Aldama, he revealed he had a tattoo on his leg associated with a clique inside the Compton Sheriff’s station known as the Executioners.

As of 2019, Aldama was still on the payroll of the Sheriff’s department. In 2020, whistleblower Deputy Art Gonzalez testified the Executioners were still an open secret at the station. Under oath, he testified members of the clique were known to falsely claim suspects were armed in order to justify force.

“And again, this is common knowledge, where they’ll say they see a person running with a gun but then there’s never a gun recovered,” Gonzalez said.

Sheriff Alex Villanueva told Spectrum News 1 Gonzalez’ complain was handed over to the FBI and he’s launched an internal investigation into the clique allegations. Villanueva said he will hand the investigation over to District Attorney-elect George Gascón’s office for possible prosecution when it’s finished.

“So we’re using the new policy that I created, one that bans these cliques from forming of any type of activity that harms the community … we’re holding our employees accountable,” Villanueva said.

As for Taylor’s case, former District Attorney Jackie Lacey admitted Taylor was likely unarmed when he was shot and killed along the ravine, but declined to prosecute the deputies. Her analysis included Taylor’s criminal history but none of the allegations of gang-like activity inside the Compton Sheriff’s station.

“There is compelling evidence in this case that Taylor was armed during the foot pursuit, but may have discarded the firearm during the chase and was unarmed when the shooting occurred. However, there is insufficient evidence to prove beyond a reasonable doubt that Aldama and Orrego did not act in self-defense and the defense of others when they fired their service weapons at Taylor,” the report said.

“There is no statute of limitations for murder,” Sweeney said.

They’re hoping renewed calls for accountability will translate to justice for their family.