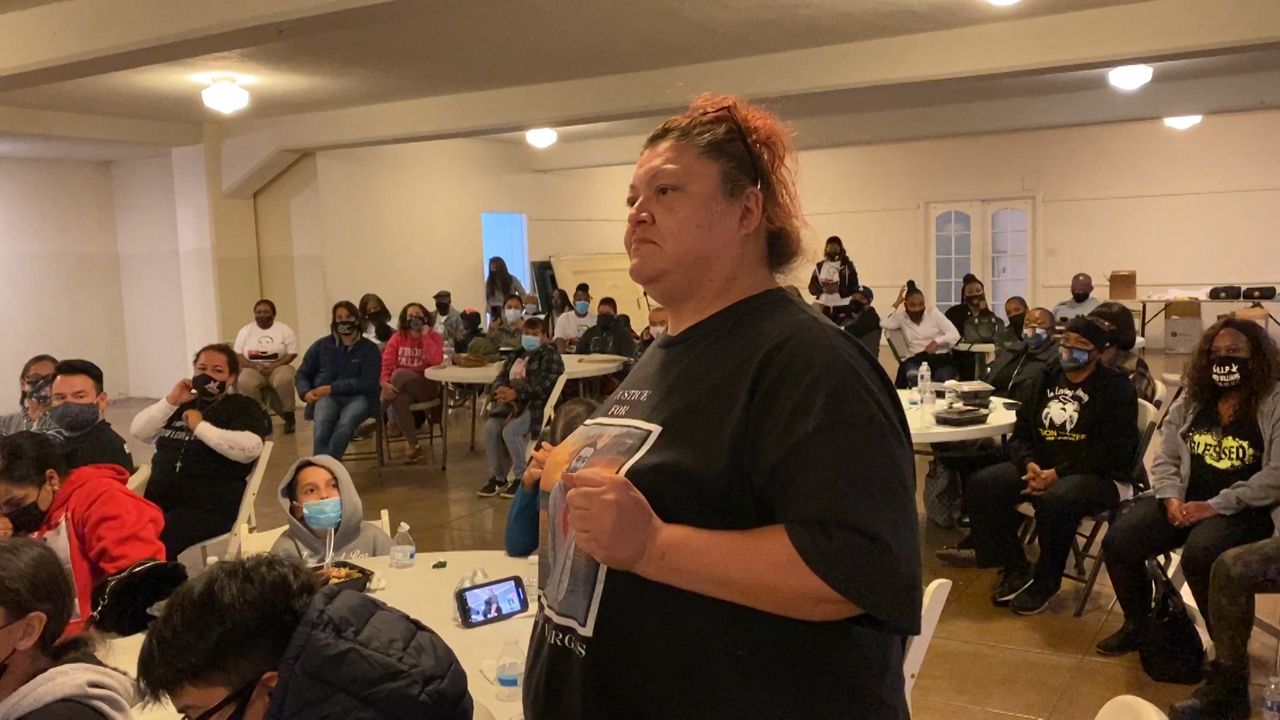 LOS ANGELES – On August 12, 2018, Los Angeles Sheriff Deputies were looking for a robbery suspect when they shot and killed Anthony Vargas in the Nueva Maravilla Housing Community.

“They had their representatives come out and say ‘You know, my bad, it wasn’t him,’” she said at a meeting Monday with L.A. County District Attorney-elect George Gascón.

Vargas was one of about 70 family members who gathered in the basement of McCarty Memorial Christian Church in the invite-only event organized by the L.A. chapter of Black Lives Matter.

It was Gascón's first meeting after defeating incumbent Jackie Lacey to lead the largest prosecutor’s office in the nation.

“I used to say the system is broken, but I’ve come to the conclusion that it’s doing exactly what it’s designed to do,” Gascón told the group, as he promised to change a system rooted in systemic racism and inequality.

BLM-L.A.’s vocal criticism of his predecessor helped Gascón be elected, but the group never endorsed him.

On Monday, family members pleaded for him to reopen officer involved shooting cases that Lacey declined to prosecute.

The meeting grew intense at times, as the families demanded accountability.

“You have to understand that we’ve had so many people promise stuff,” Vargas said. “This can be a clean slate but he needs to earn our trust.”

Anthony’s family described him as a gentle giant who was active in his community. Investigators said they recovered a gun under his body after deputies shot him 13 times, but it did not have his fingerprints or conclusive DNA.

The family believes the deputies were involved with the “Banditos,” a tattooed deputy gang that controlled the East L.A. Sheriff’s station until it was disrupted in 2020, two years after Anthony’s death.

Sheriff Alex Villanueva has either suspended or terminated 26 deputies who worked at the station in an effort to clean house. However, when former DA Lacey declined to charge the deputies in Anthony Vargas’ shooting, her 14-page report never mentioned the Banditos allegations.

“We can’t be the full mothers that we want to be because our child is gone,” Vargas told Gascón in an anguished tirade in the church.

Gascón listened patiently as broken-hearted families demanded justice one after another, describing a callous system where families felt harassed and even victimized after officer-involved shootings.

The former LAPD assistant chief promised it would not be their last meeting and told Spectrum News 1 that law enforcement should also be involved in the future.

The former San Francisco DA also tried to set expectations. He has already identified four cases to re-examine – Anthony’s case is not one of them. A single case might take three to four years to litigate. He is looking for cases he can win.

“There’s a lot of cases and to do the work right we have to go into it deeply,” Gascón said.

It was a night for BLM-LA to flex their political power, promising to protest and even come to his private address if Gascón fails to live up to their expectations.

In response, Gascón told the group he does not take kindly to threats.

“I am here because I am committed to doing a job the day you think I’m not doing my job, that is the day I leave and you can have someone else,” Gascón said.

The group helped get Gascón elected. Now, they are expecting their day in court.

“I am here because I am livid,” @GeorgeGascon says after the families finish speaking. He says they’ve already identified 4 cases and there will be others considered for reopening. “My goal is when a police officer uses force it’s because there are no other alternatives.”